Here's the Story Behind That Anti-Trump Billboard in Downtown Phoenix

The 40-foot-wide billboard is located on Grand Avenue, between 10th and 11th avenues. Moore owns the property below it, which is home to the 11th Monkey clothing design shop owned by Ruben Gonzales. She invited Los Angeles artist Karen Fiorito to create the billboard after Trump’s election, and had it installed early Friday morning, March 17.

The billboard features Trump’s face flanked by not only the swastika-like symbols, but also nuclear mushroom clouds that incorporate clown imagery. The swastika/dollar sign hybrids originated with New York artist Hugh Gran, who granted Fiorito permission to use them. On Trump's label, there's a small Russian flag pin.

Before Fiorito’s art was installed, the billboard featured a pro-recycling message.

Now the billboard is stirring significant controversy, including death threats against the artist. Moore says she isn’t granting interviews, but Gonzales doesn’t mind speaking out. “The art is definitely setting off emotions in people, and we’ve had a decent amount of hate calls and e-mails,” he says. 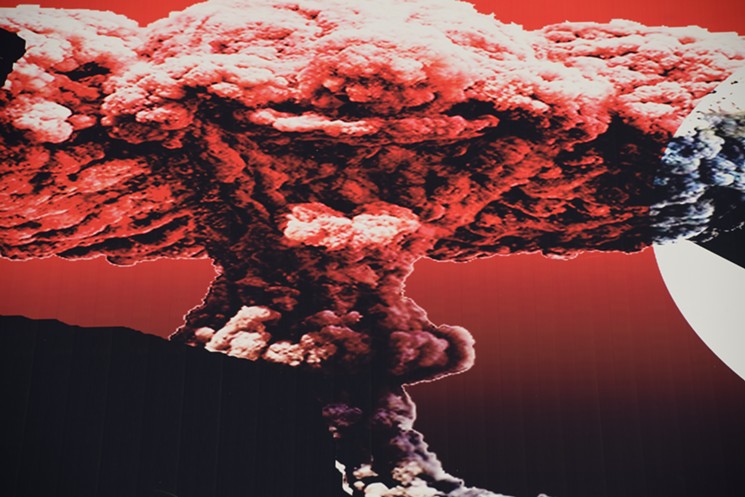 Careful observers will spot the clown image in this nuclear explosion cloud.
Karen Fiorito/Photo by Lynn Trimble
On Sunday, March 19, a pair of protesters spent several hours in front of the store, holding pro-Trump signs with visible guns in tow. But Gonzales says he's also heard plenty of support from area business owners and people coming in to shop because they heard about the billboard.

Fiorito originally said that she donated her artwork for the billboard, but has since told New Times that she received a stipend for the project, which also includes a 24-foot image on the back of the main billboard. ("I was really trying to protect Beatrice," Fiorito says in an e-mail, regarding her original statement about not being paid. "I wanted to take full responsibility in case of violence.")

For the opposite side of the billboard, Fiorito went with a series of five hands spelling out the word “unity” in sign language. “The plan is to have them up for one to four years,” she says. “If things get crazier, we might have to update them.” 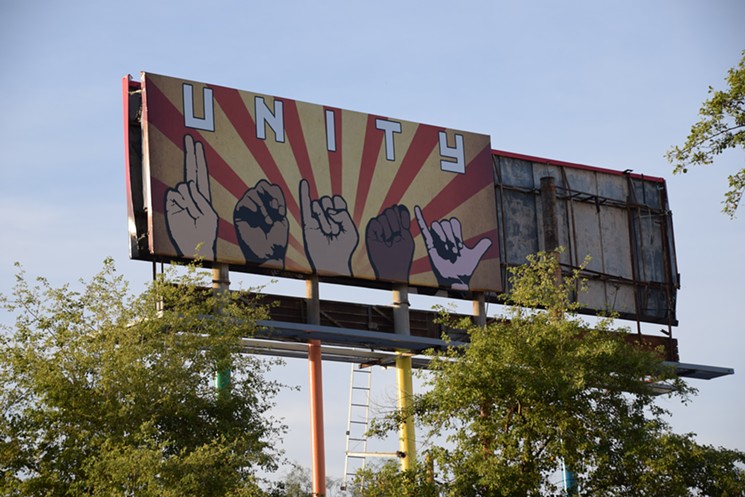 Back panel of Karen Fiorito's anti-Trump billboard on Grand Avenue.
Lynn Trimble
Each side of the billboard reflects Fiorito’s own politics. She opposes Trump’s takes on immigration, reproductive rights, and militarization. And she questions Trump’s budget, citing cut funding for public broadcasting and the arts, despite tax breaks for millionaires.

“Everything is so apocalyptic and intense right now,” she says. “It feels like we’re about to explode.”

Still, she wants to highlight the power of resistance and the beauty of diversity. Hence the unity message, with hands in different skin tones, on the back of the billboard. “I hate things that are solely negative, and I wanted to focus on the power people have when they come together.”

This billboard is the latest in a long series of political artworks by Fiorito.

Back in 2004, she designed a billboard for that same space. At the time, Fiorito was working on her master of fine arts degree at Arizona State University, where she specialized in printmaking. Coincidentally, she’d been looking for a place to create billboard art for a thesis project when she met Moore.

Previous Karen Fiorito billboard.
Lynn Trimble
Moore agreed to let Fiorito use the billboard free of charge. And Fiorito ran with it. Back then, George W. Bush was in the White House, and Fiorito wasn’t a fan. So, she created a billboard assailing Bush’s Iraq war policies. For another billboard, which was installed in Los Angeles, she took aim at Fox News.

Fiorito was hesitant to discuss more recent death threats in response to her Trump billboard, but readily shares her concern for others’ safety. “My concern is for Beatrice and her privacy, and the people who just happen to live under the sign,” Fiorito says. “I would hate for them to be harassed because of my artwork.”

“I’ve been doing political art for a long time," Fiorito says, "and it’s been kind of lonely.”

Now, she’s thrilled to see other artists entering the fray.

“For me, the art that is the most profound and moving is something that speaks to the zeitgeist of what is going on in the world.”

Editor's note: This post has been updated from its original version with new information about Fiorito being paid for her billboard art. Originally, she said she donated the work.