Randy Slack with one of his paintings for a previous "Chaos Theory" exhibition. Lynn Trimble
click to enlarge

Randy Slack with one of his paintings for a previous "Chaos Theory" exhibition.
Lynn Trimble
"Chaos Theory" will return to Legend City Studios on First Friday, October 1. For two decades, it’s been one of the largest group exhibitions in Arizona, drawing huge crowds of artists and art lovers along with people who just want to be part of the buzz.

Randy Slack, who founded the event with a handful of fellow artists, announced the news on social media on Tuesday, September 21. He’s invited 70 artists to participate, including some who’ve been in every "Chaos Theory" show and some first-timers.

Throwback to the 2017 "Chaos Theory" exhibit at Legend City Studios.
Lynn Trimble
The exhibition didn’t happen last year because of concerns about COVID-19, but now Slack is eager to resume the annual tradition. It’ll be the 21st iteration of the exhibition, which has featured some of Arizona’s most talented emerging and established artists through the years.

“I’m really excited to bring it back this year,” says Slack. “I think everybody is super ready for it.”


Slack put together the artist list about a month ago, then started inviting artists to take part. In some cases, he won’t know what they’re showing until they drop off the work and it’s time to hang the show.

“It’s just all over the place,” Slack says of his selection process. “I try to take everything happening in the Valley and bring it into one room." 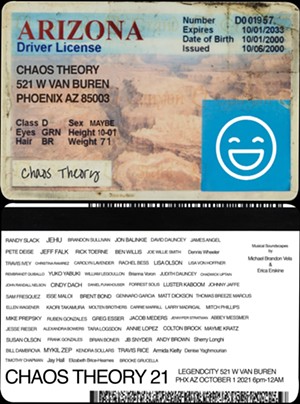 Looking back at one of Pete Deise's "Chaos Theory" sculptures.
Lynn Trimble
“'Chaos Theory' works because it brings all these artists doing their thing together,” says Slack. “It creates its own culture.”

In addition to artworks in diverse mediums, the evening will include live music and a fashion installation.

Typically, Slack creates an offbeat work of art for the show. One year it was a portrait of Burt Reynolds with a Britney Spears twist. Another year, he wedded pageant imagery with his love for VW vans.

This year, he’s got a different take.

“I always want to make a high-impact piece, but this year I’m going to try and turn a corner and make something that’s aesthetically pleasing,” he says. Odds are, it’ll be a massive landscape painting centered around water, inspired by time visiting family in Okinawa, Japan.

Nowadays, Slack lives in San Diego but makes frequent trips back to Phoenix.

As "Chaos Theory" nears, Slack says he’s feeling fortunate about the exhibit coming together this year. “It feels awesome to have created something that people want to be a part of.”

"Chaos Theory" is scheduled from 6 p.m. to midnight on Friday, October 1. The location is Legend City Studios, 521 West Van Buren Street. The free exhibit will also be open at 2 p.m. on Saturday, October 2.