It's the reason for the season. Manish Panghal/Unsplash
No, April 20 still isn't officially considered to be a national holiday. But try telling that to the legion of marijuana lovers or anyone else who considers it to be a major occasion.

Thanks to the number 420 carrying a certain significance in both pop culture and pot culture, April 20 is a day for celebrating anything and everything having to do with marijuana. Hence all the events and parties taking place in cities around the U.S. each year on or around the date, including here in the Valley.

Such will be the case again in 2022, as there will be numerous 420-related celebrations in metro Phoenix on Wednesday, April 20, as well as events happening both before and after the big day. It ranges from festivals like Buds-A-Palooza and Cannaval to concerts at local bars and various sales at dispensaries and smoke shops.

To help you keep track of everything that’s going on this year, we've put together the following rundown of every 420 event going down in the Valley. Read on and smoke ‘em if you got ‘em. HotRock SupaJoint is scheduled to perform at Buds-A-Palooza.
Benjamin Leatherman

Fifth and Garfield streets
Gather up your buds and head for this eight-hour block party on Friday, April 15, along Fifth Street south of Roosevelt Row. Highlights include screenings of pot-inspired movies like Half Baked and Up In Smoke, sets by local stand-up comics in the Zen Leaf comedy lounge, a massive vendor village, 18 different food trucks, and multiple glass-blowing demos. A huge live music lineup will be headlined by reggae-rock acts Passafire and Tomorrows Bad Seeds and also feature performances by local artists and acts like The Stakes, Scattered Melodies, The Nutter Tut Band, HotRock Supajoint, Snailmate, DJ Xara, and The Phoenix Funkeros. Hours are 4:20 p.m. to midnight. A portion of the proceeds will benefit Trees Matter, a local environmental education nonprofit. Tickets are $20 to $25. More details are available here.

All N One Smoke Shop

Five Valley Locations
Every Sky High Smoke Shop will be hosting a two-day “420 Fest” on Tuesday, April 19, and Wednesday, April 20, with various discounts available each day. To wit: you can score 50 percent off almost everything (with the exception of tobacco and other selected items) from 8 a.m. to 4:20 p.m. on Tuesday. The stores will also offer a 35 percent discount on most items (again, excluding tobacco and certain other products) from 4:20 p.m. to midnight on Tuesday and Wednesday. Select vaporizers and any brand of e-juice will also be 25 percent off from open until close on both days. A huge raffle will also be held for glass, smoking accessories, and other items. Tickets are $5 each or three for $12. More info is available on Sky High’s website. The exterior of HQ Vape & Smoke in Tempe.
Benjamin Leatherman

219 West University Drive, Tempe, 480-496-6093
HQ's 420 celebration features a variety of discounts on Wednesday, April 20, including up to 40 percent off locally produced glass items (Zong, Royal Glass, Graffix, Sik Glass, Home Blown Glass) and up to 60 percent off American-made glassware like Zob, Roor, HVY, and Clover. Grinders will also be on sale with 35 percent off SIK and Ripper grinders, 35 percent off Tahoe, and 25 percent off SLX and all other grinders. Customers also score up to 60 percent discounts on Heady Glass, 20 percent off all RAW products, spin a prize wheel, or partake in other deals. Access to the store is limited to those 21 and over only. Hours are 10 a.m. to 10 p.m.

14620 North Cave Creek Road
A slew of local reggae, reggaeton, and hip-hop artists will perform at the annual 420 Bash on Wednesday, April 20, including Papimsh, Welex, Snotty, Rufflez, Perro Toro, Siniestro, and others. Doors are at 4:20 p.m. (natch) and admission is $5. 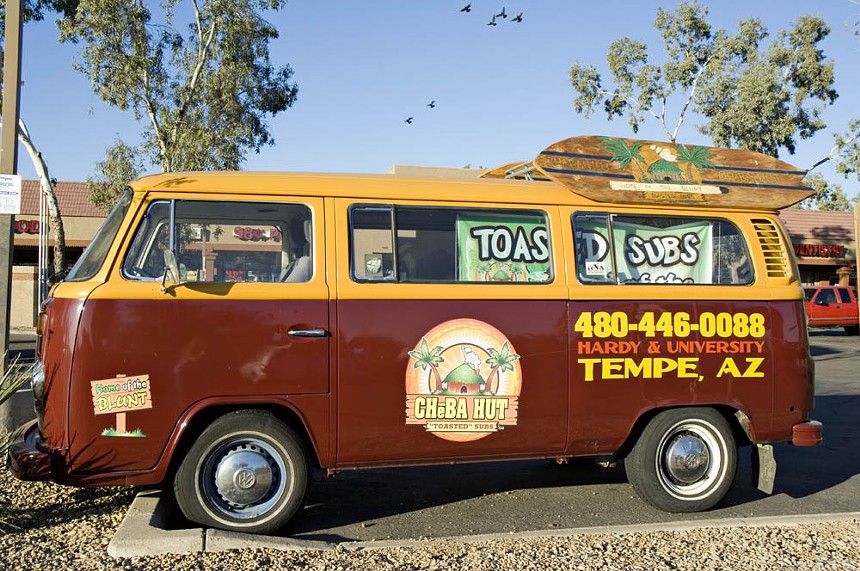 Of course, Cheba Hut will be having some 4/20 parties. Duh.
Jackie Mercandetti

Six Valley Locations
Every metro Phoenix location of this ganja-themed sandwich chain will celebrate the "smoke, smoke, smokiest time of the year" on Wednesday, April 20, with giveaways and all-day specials. Any "nug" sandwich with chips and a drink will be available for $4.20 and include a souvenir frisbee. Hours are from noon to midnight.

2209 North 99th Avenue
The inaugural Cannaval (think “carnival meets cannabis”) on Saturday, April 30, will include live music from Authority Zero and other local bands, various DJs, a large vendor expo, and other thrills. Live entertainment will include lucha libre wrestling matches, as well as jugglers, aerialists, stilt walkers, and fire artists. The event runs from noon until midnight. Admission info is available on the Cannaval website.

1917 North Scottsdale Road, Scottsdale, 480-361-6723
This south Scottsdale smoke shop will host a block party on Friday, April 22, and offer its patrons free dabs and flower. No joke. They'll also have live glass-blowing demonstrations, tarot readings, food and drinks, vendors, and even a yo-yo workshop. Because, why not? Hours are from 5 p.m. to midnight.

13831 West Glendale Avenue, Glendale, 623-935-5810
Live music, prize raffles, a blunt-rolling contest, and other activities will happen at the 420 Freedom Fest on Wednesday, April 20. The event, which is put on by The Piperazzi online smoke shop, will also include food and drink, a 420 trivia contest, a cannabis-inspired costume contest, and vendors. A lineup of local rappers like Lil Flip, Knotty Kidd, Pushing Pluto, Dr. Thraxxx, Nuggy G., and Murkems will perform. The event starts at 3 p.m. and goes until 1 a.m. General admission is $25, VIP tickets are $45, and sponsor packages (which include a variety of perks) are $200. Call 602-501-4787 for more details.

12208 North 32nd Street, 602-404-7178
4132 North 41st Place, 602-314-6995
933 East University Drive, Suite 109, Tempe, 480-921-7473
Each location of It's All Goodz will have discounts of 20 to 50 percent off everything on Wednesday, April 20, as well as "buy one, get one at 50 percent" deals on select glass items. There will also be giveaways throughout the day, free drinks, and a free raffle (the drawing will be at 4:20 p.m.). The 32nd Street location will also host a live glass-blowing demo by Jon Fischbach on Tuesday, April 19, and Wednesday. Hours vary by location.
KEEP PHOENIX NEW TIMES FREE... Since we started Phoenix New Times, it has been defined as the free, independent voice of Phoenix, and we'd like to keep it that way. With local media under siege, it's more important than ever for us to rally support behind funding our local journalism. You can help by participating in our "I Support" program, allowing us to keep offering readers access to our incisive coverage of local news, food and culture with no paywalls.
Make a one-time donation today for as little as $1.