Big Surf Waterpark in Tempe Is Being Demolished 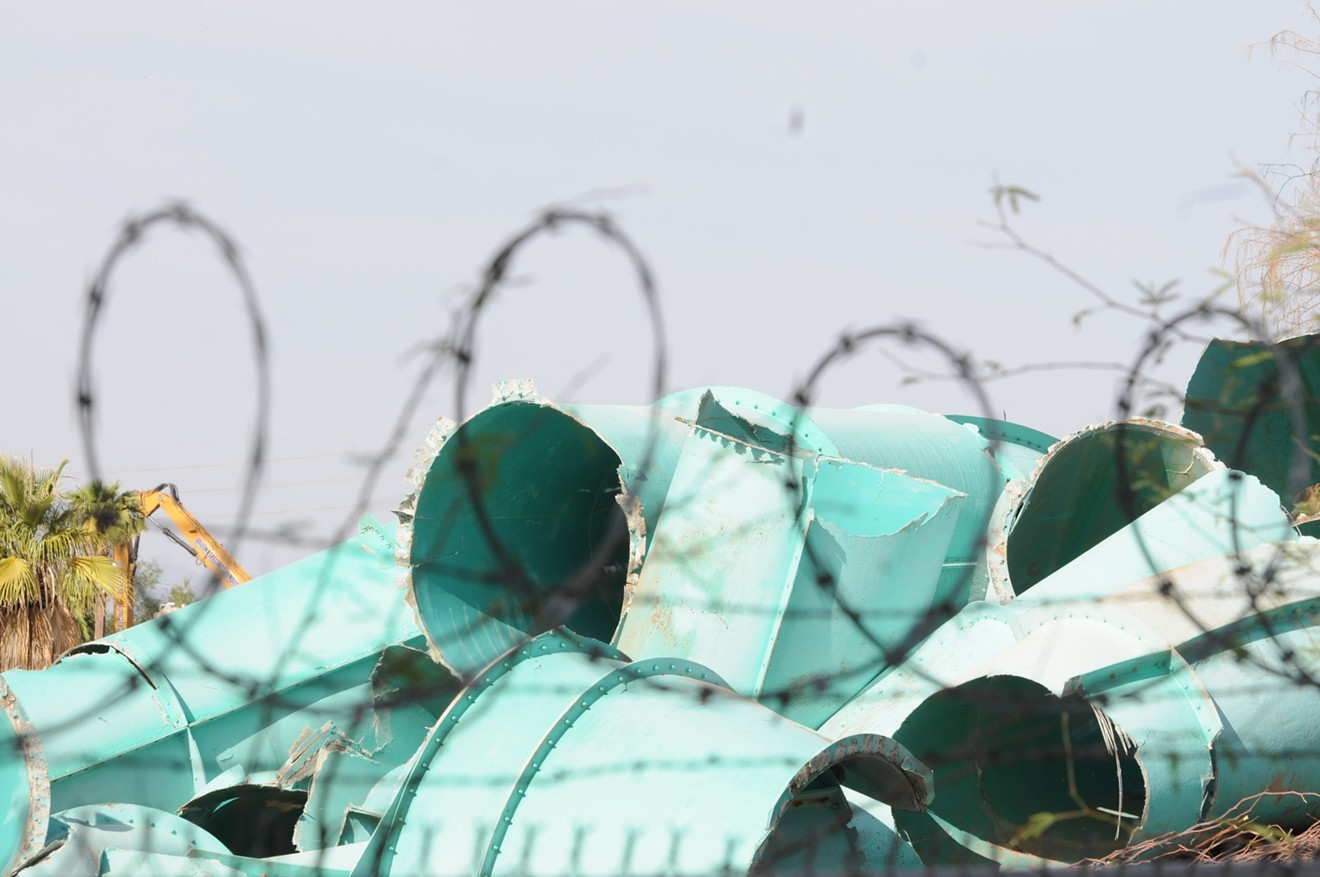 The remains of one of Big Surf's water slides. Benjamin Leatherman
Tempe’s iconic Big Surf Waterpark, summertime destination for more than 50 years, is now nothing more than a memory. The legendary Valley attraction is currently being demolished after being sold to new owners in April.

Crews from Phoenix-based company Arizona Specialty Demolition have been tearing down the various buildings, waterslides, and amenities of the 35.5-acre water park since the beginning of June. According to the City of Tempe, the demolition process should take another few weeks to complete.

It’s transformed what was once a colorful oasis of waterslides and sparkling azure-colored pools into a rubble-strewn wasteland dotted by the twisted remains of Big Surf’s various slides and attractions.

Broken turquoise-colored fiberglass tubing is haphazardly arranged in an enormous pile in one corner of the park. Big Surf’s historic Waikiki Beach wave pool is littered with bits of broken concrete. Broken wood and destroyed signage are everywhere. Big Surf is now a wasteland of broken concrete and demolished buildings.
Benjamin Leatherman
It’s the final chapter in Big Surf’s lengthy legacy, stretching back five decades. The water park originally debuted in 1969 and featured the first wave pool in the U.S.

After providing locals with fun in the sun for 50-plus years, Big Surf closed in March 2020 after its owners, Texas-based LLC Inland Oceans, shut down the park after the COVID-19 pandemic reached Arizona.

Numerous other local water parks, including Six Flags Hurricane Harbor in Glendale and Mesa’s Golfland Sunsplash, have since reopened, while Big Surf remained closed and its wave pool and water slides stayed dry.
click to enlarge The interior of Big Surf's historic and iconic wave pool.
Benjamin Leatherman
Save for a pair of concerts in May 2021 (the Punk in the Park and Back to the Beach festivals) in Big Surf’s wave pool and various pop-up drive-in movies and flea markets in the parking lot, the property was a relative ghost town.

As Phoenix New Times first reported in February, Inland Oceans put the property up for sale and auctioned off all of the water park’s assets.
click to enlarge One of the many water slides inside Big Surf.
Benjamin Leatherman
In April, Inland Oceans sold Big Surf and its surrounding property to Southern California-based real estate developer Overton Moore Properties for more than $49 million.

OMP hasn’t announced what its plans are for the property. The company is described as having “an extensive background in developing quality industrial projects throughout the southwest,” and its website touts such previous projects as industrial parks, storage facilities, and warehouses.
KEEP PHOENIX NEW TIMES FREE... Since we started Phoenix New Times, it has been defined as the free, independent voice of Phoenix, and we'd like to keep it that way. With local media under siege, it's more important than ever for us to rally support behind funding our local journalism. You can help by participating in our "I Support" program, allowing us to keep offering readers access to our incisive coverage of local news, food and culture with no paywalls.
Make a one-time donation today for as little as $1.