Legendary voice actor Billy West during his panel at Phoenix Fan Fusion 2022 on Saturday, May 28. Benjamin Leatherman
There's an entire generation of kids and adults raised on the work of Billy West. And he knows it, for better or worse.

"I don’t have any family left," West said during his early afternoon panel at Phoenix Fan Fusion 2022 on May 28. "I just have my brother left. So to be considered family by so many, it’s an honor to me."

And it's been quite the cast of characters that West's brought into the deeply impressionable lives of folks across the world. Whether that's Ren and Stimpy from the '90s cartoon; Philip J. Fry, Dr. Zoidberg, and Professor Farnsworth from Futurama; or, yes, even the Red M&M, West’s trademark peculiarity and humor molded folks as much as it entertained and comforted.

But while West is one to admit he's just a "weird kid" who got lucky, the story of his roles and his larger life as an entertainer paints him as more than just our beloved silly uncle. Instead, there are repeating patterns and relationships, lots of skill to coincide with all that luck, and nuance and understanding that shows the real depth of West's body of work. In short, West's story is as much about escapism as it is about confronting the heady parts of life with joy and commitment.

Here are nine examples of why Billy West is the clown prince of life-affirming entertainment.

Rock Music Was the Gateway to Voice Acting

Growing up in Detroit in the early ‘60s, West was treated to the ever-popular Looney Tunes, albeit in a less than desirable format.

That initial interest then saw West then "move into sound," which started with joining bands before eventually making it into voice acting.

Not that he was always the most capable of musicians, of course, or even able to discern "true" talent.

"All my friends were J. Geils and all the guys in Aerosmith," West said of a youth spent in Boston. "I did, though, think these guys are never going to make it. What kinda name is Aerosmith anyway?"

Luckily, he's had his own success in music, including his own group, Billy West and The Grief Counselors. But it was working for another legendary musician that let West the musician really shine.

"I was playing with Brian Wilson, and we got to play the same stage as The Beatles when we did [Late Night with] David Letterman," he said. "Brian was the closest to an angelic being I've ever met." 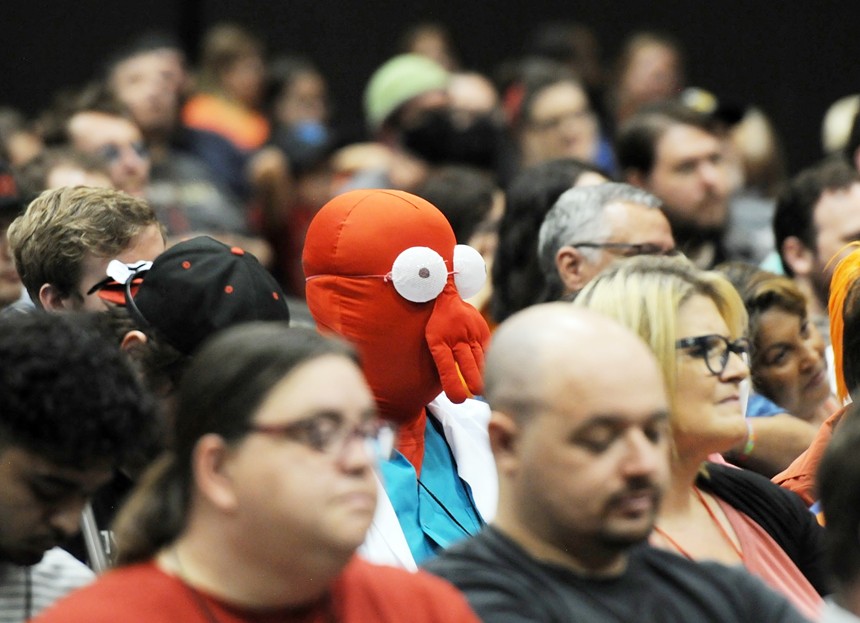 A Zoidberg cosplayer in the crowd during Billy West's panel at Fan Fusion.
Benjamin Leatherman

West Was Influenced by More Than Mere Cartoons

When asked by an audience member about his most "challenging" roles, West said his childhood meant all that stuff eventually came easy.

"In doing voices, I've never struggled with anything," he said. "I was a weird kid, running around screaming voices. My aunt thought I was weird, and my dad thought I was stupid. I had a hard time tying my shoes. Or buckling a seatbelt. That’s autism for you."

His interests also meant that he looked for other forms of inspiration, including old-school Yiddish comedians and actors.

"With the Yiddish influence, I wanted to do something that would last forever. Outlast me," he said. "So, for instance, Zoidberg is like the marble-mouth old-time actors from Vaudeville. Someone like George Jessel. They'd say things like, 'You know the definition of a smart ass? Someone who can sit on an ice cream cone and tell you the flavor.'"

His Life Has Been Marked by Wonderful Recurrences

If there were a common thread among both West's panel and his career at large, it's how connected things often feel, and how both people and themes repeat in splendid ways. Case in point: when West offered a story about Futurama co-star Katey Sagal.

"I got to guest on that Joey Lawrence show, Brotherly Love," West said. "So one time, I walked outside the building where we're shooting, Columbia Studios in Hollywood, and I saw this woman on a payphone (that's when they still had them). That’s Katey Sagal — and she looked at me like I was invisible. And now she’s my girlfriend on Futurama. She was part of my future and I didn’t know it. So you never know what will happen."

The M&Ms Are a Much Bigger Deal

Not even Fry or Stimpy can be considered West's most "iconic" role. No, that goes to the Red M&M, something which West seems both amused by and especially proud of.

"You know that Christmas commercial?" West asked. "I made that 30 years ago."

Perhaps that role is near and dear to West because, after the brand originally went with John Lovitz (Red) and John Goodman (Yellow), he had to audition five times, "pulling out every trick to impress them." It may, however, have everything to do with his co-star.

"I came home one day, 28, 29 years later, and my wife said, ‘Come and see this show Oz,'" West said. "There's the absolute worst guy, this total racist psychotic. And my wife said, 'He’s no actor; he's the real deal.’ I said I know him. He’s the Yellow M&M — it’s J.K. Simmons. I worked with him for that long. One time, he won an Oscar, and two days later he's doing a commercial with me. That’s the mark of a true actor; celebrities are not my heroes, actors are."

He Got a Career Assist From Phil Hartman

And speaking of beloved actors, West also had nothing but praise for a few famed comedians who'd passed away. The first was Phil Hartman, who, in a way, gave West an opportunity on Futurama.

"At the time, I was working on The Howard Stern Show," West said. "And one day my wife said, 'You know who called? Phil Hartman.'  He'd called to say that he was a fan, and I said, 'Gee, I kind of know who you are.' Phil said if I moved out to L.A., he'd help [me] get roles. And a guy like me would move from studio to studio. We even did an M&M commercial together, where he was [a chocolate bar]."

Hartman died in 1998, and around that same time, West was beginning work on Futurama. In creating the voice of Zapp Brannigan, West relied on their shared love of vintage media.

"Phil and I both loved radio," West said. "I used to call them those big dumb announcers. Those guys who you thought were always lying. 'Friends, do you know what we need? Really need? Coffee!' Who talks like that? So something like, 'Kip, tell the man I mated with a woman.' Or Jeanine Pirro from Fox [News], who takes 45 minutes to say something that could be 30 seconds. Deliberate and deliciously stupid."

Gilbert Gottfried Was Firmly on His Mind

The other fallen comedian that West had in his thoughts was Gilbert Gottfried, who he said had a rather unique talent that would have proven especially valuable these days.

"He rebranded tragedy," West said. "He was unafraid in the face of horrific tragedy, in the face of cracking someone up in the face of something horrible. There’s plenty of time to figure out what happens with that town and that kid [the shooting in Uvalde, Texas]. But I’m glad to be here. I’m framing this in the gallery of my mind."

And West was clearly channeling Gottfried when he doled out a one-two punchline just as someone brought up the subject of Aquaman.

"Who is gonna replace [Amber Heard] in the film?" West said. "Maybe it'll be Kevin Hart. I wish I could cut his foot off and carry [it] like a rabbit's foot. All these good things start happening to me."

West was also asked about a proposed Ren & Stimpy reboot from Paramount. While he'd happily join the cast, he also mused that the show's take on comedy might be unpopular nowadays.

"I don’t know how they’re going to do it in this climate," he said. "I guess I’d be offended if I had no life experience at 20."

He added, "I made a joke about Rush Limbaugh dying. I said he invented hi-def radio; he was high and deaf." West said some people "always see from this kind of tunnel vision — ‘What do you do for a living? I get upset.’ Comedy is subjective. Some things aren’t for anyone. It is what it is, not a target to be shot down. It's easy to shoot from the peanut gallery. I don’t care anymore. I'm 70, and I don’t have to explain. I’ll do it. I’ll keep coming till they don’t let me come in anymore."

A Doug Remake, on the Other Hand, Seems Plausible

West won't work for Disney, explaining that he doesn't agree with their schedules for voice actors. However, he's keen to revisit another beloved '90s Nickelodeon character.

"I'd love to do Doug," West said. "They're 25 years older, so just imagine. 'Dear diary, today I blew up a courthouse.' Have Roger Klotz as the judge. 'Funnie, I'm sending you up the river. I knew I’d see you. You've got guilty written all over your face, and it’s even spelled wrong!'"

If West's attitude toward the younger generation seems a little harsh, it may be that he comes from a different time and is, admittedly, out of touch with current politics. In sharing a story about Vietnam, West revealed his own form of political "protest" for Richard Nixon.

"I was almost drafted in the '70s," he said. "I went down and got tested. There was a shrink there — you’re not supposed to know, but I could tell. He asked, 'You like sports?' and I said I like tennis ‘cause you don’t have to depend on anyone else. I also had the flattest feet in the world, and hypertension, so I couldn’t get in."

But the moment stuck with West, and Nixon's handling of the Vietnam War, and his other missteps and controversies, helped inform West's supervillain-esque portrayal of Nixon in Futurama.

"The producers asked me why I’d said, ‘Aroooo,'" West said. "And I just thought Nixon was always turning into a werewolf. And now there's a continuous loop of the stuff I did in Futurama in his presidential library, so I won."
KEEP PHOENIX NEW TIMES FREE... Since we started Phoenix New Times, it has been defined as the free, independent voice of Phoenix, and we'd like to keep it that way. With local media under siege, it's more important than ever for us to rally support behind funding our local journalism. You can help by participating in our "I Support" program, allowing us to keep offering readers access to our incisive coverage of local news, food and culture with no paywalls.
Make a one-time donation today for as little as $1.
Chris Coplan has been a professional writer since the 2010s, having started his professional career at Consequence of Sound. Since then, he's also been published with TIME, Complex, and other outlets. He lives in Central Phoenix with his fiancee, a dumb but lovable dog, and two bossy cats.
Contact: Chris Coplan
Follow:
Twitter: @CCoplan