The rush to paint Black Lives Matter murals in Phoenix is about to take a controversial turn, as the city considers whether to approve a Washington, D.C.-style street mural downtown.

Artists already have painted several murals with racial justice themes around the city. But now there's a proposal that's likely to take disagreements about the role of art in effecting change to a whole new level.

It's being presented to a City Council subcommittee meeting at 9 a.m. on Wednesday, September 2.

The mural was conceived by Gizette Knight, who drew inspiration from the Black Lives Matter street mural painted in Washington, D.C., in early June. The mural, with its 35-foot yellow letters, was painted amid protests sparked by George Floyd’s May 25 death in Minneapolis. That same day, Dion Johnson died in Phoenix after being shot by a Department of Public Safety trooper.

Knight launched a petition on the Change.org website, calling for a Black Lives Matter street mural in front of Talking Stick Resort Arena (dubbed “Phoenix Suns Arena” in her proposal) in downtown Phoenix. In just over a month, the petition garnered more than 2,100 signatures.

“This mural is about inclusiveness and unity,” says Knight. “We want the city of Phoenix to stand in solidarity with the African-American community.” Even so, not everyone agrees that a mural is what’s called for in this moment.

Black Lives Matter sign spotted during a Phoenix protest.
Jacob Tyler Dunn
Black Lives Matter Phoenix Metro opposes the mural. “It’s an empty gesture that the city council is making,” according to Miriam A., policy minister for the group, which describes itself on social media as an inclusive collective of community members who value all Black lives. “If you’re gonna make some stupid ass mural then defund the police and fund social programs for black communities.”

Miriam A. says she doesn’t use her last name because of white supremacists, by the way. She’s fine with grassroots wall murals painted by Black artists, but wants the City Council to focus on policy changes. It’s a sentiment reflected in a recent Black Lives Matter Phoenix Metro tweet reading “Less murals. More action.”

The Phoenix Law Enforcement Association opposes the proposed street mural as well. Founded in 1975, the group’s mission includes promoting “the positive role of the police profession” and protecting “members’ rights and benefits.” The association shared its views in a Facebook post on August 25, suggesting that if the Black Lives Matter mural is installed, they should have the right to install “similar portraits of our Fallen Heroes.”


Members of the Black Lives Matter movement and at least one supporter on the Phoenix City Council want to shut down one...


The association’s Facebook post drew hundreds of comments, mostly from people who agree with its position. One commenter wrote, “This is defacing public property.” Another wrote, “No graffiti period.” Other responses ranged from “Allow everything or nothing” to “Streets are no places for ads of any type.” So far, the group hasn’t responded to Phoenix New Times’ request for comment.

Knight insists that the mural she’s proposing isn’t anti-law enforcement. “There’s a stigma that the Black Lives Matter mural is anti-police, but that’s not true,” Knight says. For some, the fact that activists painted the words “Defund the Police” next to the Washington, D.C., street mural not long after it was installed suggests otherwise.

Protesters take to the streets in downtown Phoenix.
Jacob Tyler Dunn
Despite the opposition, Knight is moving forward with her proposal. She’s already talked with the city’s Street Transportation Department, and plans to make comments during Wednesday’s meeting. Meeting materials include a report created by the department, along with Deputy City Manager Mario Paniagua.

According to that report, “Installation of a mural in public rights-of-way is not currently permitted or allowed by the City.” Even so, the report says the city could consider allowing a Black Lives Matter mural as part of a street mural pilot program. If that happens, the organizer will be responsible for funding, painting, and maintaining the artwork. Knight says it’ll cost about $4,500 to create the piece. So far, she’s raised about $6,000.

It turns out that this isn’t the first time the city has explored street markings related to a specific cause. The City Council approved a program for non-standard crosswalks in 2018, which resulted in a small number of rainbow crosswalks signifying LGBTQ rights being installed in Phoenix. But the street mural would be significantly larger, and the streets department has expressed concerns on several grounds, including safety and liability. Members of the public can read the report online.

The report references three possible locations, including streets in front of the Arizona State Capitol, Phoenix City Hall, and Talking Stick Resort Arena. “This mural is powerful, so I don’t want it to be in a place where nobody sees it,” says Knight. Currently, both Knight and the Street Transportation Department are proposing Third Street between Jackson and Jefferson streets as the location, should City Council decide to approve the project.

“Additional details will be shared with the Subcommittee during the meeting,” a department representative told New Times by email on August 27. People can watch or listen to the meeting remotely, and sign up ahead of time if they want to comment on the proposal, which is one of several agenda items. (Click here to learn how to sign up to comment.) 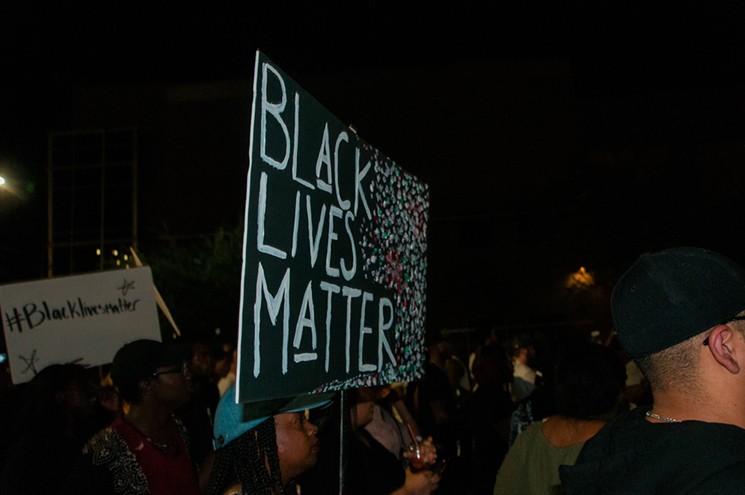 A protester holds a homemade "Black Lives Matter" sign.
Ash Ponders
But there’s a catch. A bit of fine print on the agenda indicates that the subcommittee may vote to hear the item in executive session, which means their discussion would be confidential.

“The purpose of Executive Session on this topic is for Mayor and Council to receive advice,” a City Council spokesperson told New Times by email. “If the subcommittee recommends the item, it may appear on a City Council agenda for approval, but we cannot say at this time when that may occur.” Hence, swift action appears unlikely at this point.

New Times reached out to Mayor Kate Gallego and City Council members about their positions on the proposed Black Lives Matter street mural, but only Debra Stark has responded so far. Stark sits on the subcommittee that’s considering the issue, along with Betty Guardado, Laura Pastor, and Thelda Williams.

“I believe there are more appropriate locations for murals than Phoenix streets — whatever the message or the organization,” Councilwoman Stark said by email on August 29. “For me this is truly a traffic safety concern. Unfortunately, Phoenix has pedestrian safety challenges. I don’t support an initiative that could present a hazard on our streets by confusing driver or bringing pedestrians, curious to see the mural onto the roadway.”

While some focus on safety, others will likely debate the merit of murals. “It’s about change,” says Knight. “There’s no way you can have this mural but not say you’re going to do policy change.”

Miriam A. has a different take: “Go ahead and do your little mural; it’s not helpful if it’s just to make yourself feel a little better. You’re just showboating, Phoenix. It’s backwards as hell.”
KEEP PHOENIX NEW TIMES FREE... Since we started Phoenix New Times, it has been defined as the free, independent voice of Phoenix, and we'd like to keep it that way. With local media under siege, it's more important than ever for us to rally support behind funding our local journalism. You can help by participating in our "I Support" program, allowing us to keep offering readers access to our incisive coverage of local news, food and culture with no paywalls.
Make a one-time donation today for as little as $1.