Degrassi: Next Class Finale Recap: One Last Chance to Be Free 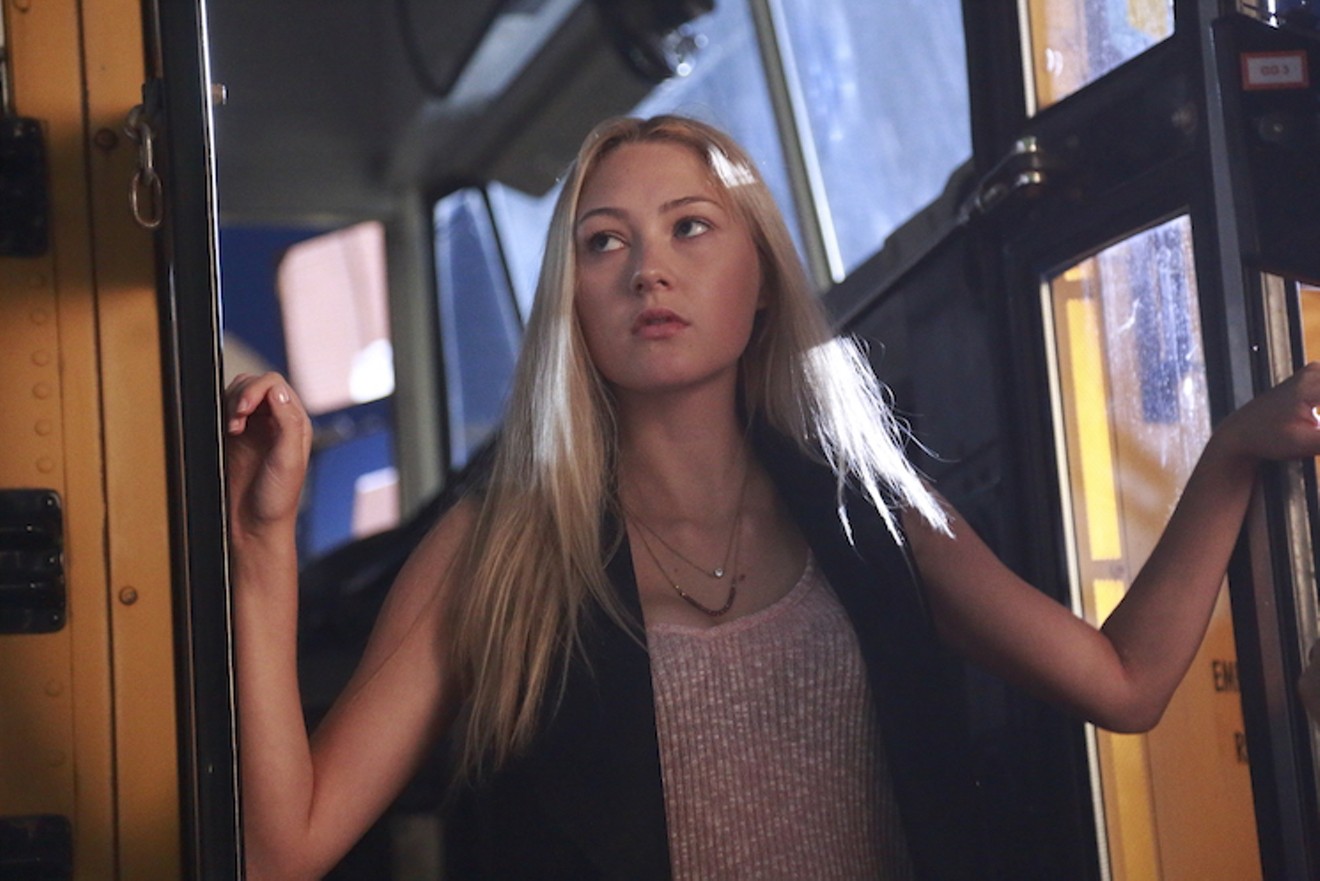 This season of Degrassi: Next Class revolved heavily around the impact of only the last few minutes of season two's finale, where the fates of a significant chunk of the main cast were up in the air following a brutal bus crash. The wounds healed and life went on as usual, but it lingered in nearly all of the major plotlines going forward.

The most profound consequence has been the toll on Maya's mental state, an already fragile one that she had successfully channeled into a burgeoning music career. However, we saw her deteriorate over the course of the season, unable to get out of bed and finding disturbing pleasure in staging "death photos" in the name of art.

Last episode, she seemed to bounce back, enjoying a visit from her older sister, Katie, and appearing to have decided to get back on track.

The finale kicks off with her doing just that, recording a new song and happily getting dressed for school. Her mom and sister take note, recalling their weekend together and feeling hopeful for the first time in months. On her way out the door, she posts the song she's been writing and calls it, "Last Exit." She packs her bag for school as normal, except this time, she includes the box full of a cocktail of pills we saw her gather at the end of episode nine.

She looks at it and smiles, as the line "last chance to be free" plays overhead.

At school, she tries to track down Grace to give her a wrapped gift for opening night of the play. She tries Zig first, but he shoos her away as his very jealous girlfriend Esme walks in. Next she sees Jonah, who begs her to give Grace the gift herself, even if they are fighting. He even goes so far as to give her a free ticket to the play.

Later that evening, Maya decides to see the play after all. She goes up to Yael and shows her ticket, which is for a seat that a hesitant Esme decided to occupy in case she wanted to ditch out on suffering through her ex-boyfriend's play. Instead of dealing with the drama of asking them to move, Maya pretends she has somewhere to be and leaves.

She heads outside to an empty school bus and finds a seat. She opens the container of pills and starts taking them one-by-one. When she's finished, she puts on her headphones and leans back, presumably ready to die in the same place she feels like she should have during the crash.

Wish you would step back from the ledge, my friend.
DHX Media Ltd.
She wakes up later on the bus, visibly disappointed that her attempt didn't work. "I can't do anything right," she says. However, she stumbles off the bus in a haze, clearly not out of the woods at all. She stares up at the roof, clearly working out a different plan. She struggles to open the door inside, just as her photography partner Saad walks by. She asks for his help with droopy eyes and slurring her speech. She apologizes to him for telling him off, wrapping her arms around his neck and barely able to stand.

In spite of this, he lets her in the door and walks away.

She drags herself up the roof and drops her headphones on the ground. She gets to the ledge and stares off, taking a moment to post a photo of the trees she sees on Hastygram with the caption, "Free as a bird." Although they had previously been blocked from her accounts, Jonah and Grace are able to see that it's her only photo posted and immediately realize something is wrong.

Before they figure it out, Esme finally talks Zig into leaving the play, luring him onto the roof to get frisky. They start to kiss when she sees Maya passed out by the edge. They run over and find her, eyes open, foaming at the mouth. Esme knows immediately that it's an OD, because after all, she's the one who found her mom after she did she same thing. She even knows to not make Maya throw up because of her experience. Instead, Zig quickly calls 911 for help.

Later at the hospital, Grace, Jonah, Zig, Esme, Tristan, Miles, and Zoë are all waiting for news. Grace laments that she should have seen this coming. There were so many signs that she was sad, but no one knew what to do. Esme comforts her, knowing good and well that sometimes, you just can't know what's going on in someone's head.

Maya's sister Katie comes out a little while later and lets them know that Maya's going to make it. She begs them to stick with her for what's going to be a long, hard battle.

It's hard to know what state we'll find Maya in next season, but we can only hope that this is the bottom she had to hit to make her way back up.

Zoë and Rasha's secret is finally out in the open.
DHX Media Ltd.
Elsewhere, the aftershock from Zoë and Rasha's break-up have become apparent to Goldi, Zoë's student council Vice President and Rasha's refugee host student. After offering help with the programs for the play, Zoë storms off, telling her she should just do it. When she asks Rasha, one of the stars, for help, she also bites her head off. She finally reveals that they were dating and just broke up after Zoë used her to force her mom's acceptance.

Goldi is hurt that she didn't know, but is aware of some of the things she's said in regards to how her religion sees homosexuality. Rasha is especially upset that she came all the way to Canada from Syria for a life where she could be free to be in a play and have her girlfriend bring her flowers without worry. Goldi starts to see her side, especially when she hears that because beyond of all of it, Zoë's been kicked out of her house.

She tracks down Zoë and asks her point blank what happened. Zoë tells her everything, and Goldi tries to offer support. Zoë admits that her focus on proving something to her mom made her lose sight of Rasha. Although her relationship with her mom is a bigger issue, Goldi declares that she wants to help fix what's happened with Rasha.

After the play, Zoë surprises Rasha with a bouquet of roses, just as she wanted. She apologizes and is immediately forgiven. Zoë shares that Goldi helped with the idea and calls her over. Goldi tells them both that it's not up to her how they will be judged, she just knows that she wants them to be happy.

Here's to hoping they will be (Zoë's mom included) next season.

You were my hope.
DHX Media Ltd.
Lastly, the episode's timeline was around opening night of Miles, Jonah, and Grace's rock opera, I.M. Hope. They're busy putting the final touches on the auditorium when Miles gets a text from Tristan that he'll be coming to the show.

He starts to panic, knowing good and well that the entire thing is about how he fell for Lola while Tristan was in a coma. He even finally admits to Grace and Jonah that they hooked up. He declares that can't let Tristan find out about everything in a room full of people.

Later backstage, Lola walks in on Miles getting dressed. He pulls her in, telling her the news that Tristan is coming. He also reveals that he's made some adjustments to the script because of it. He also ends up apologizing for what happened between them, and that he wasn't there for her when she was having an abortion. She says it's okay, but also asks if she meant anything to him at all.

"Yes, you were my hope," he says sincerely.

That night, there's a packed house for the play, including Tristan, sitting front row in a wheelchair. It starts with the sounds of a crash and screens hung across the stage featuring messages from worried loved ones. Miles appears as himself, projecting his inner dialogue as his boyfriend lays in a coma. The rest of the play is his budding relationship with Hope, played by Lola, and his eventual decision to stay with his boyfriend when he wakes up from his coma.

The play gets resounding approval, and the cast, crew and friends celebrate together afterwards. Miles goes to find Tristan, who is sitting alone in the auditorium. Miles asks him what he thought of it.

"I thought it was beautiful, it all felt very real," he says, through his his voice generator.

Miles immediately breaks down, spilling everything about hooking up with Lola. As it turns out, Tristan knew. "Between the video she posted [about her abortion] and the play, it's obvious," he says. Miles frantically tells him that it meant nothing and it's over.

"Do you love her?" Tristan responds.

He said that yes, he did, he couldn't have made it without her. However, everything that's happened was about Tristian.

In a way, that's the crux of the whole season. Tristan was the embodiment of a school grappling with tragedy, and the hope they found in his recovery. With any luck, season four will carry through that message of hope in a big way for these students.