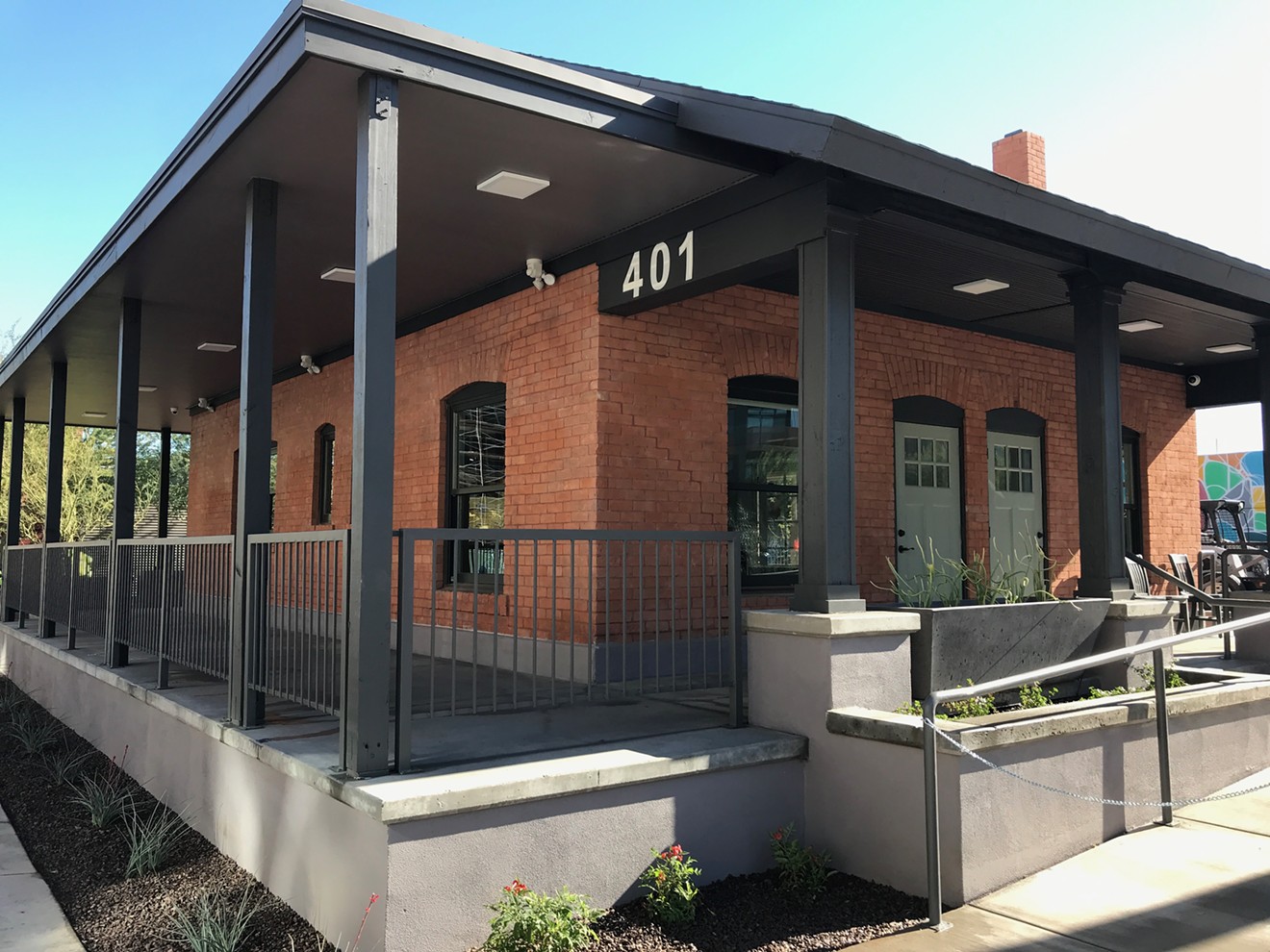 Northwest corner of the newly-renovated Wurth House at Fourth and Roosevelt streets. Lynn Trimble
It's been more than two years since Kimber Lanning saved a 1911 home from demolition in downtown Phoenix's Roosevelt Row.

The Wurth House bears the name of the family that had it built, but it's no longer serving as a home. In early January, it became an office for Local First Arizona, a nonprofit organization Lanning founded in 2003 and continues to head today.

Built in 1911, the house was originally located on the north side of Roosevelt Street. In May 2015, Lanning had the home moved to the south side of the street so that it wouldn't be demolished to make way for new development.

Before Lanning took the reins, the Wurth House was owned by Sam and Debra Moyer, who planned to demolish it and sell the land it sat on. Lanning approached the couple about preserving the home, which had been vacant for many years and marred by graffiti. They ended up donating it to her so that the structure could be relocated to the lot where it sits today. Lanning owns that lot, and another to the east. That's where she operates a gallery called Modified Arts.
For the past few years, Modified Arts has served as the Phoenix office for Local First Arizona, where 17 of the company's 24 staff members worked. Now, Lanning is expanding the Phoenix office to include Wurth House as well. Ten employees will stay at Modified Arts, and seven will relocated to Wurth House — where amenities include a conference room and kitchen.

"I'm just elated that the project is finally crossing the finish line, and thrilled that it came out so well," Lanning says. "This serves as a wonderful example of what can happen with old buildings."

In March 2015, for example, Colorado-based Baron Properties had a building at 222 East Roosevelt Street torn down to make way for a multilevel apartment complex called iLuminate. That structure had been home to Phoenix's first gay bar, and later it was used as a retail space and arts venue called GreenHaus.

Lanning hopes that the Wurth House's preservation will inspire others to save old buildings, and encourage developers to incorporate existing buildings into their designs, rather than destroying them.

"We have developers all over the city who claim you can't save old buildings," she says. "Some people thought Wurth House didn't have much value, but now it's proud and grand."

Part of the interior for the renovated Wurth House in Roosevelt Row.
Lynn Trimble
The transformation has been impressive, but it took a considerable amount of time and money.

In March 2017, Lanning estimated that renovations would likely run $225,000 to $254,000. At that point, she'd secured more than $28,000 in donations, through online crowdsourcing and small fundraising events. Today, Lanning says, she's still putting together the final cost for the project.

When Lanning moved the house to its current location, she figured renovations would take 12 to 18 months. Instead, it took 2 1/2 years. Renovations included plumbing and electrical work, and replacing elements such as drywall and broken windows. Interior highlights include a pair of original stained glass windows. Lanning also had a wraparound porch added to the building, which now has its own courtyard.

She credits Jon Kitchell of Phoenix-based Venue Projects with leading the effort to coordinate and guide the rapid pace of work in recent months. Landscape design came together more recently, led by Tempe-based RH Dupper.

Lanning is planning to hold a celebration to thank them all, but hasn't set that date yet. "I'm just so grateful," she says.

Now that renovations are done, and Local First Arizona staffers are getting settled into Wurth House, Lanning is reflective about her decision to save the 1911 building.