Fear Farm Haunted Attraction Has Moved to Glendale – Here’s Why

According to its owner, Denver-based Thirteenth Floor Entertainment Group, the new location at 6801 North 99th Avenue will offer more space for scares, a larger parking area, and easier access to the Loop 101 freeway (it’s situated between the exits for Maryland and Glendale avenues).

Fear Farm was previously located three miles south on a 32-acre property at 99th Avenue and McDowell Road from its opening in the mid-'90s through last year.

Timothy Pugsley, Thirteenth Floor’s regional operations manager, says the new location, which is 40 acres, is an upgrade from Fear Farm’s old spot for a number of reasons.


“We were on a pretty good piece of land before, but this is a prime piece of real estate,” he says. “It gives us more room for all our attractions, we’re next to the 101, and we're near Westgate [Entertainment District], State Farm Stadium, and everything else on the other side of the freeway. We’re always trying to improve Fear Farm, so moving here was kind of a no-brainer.”

Pugsley says Fear Farm’s move was also the result of the owner of its previous location, local farmer Ken Sheely, wanting to sell the property, which also hosts the Phoenix Event and Sports Complex. (Sheely was also a co-owner of Fear Farm until he was bought out by Thirteenth Floor in 2013.)

The location has been on the market for years and is still up for sale as of this writing. But when Sheely started getting more serious offers in 2020, Pugsley says Fear Farm’s owners began looking for new digs.

“We knew it was always a possibility. We had a stipulation where if he found a buyer, we’d basically be able to complete whatever season we were in and then move,” Pugsley says. “When he started having serious options for buyouts of the property last year, it got our minds spinning to be proactive and go find something on our own before we had to leave.”

After looking at other spots within a 10-mile radius of Fear Farm’s previous home in late 2020, Pugsley says they chose to lease its new location from property owner Ronald Rovey, a Sedona lawyer who is “letting us do anything we want.”

One of the haunts at Fear Farm's previous location in Phoenix.
Alexandra Gaspar
At the moment, they’re in the midst of building a new version of Fear Farm “basically from scratch,” Pugsley says. They’ll have seven weeks to do it, as it's scheduled to open its 2021 season on Friday, September 24. (Fear Farm’s sister attraction, 13th Floor Haunted House in north Phoenix, will also open the same weekend.)

Currently, Fear Farm’s new location is largely empty, save for a collection of shipping containers, old cars, and a handful of other structures. (Pugsley estimates “maybe five to 10 percent” of materials survived the move.)

“For 25 years we had a lot of stuff [on-site] that was pre-existing, but this is a brand new build from the ground up. By far, it's the biggest project our company's done in this state,” Pugsley says. “It seems like we're in a rush every year to get ready, but we always get it done. We've got a good chunk of work on our plate, but I don't feel we're behind by any means.” 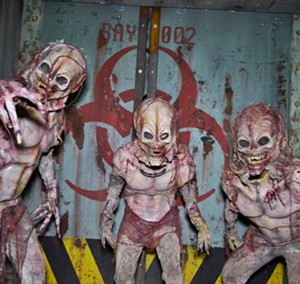 Creepy creatures from one of Fear Farm's haunts.
Alexandra Gaspar
Like its original location, Pugsley says the new Fear Farm will have four themed haunts – “Dead End Slaughter,” the post-apocalyptic “Nuketown,” “Dead In the Water,” and “Sinister Circus” – as well as a giant corn maze, which has already been planted.

“A lot of what we're doing will be based around [shipping] containers, as far as structures go. It will still have the Fear Farm feel and vibe to it, but we’ve changed things up,” Pugsley says. “I think that's the benefit of starting fresh with a property that's fully ours to utilize.”

There will also be an expanded midway area near the entrance with concessions, games, vendors, a lounge, and live entertainment. “It’s going to be a hangout place for before and after you go through [the haunts] where people can spend an entire evening out here,” Pugsley says.

Another thing being expanded is the number of patrons at Fear Farm, as the attraction had to limit capacity in 2020 because of the pandemic. Pugsley says they’re planning to allow more people through the haunt this year, but will follow any safety protocols mandated by local or state officials.

“As with any business last year, we took a hit significantly, but we were able to be open and continue to do what we're doing this year, hopefully at a bigger capacity,” Pugsley says. “And we're happy about that.”
KEEP PHOENIX NEW TIMES FREE... Since we started Phoenix New Times, it has been defined as the free, independent voice of Phoenix, and we'd like to keep it that way. With local media under siege, it's more important than ever for us to rally support behind funding our local journalism. You can help by participating in our "I Support" program, allowing us to keep offering readers access to our incisive coverage of local news, food and culture with no paywalls.
Make a one-time donation today for as little as $1.