Free Comic Book Day 2021 Is This Weekend. Here's What Local Shops Have Planned.

Comic books for sale at Gotham City Comics and Collectibles in Mesa. Benjamin Leatherman
Comic book fans of the Valley will want to clear their schedules this weekend and make room in their collections. This year’s Free Comic Book Day is happening on Saturday, August 14, and allows geeks the chance to pick up any of 50 different commemorative issues being given away at stores across the U.S.

Comparable to Record Store Day, Free Comic Book Day is an annual celebration of the sequential art form that’s taken place for decades (this year is the 20th edition). It’s a big event for both comic book lovers and store owners alike.

“Hands down, it's one of the busiest days of the entire year for stores,” says Drew Sullivan, owner of Ash Avenue Comics in Tempe.

Last year’s edition didn’t happen because of the pandemic. “They tried to pivot and change it into Free Comic Book Month, but it really wasn't the same,” Sullivan says. 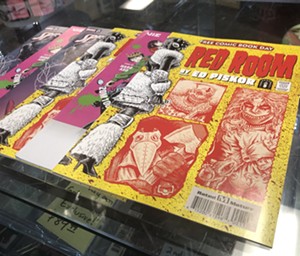 Some of the free comic books available on Saturday.
Benjamin Leatherman
This year, Free Comic Book Day organizers and store owners are going forward with the event, but are being wary of the recent resurgence in infections in connection with the Delta variant. Some, like Sullivan, are offering safeguards to protect their patrons.

“We’re encouraging people to wear masks and will also have pre-packaged bundles of three comic books for people who don’t want to stay too long in the store,” he says. “It’s just something we can do to help keep people safe and COVID numbers down.”

Phoenix New Times spoke with the staff at close to a dozen stores around the Valley to find out what they have planned for Free Comic Book Day 2021 this weekend.

WWE and ECW wrestling legend Sabu is scheduled to sign autographs at Gotham City Comics, 46 West Main Street in Mesa, during its Free Comic Book Day festivities. Autographs and selfies will be $20 each and special Sabu prints created by the artist will be available for $15 to $20. The shop will also have a performance by local rock band Manic Monkeys, appearances by local artists, and (as you’d expect) a variety of free titles to pick up. Hours are from 11 a.m. to 6 p.m. It’s free to attend. Call 480-649-3065 for more info.

Glendale's Drawn to Comics, 5801 West Glendale Avenue, will host a sale at the store from 11 a.m. to 6 p.m. Meanwhile, members of its staff will be giving out Free Comic Book Day titles down the street at the Velma Teague Library, 7010 North 58th Avenue in Glendale, from 11 a.m. to 4 p.m. (There will be a limit of two comics per person.) 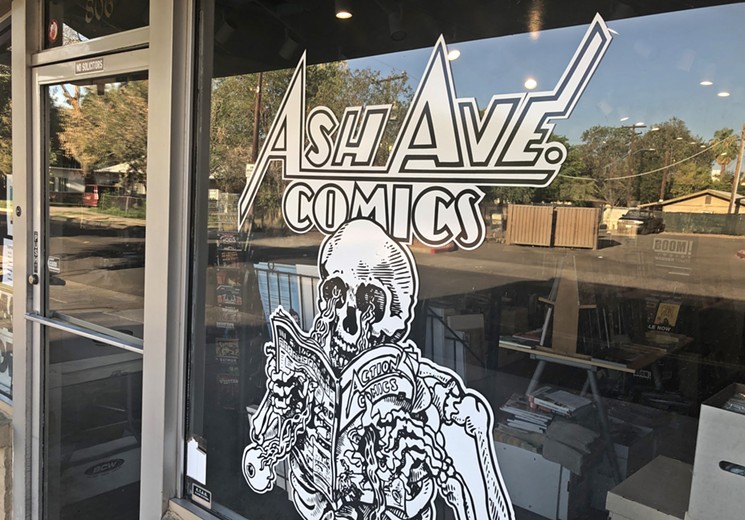 Owner Drew Sullivan says patrons can take up to five titles from the Free Comic Book Day selection. Ash Avenue Comics, 806 South Ash Avenue in Tempe, will also have a large sale with a 20 percent discount on everything at the store. Sullivan says they'll also have pre-made bundles of FCBD comics available for those who'd prefer not to get in and get out quickly because of concerns over COVID-19. Hours are from 10 a.m. to 7 p.m. Call 480-858-9447 for details.

The staff at Surprise Comics, 4763 West Cactus Road, #107, in Surprise, will be celebrating both Free Comic Book Day and their recent move to a bigger location. They’ll open at 10 a.m., an hour earlier than normal, on Saturday and almost everything in the store will be on sale. Hourly giveaways will take place throughout the day and local comic artists Eric Hinsen, Albert Morales, Derrick Tipton, Scott Serkland will appear. Patrons can also purchase “Surprise Boxes” containing three random comics for $5. The store will be open until 5 p.m. Call 623-213-7521. 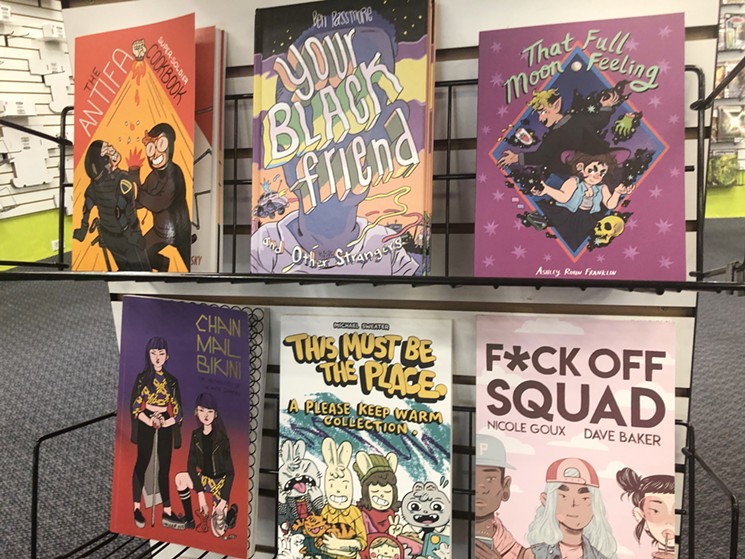 Every single FCBD title will be available at Tempe’s Monster Comic Books, 1803 East Rio Salado Parkway, #104. You’ll want to choose wisely, though, since there will be a limit of 10 issues per person. The shop will also offer sliding scale discounts up to 25 percent based on how much you buy (for example, a 10 percent discount will be available on purchases of $10). They’re also planning a $1 sale on multiple items. Hours are from 10 a.m. to 5 p.m. Call 480-508-4839.

The staff at Brandon’s Comics, 1833 East Southern Avenue in Tempe, will allow you to pick up to five free titles. All of the vintage comic books in their display cases, including classic Spider-Man issues, will be 10 percent off. Store hours are from 9 a.m. to 4 p.m. Call 480-838-0467 for more info.

Every single Free Comic Book Day title can be picked up at Dreadnought Comics, 2734 West Bell Road, and customers will be allowed to take one of each while supplies last. Various discounts will also be available. The store will be open from 11 a.m. to 7 p.m. Call 602-293-3763.

Justice Comics, 5434 West Glendale Avenue in Glendale, will offer discounted prices on prints, back issues, and sets on Saturday. When it comes to free comics, owner Jake Justice says he’ll have a variety of the official titles available and customers can get one of each. “This usually ensures most people can get what they want,” Justice says. Hours are from 10 a.m. to 6 p.m. Call 602-872-7157.
KEEP PHOENIX NEW TIMES FREE... Since we started Phoenix New Times, it has been defined as the free, independent voice of Phoenix, and we'd like to keep it that way. With local media under siege, it's more important than ever for us to rally support behind funding our local journalism. You can help by participating in our "I Support" program, allowing us to keep offering readers access to our incisive coverage of local news, food and culture with no paywalls.
Make a one-time donation today for as little as $1.