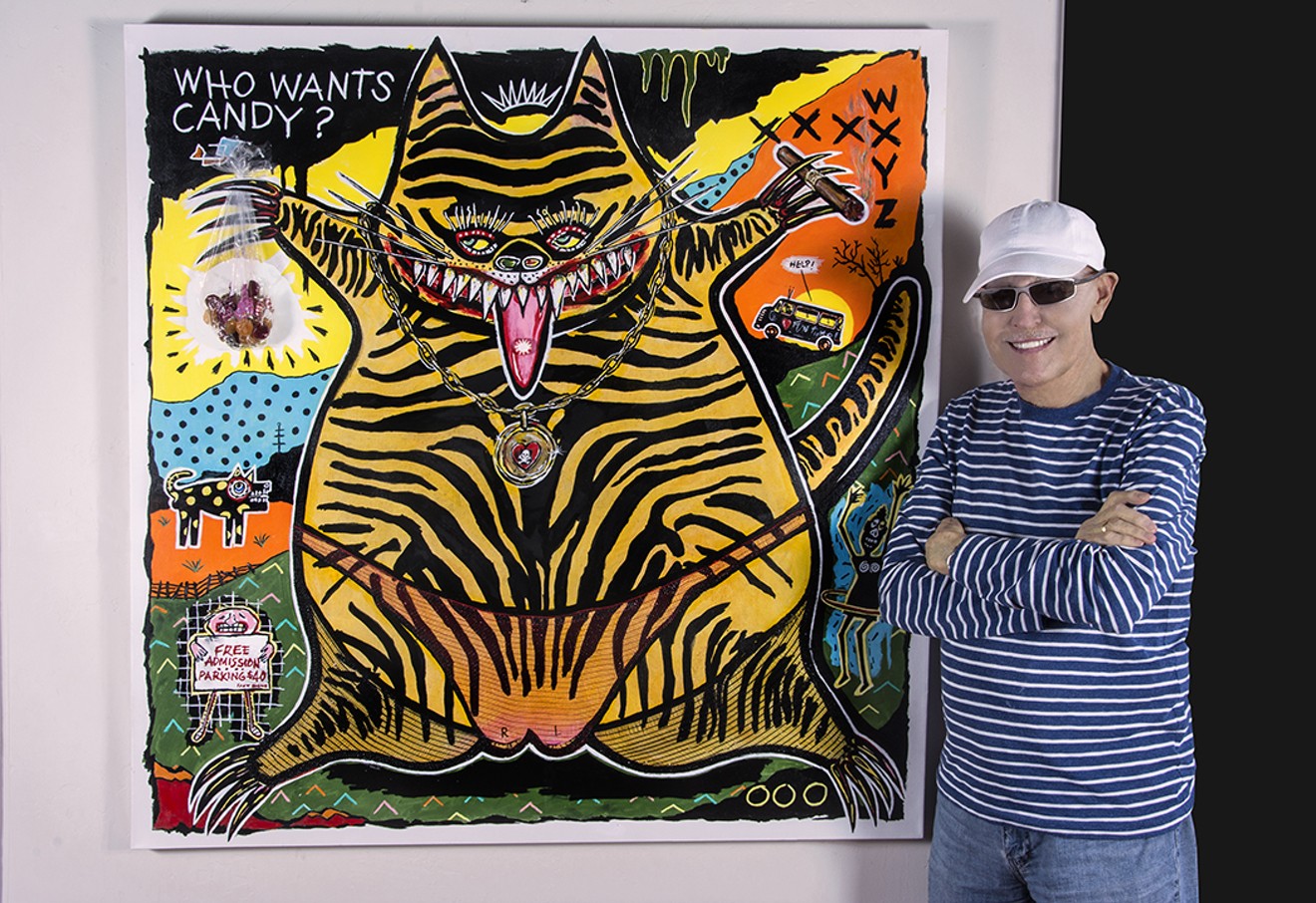 Fred Tieken and his painting "Purrrvert." Tieken Gallery
Fred Tieken, artist and musician, died on April 18, 2022, at the age of 86, surrounded by both human and furry loved ones. He is survived by his wife, Gail, five children, eight grandchildren, 19 great-grandchildren, and four great-great-grandkids. He had another daughter who passed away before his death.

Tieken had a chronic kidney condition, and in 2010, the doctors let him know the severity — a transplant was needed. Gail asked the doctors to test her to see if she could be the perfect donor and the test proved that she was a match. At the beginning of 2011, she entered the Mayo Clinic and gave her husband a kidney.

Fred did not let his condition set him back; instead, he used the surgery as a form of marching orders. Before the surgery, he started painting to keep an even keel and created Pass the Mayo, a multi-scenario piece with a hospital setting that offers funny takes on the situation, including the cafeteria running a special on kidney pie. He even had it brought to the hospital to entertain the staff.

He didn't look back once he broke that seal on the paint can. Over the last 12 years, Tieken has created hundreds of paintings that have appeared in more than 100 exhibitions here in Arizona and California. With a broad-meets-bold-stroke style that embraced the spirit of artists like Georg Baselitz and Jean-Michel Basquiat, Tieken infused his work with his unique subjects and humor. Lots of humor.

When that wasn’t enough, he did a couple of big things: opened the Tieken Gallery at his residence and a farther-west version in L.A.’s Chinatown, amid some art hotspots. Fred and Gail were just as passionate about showing others’ work and fostering relationships with other creatives. The force behind Scottsdale’s Royse Contemporary gallery, Nicole Royse, built a long-term personal and professional relationship with the Tiekens. “Fred Tieken was a true artistic force on so many levels here in Arizona, California, and Illinois,” Royse says. “His art was powerful, provocative, and witty, just like Fred. He expressed himself honestly and directly with his art, connecting with many patrons, young and old. His passion for art, music, and design was truly innovative, inspiring, and exciting.”

She recalls the couple’s commitment to building community. “Fred and Gail shared and supported people to help build a better art community here in the Valley. It has been my pleasure and honor to work with him and Gail on so many projects over these last 12 years. I am honored to call them dear friends, and I am truly saddened by his passing but will help to ensure his legacy will continue here in Arizona.”

David Allan Paul is a local artist who treasures his time with Tieken. “Fred’s life took many directions, each one bringing a great measure of success. He was generous in sharing the rewards of his efforts with the community and his friends, each of whom he appreciated and cherished. Always maintaining the best of outlooks and keeping a constant creative flow, Fred set a standard for living that many people work hard to emulate. My friendship with Fred will always be one of the most memorable and appreciated, as it no doubt will be for others. That inspiration is truly a gift that will always be with me.”

Fred got the bug to create when he was in high school. He grabbed a saxophone and led his own band, The Freddie Tieken Combo, while also becoming a mechanical draftsman. His band evolved to be Freddie Tieken and the Rockers, and they were a Midwestern rock 'n' roll act that toured and recorded several albums. Music is a theme that threads some of his paintings. And it gave him some fantastic stories to tell — like sharing a bill with a young comedian named Richard Pryor.

He got together with Gail in the early '70s, and the two have been a tight unit since. They managed bands and performers in Chicago, and Fred became a commercial artist. Graphic design became their business, and they brought those skills to Phoenix in the mid-'80s with Tieken Design.

John Borta is one of the couple’s oldest and dearest friends. “I've been extremely fortunate to know Fred and Gail Tieken for over 40 years,” he says. “I've seen Fred's artistic life evolve from musician to producer to graphic designer to fine artist. In all the time I've known him, one thing has remained true: He's always been Fred. There’s no one like him, and there never will be. He was an artist, a musician, and a passionate and supportive advocate for artists and musicians. I'm also grateful to say that he was my friend. I'm honored to have known him.”

Full disclosure, I also spent a great deal of time with the Tiekens. I've traveled to locations like Los Angeles and Miami to exhibit Fred’s work, and our friendship was born from this profound arts community in metro Phoenix. He had a tremendous and tireless spirit — often the life of the party after everyone else was falling asleep after 12-hour art shows and subsequent celebrations.

He didn’t want all the glorious happenings to end. However, when it was time for him to settle in and spend his last days with his people, he embraced it with the same fighting spirit, which is a type of bravery you don’t know until you do.

Fred Tieken left us with many rocking tunes and unique paintings full of emotions from love to amusement to anxiety to nostalgia. Those are pieces of his soul to enjoy forever.

Learn more about Fred Tieken and see his work at his site.
KEEP PHOENIX NEW TIMES FREE... Since we started Phoenix New Times, it has been defined as the free, independent voice of Phoenix, and we'd like to keep it that way. With local media under siege, it's more important than ever for us to rally support behind funding our local journalism. You can help by participating in our "I Support" program, allowing us to keep offering readers access to our incisive coverage of local news, food and culture with no paywalls.
Make a one-time donation today for as little as $1.