As part of his Gun Violence Awareness National Tour, the painting depicts a left hand doing a peace sign with the words “stop gun violence” right next to it. In comparison to some of Holbrook’s massive murals, the artwork is modest. But he says that’s the point.

“I wanted to make it more personal and make something that was — some image that was simple,” Holbrook recently told Phoenix New Times. “Sometimes simple is better and connects all the cities, connects the states. Connects the families in some way.”

Holbrook has spent much of his life inspiring people through art. As a child from a troubled Pennsylvania neighborhood, he was exposed to gang violence. He was a gang member himself and saw many of his close friends and family killed by firearms. He says today, in the world of social media, taking a photo in front of a mural can reach more people than just those walking by it. 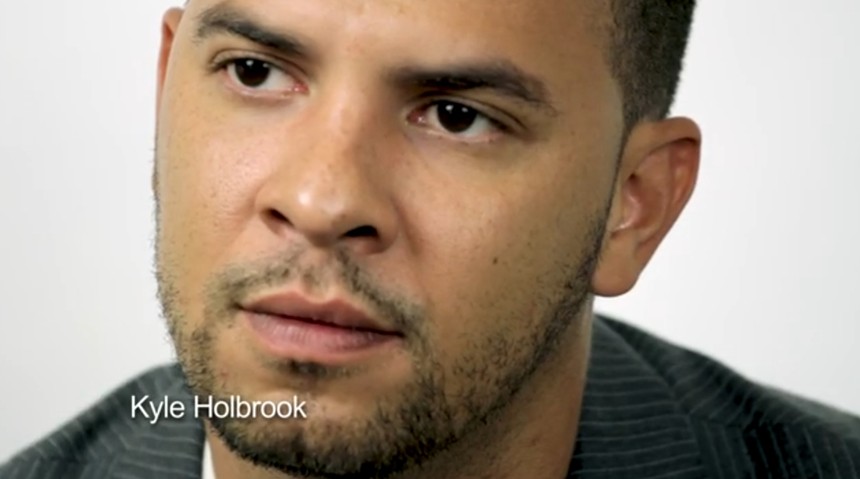 Muralist Kyle Holbrook wants to bring awareness to gun violence with his message of peace to all 50 states.
Courtesy of Kyle Holbrook

“Murals are cooler than ever because of Instagram and it's cool to get pictures with murals,” he says. “You know, it doesn't have to be 20 stories high and super elaborate to get the message across and to make it more Instagrammable if you will.”

Holbrook also points out that the victim isn’t just the person who was killed. Although most memorials celebrate the lives of departed individuals, there is another side, that of the living perpetrator and the families who are also grieving. “Many of them are sad and sorry that they did it," he says. "Sometimes someone was going to kill them — it’s complicated stuff.”

This journey also has proven to be more than Holbrook imagined. He has already visited 47 states, with Alaska and Hawaii still to come, but getting to those is a bit more challenging logistically. The project also has inspired communities to create their own programs, which leave him humbled.

“I'm a spiritual person, not religious, but I pray a lot, thinking about my friends and different stuff, of course, as I’ve been going on in this tour," he says. "[There is] a lot of good energy, a lot of things have been developing from it that I couldn’t have planned. And that’s exactly what I wanted. For instance, like some group in Savannah [Georgia] — some group of artists, now they want to do stop gun violence murals.” One of two antigun violence murals on Roosevelt Row painted by Kyle Holbrook.
Kyle Holbrook
The first gun violence mural Holbrook did was over two decades ago. It commemorated 27 of his friends, and honored his hometown of Wilkinsburg, Pennsylvania. His idea was to incorporate them as part of the narrative so they would never be forgotten. Today, his antigun violence street art has been seen across the country.

When it came to Arizona, how did he decide on Phoenix?

He says the interns at his “Moving the Lives of Kids Community Mural Project” (MLK) helped find the cities and what locations to put the peace signs. When it came to Phoenix, the decision was easy, as Holbrook points out: “Obviously, Roosevelt Row is one of the best artist districts in the world.”

The Roosevelt Row murals are black and white; other cities have different colors, but the image is always the same. He says consideration of color choices is talked about among the team, but ultimately, he wants to keep the murals simple. The simplicity in design is partly inspired by renowned street artist Banksy. Holbrook explains he wanted to “bring so much attention to stuff just from two colors and being simple. I don't use spray paint. So, it's done in that contemporary street art style; just two colors.”

Phoenix also got an extra mural, according to Holbrook. In true street art style, Holbrook saw an open spot and painted an extra peace sign. He figured the empty space would be best utilized with his message rather than blight. The extra antigun violence mural on Roosevelt Row painted by Kyle Holbrook includes another peace sign and a misspelled "Pheonix."
Kyle Holbrook
“When you do a mural, typically it's not messed with and so it's the only absolute deterrent,” he says. “But this was already somewhere where there was going to be another mural, so we all thought about that, and it was more about the message; the courage of my convictions or whatever. I’d rather do it to get the message out there more, and risk if there was repercussions. So that one — I didn't get permission for the second one.”

It's been 23 years since the Columbine High School shooting in Colorado, and gun violence has seen a huge increase over the past two decades. Nearly 29,000 people have already died due to firearms in 2022, according to the Gun Violence Archive. The total for all of 1999 was 10,828, about 37 percent of 2022's number thus far.

Holbrook says the epidemic may have started with his generation in the late '90s, or even before, “and now we're so inundated, they readily happen and it's certainly affected, not only our society but I think our psyche. And the younger generations, it's like the internet, you know? They think it was always there.”

Holbrook’s murals are in a small parking lot located at East Roosevelt Street near Second Street.
KEEP PHOENIX NEW TIMES FREE... Since we started Phoenix New Times, it has been defined as the free, independent voice of Phoenix, and we'd like to keep it that way. With local media under siege, it's more important than ever for us to rally support behind funding our local journalism. You can help by participating in our "I Support" program, allowing us to keep offering readers access to our incisive coverage of local news, food and culture with no paywalls.
Make a one-time donation today for as little as $1.
Timothy Rawles