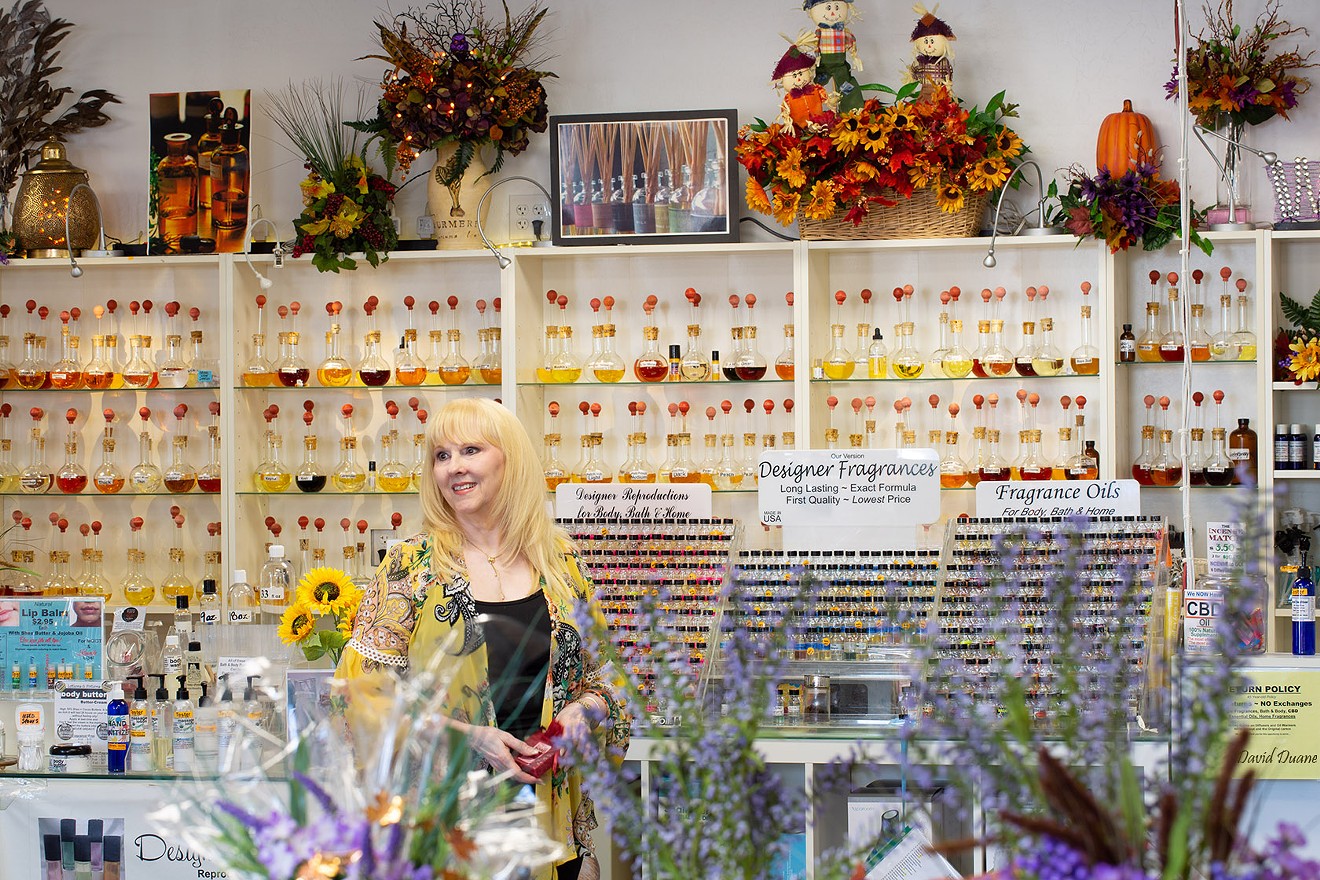 “Most people don’t understand them,” she said of the preservatives used in many cosmetics and commercial scents. “So it’s not easy to have a conversation about parabens. I can tell you that they’re carcinogens. They’re in a lot of stuff, and they’re kind of why I got into my business.”

Her business is Lotions and Potions, a nearly 50-year-old shop that peddles essential oils, wellness tinctures, and all-natural fragrances. “I was blessed with extra sensitive skin and the inability to use typical soaps and various other products,” she said. “Ever since I was a child. I had to be careful about what I put
on my body, and that kind of sparked my interest in skin chemistry.”


In 1972, she read about a chemist in California who created products for people with sensitive skin and cologne allergies. “I wrote to him and said, ‘How about I test some of your products?’” Muir said. She liked the chemist’s inventions so well, she decided to sell them. Muir dropped out of pre-med school and opened the first Lotions and Potions in a 215-square-foot spot at Metrocenter Mall the following year.

The shop was located in a section of the mall called The Alley, a cluster of hipster-themed kiosks next to Sears. “Our walls were stucco lathe, kind of like chicken wire. There was an old-time photo studio and a place that made leather belts. And us.”

Her first customers were young people emerging from late-'60s hippie culture. “We were in a deep recession, and these were people who thought money wasn’t important. So it was a lot of flower children coming in, and they really needed to talk. It was absolutely beautiful, a very, deeply spiritual experience. I stood there in that tiny space every day for three years, no time off, and just gave out love. No one had a dime to their name, but they’d bring me cookies and just bare their souls.”

“Another time we had Sally Field. Bob Dylan’s wife bought essential oils and Pat McMahon came in. Lots of regular people came in. It was a fascinating time.”

Business took off pretty quickly. “It was the '70s,” she explained. “People got into smelling good. Maybe it was all the patchouli and all the incense we’d been through. But pretty soon I had 20 stores in some very interesting places.”

Muir opened fragrance bars at SeaWorld parks in California and Florida; one at Busch Gardens, and several on the East Coast. “I had a showroom with a whole line of body care things at Mandalay Bay in Las Vegas. People would say to me, ‘Why do people want to buy fragrance at a casino or an aquatic park?’ All I can tell you is they did.”

Locally, Lotions and Potions turned up in Fiesta Mall, Camelview Plaza, and Christown Spectrum Mall. The chain thrived until shopping malls began to fall out of favor in the late '90s. Muir began closing stores then, shuttering shops and fragrance bars in Colorado, Oregon, and New Mexico.

“The mall rents became too high, and when this casino was buying that casino, they did away with fragrance bars.” A few years ago, she downsized further, closing the rest of her Phoenix stores and moving the flagship to North Seventh Avenue.

If the natural fragrance business has changed, so have Muir’s customers. More people are interested today in things like animal testing, she said.

“People used to just stare at me when I’d talk about parabens, or how I wanted the highest possible list of natural ingredients and no bunnies harmed. Now these ideas are kind of popular with just regular people.”

Muir keeps some novelty fragrances on hand, just for laughs: soda pop, popcorn, dirt. This attempt at humor backfired not long ago.

“One lady was in love with the scent of dirt,” Muir said. “She wanted everything we made for her to smell like dirt. Maybe she was a horticulturist. Or maybe she’d been a kid who liked to eat mud pies. I don’t know. Anyway, we made a whole line of body care for her: soap and lotion and body wash and sugar scrub. All scented like dirt. She couldn’t have been happier.”

The woman returned to Muir’s shop the next day, regretting her decision. “She said, ‘I love dirt, but I can’t walk around smelling like it.’ I gave her a full credit refund.”

Muir admitted she doesn’t spend a lot of time thinking about the old days.

“I try not to think about the history of my business,” she said. “Because it’s so extraordinarily long and deep that if I dwell on it, I become absolutely flabbergasted.”
KEEP PHOENIX NEW TIMES FREE... Since we started Phoenix New Times, it has been defined as the free, independent voice of Phoenix, and we'd like to keep it that way. With local media under siege, it's more important than ever for us to rally support behind funding our local journalism. You can help by participating in our "I Support" program, allowing us to keep offering readers access to our incisive coverage of local news, food and culture with no paywalls.
Make a one-time donation today for as little as $1.