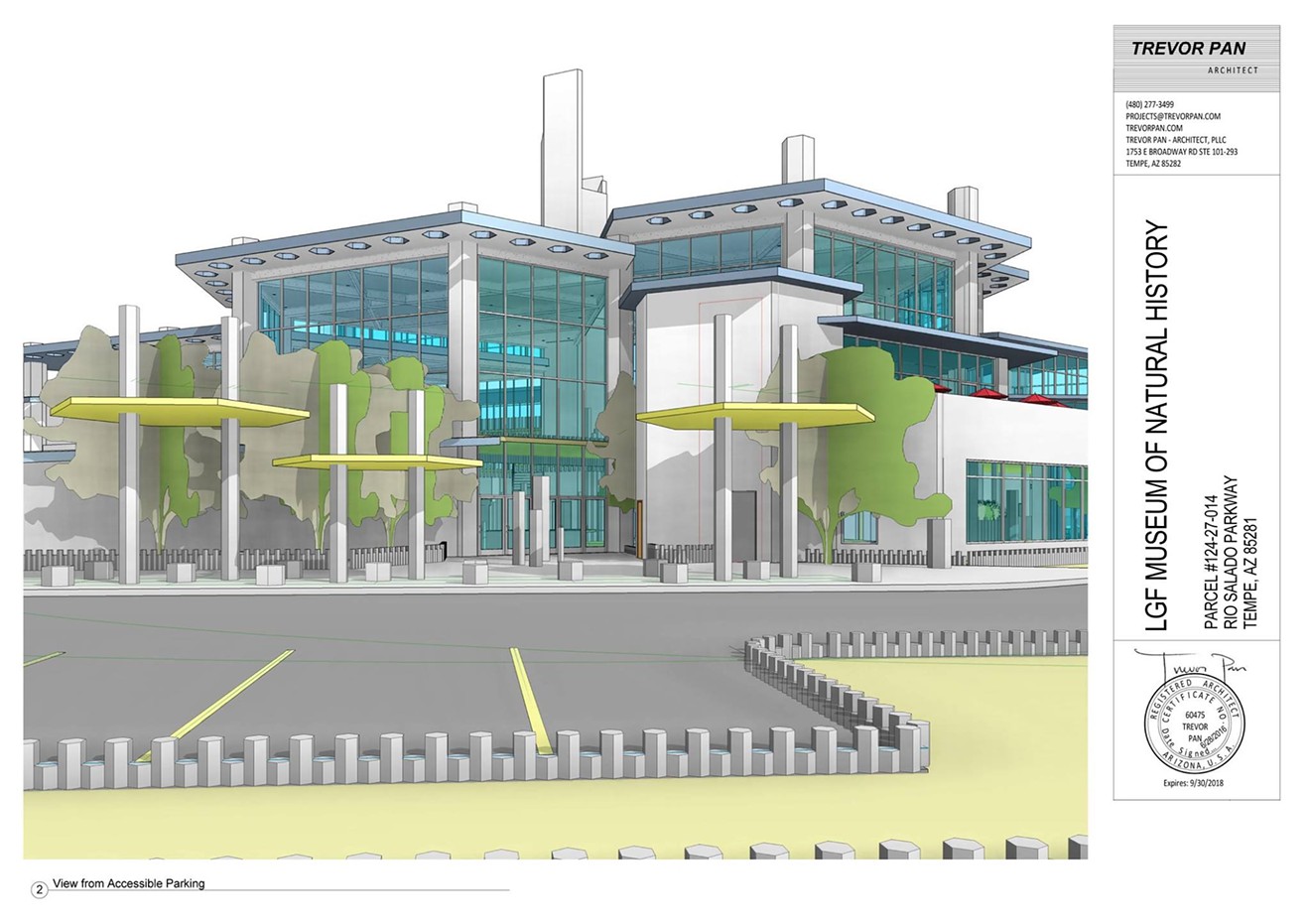 Architectural rendering for a proposed natural history museum. Trevor Pan/Courtesy of LGF Foundation
A new natural history museum could be coming to the Valley of the Sun. It’s the brainchild of Michael Fleeman, who heads the Tempe-based Northrop Development construction company he founded in 2009.

Several years ago, he founded the LGF Foundation. It's named for his father, Larry Gene Fleeman, an avid collector of natural history artifacts who died in 2009. Fleeman grew up exploring natural history with his dad, and plans to build a natural history museum in his honor.

It won’t be the first natural history museum in Arizona, but it would be the largest. The Arizona Museum of Natural History, founded in Mesa in 1977, has 80,000 square feet.

By contrast, Fleeman is planning a 300,000-square-foot museum that would cost about $200 million.

“We’re the only major city without a state-of-the-art natural history museum,” Fleeman says.

And he wants to change that for a couple of reasons.

“I want to help make Phoenix an internationally renowned destination,” Fleeman says. But he also wants to fuel the region’s economic growth, and inspire new generations to love math and science. 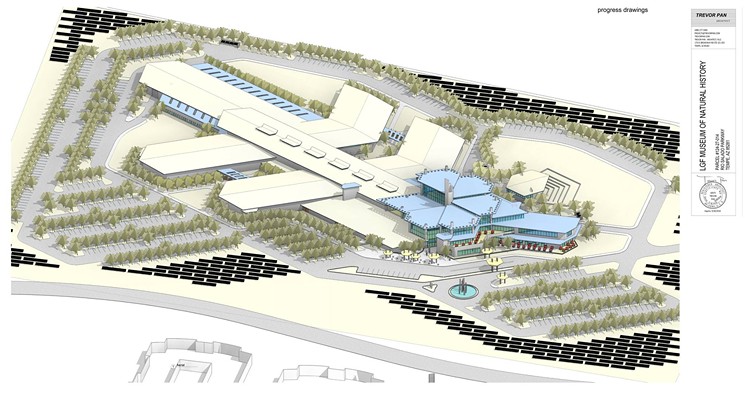 Front elevation of a proposed natural history museum.
Trevor Pan/Courtesy of LGF Foundation
This isn’t the first time in recent memory that a new museum has taken shape in metro Phoenix. Western Spirit: Scottsdale’s Museum of the West opened in 2015, and the Musical Instrument Museum opened in 2010. In 2008, the Children’s Museum of Phoenix moved into the renovated historic Monroe School in downtown Phoenix.

Fleeman has identified several possible sites for the museum, including 15 or 20 acres in the Discovery Triangle that’s already home to Desert Botanical Garden and the Phoenix Zoo.

He says he's already in discussions with the city where his first choice is located, but isn’t ready to make that public yet. It’s possible, Fleeman says, that they’ll nail down a site and go public with it within a couple of weeks.

In the meantime, he’s been doing some serious legwork.

Fleeman commissioned Tempe architect Trevor Pan to create an architectural design for the museum, and had Tempe-based Elliott D. Pollack & Company to do an economic impact study. The renderings list Pan's address, but that's not an indication of where the museum, which has yet to be named, will be based.

Museum plans also call for two interactive exhibits, a mine ride, and a digging pit, plus several other amenities: a conference hall, two theaters, a library, specimen labs, eateries, and fountain.

The museum will feature objects and artifacts from around Arizona, the United States, and the rest of the world, Fleeman says. He’s already acquired items from diverse places such as Brazil, Italy, China, and Madagascar, to name a few.

Interior design for proposed natural history museum.
Trevor Pan/Courtesy of LGF Foundation
To date, Fleeman has collected more than 10,000 specimens he values at more than $10 million. For now, he’s storing them at both his home and an office space he’s rented in North Scottsdale.

Some dinosaur skulls sit loose on display shelves, while others are so valuable that they’re hidden away in a vault. One display case holds a small piece of Mars the size of a camera memory chip, and another a raw emerald the size of a football. One room holds a purple geode that goes up to Fleeman's armpit. You get the idea.

Fleeman plans to raise the money through several sources, including individual and corporate donations, grants, and naming rights.

“I want the museum to be a place that everybody can be proud of, from mom and pops to Ph.Ds,” Fleeman says. “And I want Arizona to be a leader in the museum industry.”