Throwback to a previous Mayor's Arts Awards ceremony at Hance Park. Phoenix Center for the Arts
click to enlarge Throwback to a previous Mayor's Arts Awards ceremony at Hance Park.
Phoenix Center for the Arts
From tragic news to cause for celebration, here's what you need to know about the creative scene in Phoenix.

Nominations are now being accepted for the 2021 Mayor’s Arts Awards, which will recognize a community arts innovator as well as an outstanding artist in each of the following categories: literary, multidisciplinary, performing, visual, and youth. Artists can self-nominate, and community members can apply to serve on judging panels that will also include previous award winners. Nominations and applications are due by October 4. The awards ceremony will take place at Hance Park on November 18.

The Lost Leaf in Roosevelt Row recently posted a notice on Facebook about a painting by artist Zach Willett being stolen from the bar and creative space, where it had been hanging on a wall. The Lost Leaf is asking that anyone with information contact either the venue or the artist (via @pillowfortmedia), or return the artwork “no questions asked.”

The Phoenix Fridas artist collective is mourning the deaths this year of two of its members, Luisa Leon Ruiz and Monique Sanderson-Mata, whose many contributions to the arts community included working with youth and coordinating opportunities for fellow artists to show their works. Founded in 2004, the collective takes inspiration from renowned 20th century artist Frida Kahlo.

Tempe Center for the Arts reopened on September 7.
Lynn Trimble

Tempe Center for the Arts reopened on September 7. The center is home to an art gallery, two theaters, and other creative spaces. New programming planned for this season includes an emerging artists series called 48 Live, a creative wellness series called S.H.A.P.E., and an Indigenous Arts Arizona Festival curated by Violet Duncan. Proof of full vaccination against COVID-19 is required for admission to ticketed events, and the venue requires masks for all visitors ages 2 and up.

Arizona Citizens for the Arts, an advocacy organization that promotes arts-friendly public policy at the state and local level, plans to launch a formal search for a new executive director. Joseph Benesh, who served as executive director for two years, is transitioning to a new role with the group this month.

Scottsdale Center for the Performing Arts has changed its COVID-19 protocols.
Lynn Trimble

Scottsdale Center for the Performing Arts is instituting a change to its COVID-19 precautions. The center is requiring all staff to be vaccinated by September 30. Beginning on October 1, all patrons will have to show proof of a negative COVID-19 test within 72-hours of attending an event or performance — or provide proof of full vaccination. Masks are strongly recommended at Scottsdale Center for the Performing Arts as well as Scottsdale Museum of Contemporary Art, where visitors need timed-entry tickets.

Arizona Commission on the Arts

Arizona Commission on the Arts, which is one of over 50 state and jurisdictional art agencies across the United States, will come up for reauthorization in 2022. Founded more than 50 years ago following the creation of the National Endowment for the Arts, the agency administers funds from the State of Arizona and the NEA, which help to support the arts sector and increase arts access and participation across Arizona.

When the Japan Art Association announced its Praemium Imperiale Laureates on September 14, awardees included two individuals based in the U.S. — artist James Turrell and musician Yo-Yo Ma. Turrell lives in Northern Arizona, where he is continuing work on Roden Crater, a monumental work of land art created using an extinct volcano. The awards recognize artists “for their achievements, for the impact they have had internationally on the arts, and for their role in enriching the global community.” 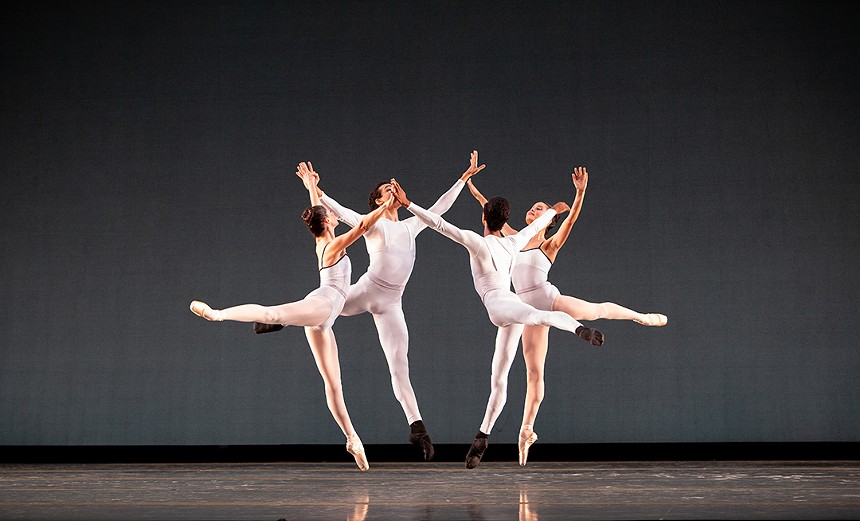 Ballet Arizona will perform "In Creases" during Contemporary Moves in November.
Alexander Iziliaev

Two development teams interested in transforming Danelle Plaza, a strip mall and creative hub located at Southern and Mill in Tempe, have released proposals for transforming the plaza into a mixed-use space with housing. The release follows the city’s decision earlier this year to cancel a Request for Qualifications issued for the site, where Tempe owns a portion of the land. Whether a mixed-use project moves forward will depend in part on actions the city takes moving forward. 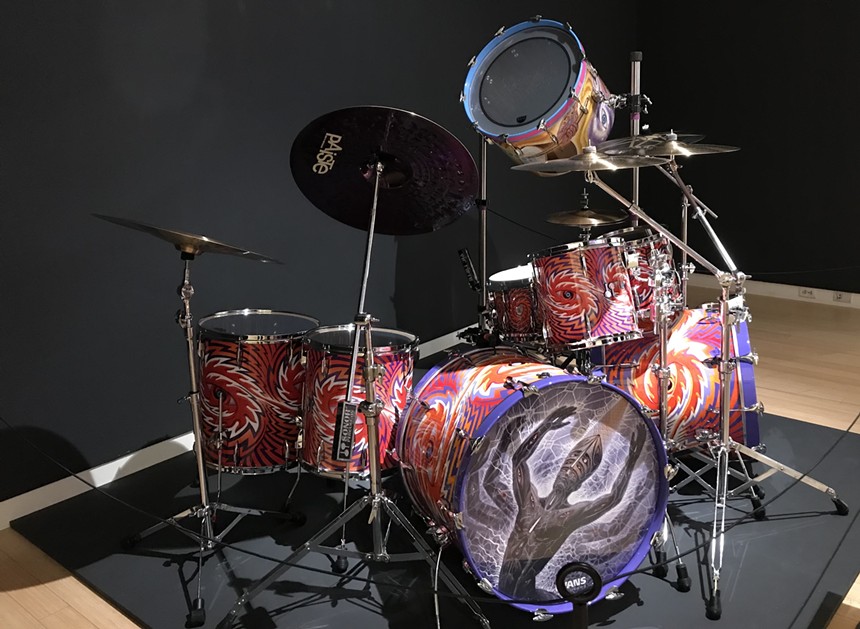 Lois Roma-Deeley began her term as the new poet laureate for the city of Scottsdale on August 6. Her term runs through December 24, 2024. The inaugural poet laureate, Bob Frost, served from 2010 to 2021. The appointment comes with an annual $1,500 honorarium. As poet laureate, Roma-Deeley will be charged with enhancing “the profile of poetry, poets and literary arts to the entire community through workshops, performances and advocacy.”

Derek Fordjour will be the keynote speaker for the Lernhardt Lecture at Phoenix Art Museum on October 27. The artist is best known for large-scale works that “examine the power, performance, and vulnerabilities inherent in the Black experience, particularly through the lens of success and achievement.” The museum recently acquired his 2020 The Futility of Achievement through its Lernhardt Contemporary Art initiative. The lecture will occur in-person and virtually, and free tickets are available on the museum website.

Zachary Justin is one of many artists who has created work in Roosevelt Row.
Lynn Trimble

The Roosevelt Row Community Development Corporation is getting ready to announce the results of a recent survey designed to help “define the future of the Roosevelt Row Arts District.” Results of the survey, which was completed by 1081 people, will be unveiled during a fall equinox fundraiser on Tuesday, September 21. About 20 percent of the respondents identified themselves as artists. The survey yielded several suggestions for improving the area, including affordable housing, more parks/green spaces, and increased safety.

The Five15 Arts collective is accepting applications for artists working in a variety of mediums and styles who are interested in joining the group for a period that runs from February 2022 to June 2023. The contract includes a solo show at Chartreuse gallery, and participation in five group exhibits at the Grand Avenue art space. Members pay $75 monthly dues and assume other responsibilities to help run the collective. New members need to be fully vaccinated by the start of their term. Applications are due by November 30.

Julie Akerly, who co-founded the Phoenix-based artist incubator [nueBOX] with Matthew Mosher in 2014, has moved from Phoenix to Washington, D.C. The choreographer, dancer, and arts administrator previously served as a community arts specialist for the City of Tempe. Akerly relocated to accept a position doing dance programming for the John F. Kennedy Center for the Performing Arts. 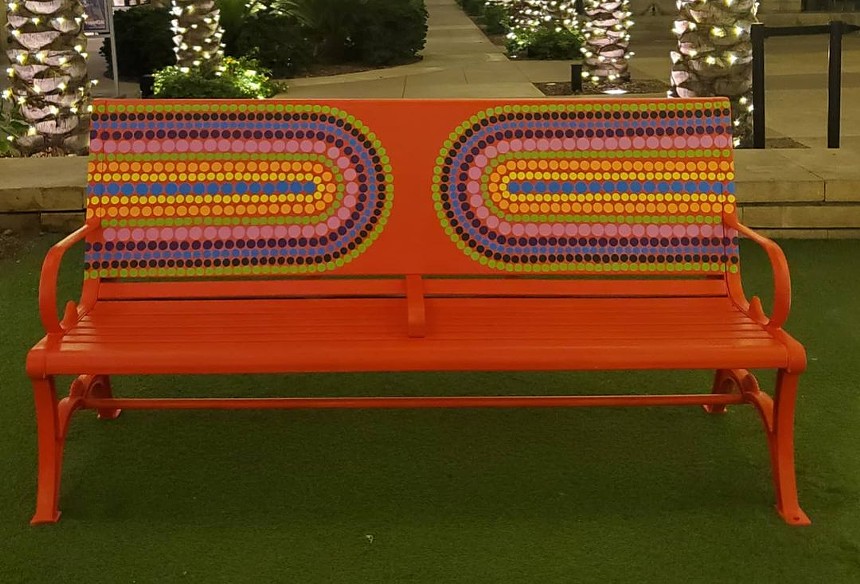 Several artists are painting benches at Scottsdale Quarter. Kyllan Maney’s bench featuring her iconic symmetrical designs is already on view. The outdoor shopping center has also featured mural-style artworks by several local artists in recent years, as well as live-painting events that give shoppers the chance to see artists at work.

Gallery 100 relocated to Mirabella at ASU, which is located at University Drive and Mill Avenue in Tempe. It’s one of several ASU galleries and exhibition spaces that are open to the public. Others include Harry Wood Gallery inside the School of Art building on the Tempe campus, and Step Gallery and Northlight Gallery at Grant Street Studios.

The Virginia G. Piper Charitable Trust recently awarded grants to 71 nonprofits in several key sectors, including arts and culture. Twenty-two arts and culture organizations received a total of just over $32 million in unrestricted funding. Ten of those groups received grants of at least $1 million.

Landmark Theatres will open an eight-screen movie theater at Scottsdale Quarter this fall, in the former IPIC Theatres space located at 15257 North Scottsdale Road, #230. The theater chain specializes in mainstream films and independent cinema. The specific opening date has not been announced.
KEEP PHOENIX NEW TIMES FREE... Since we started Phoenix New Times, it has been defined as the free, independent voice of Phoenix, and we'd like to keep it that way. With local media under siege, it's more important than ever for us to rally support behind funding our local journalism. You can help by participating in our "I Support" program, allowing us to keep offering readers access to our incisive coverage of local news, food and culture with no paywalls.
Make a one-time donation today for as little as $1.