Contemporary Forum is one of several Phoenix Art Museum support organizations. Founded in 1982, it has been providing grants to Arizona artists since 1986. 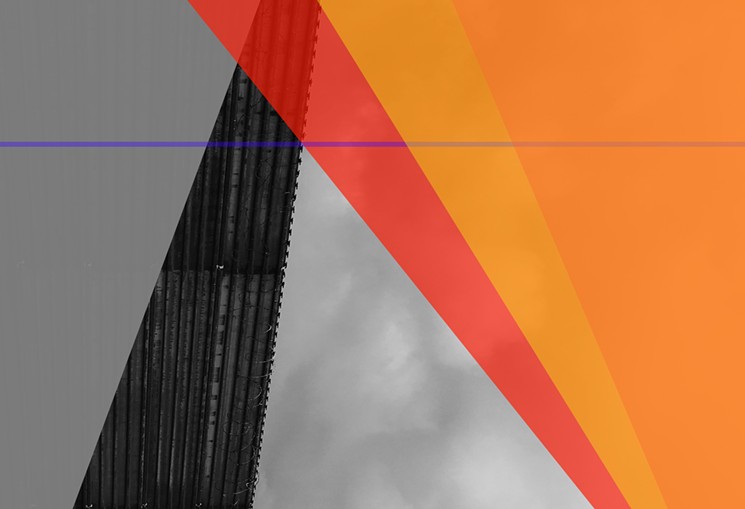 Detail of a permanent pigment print on paper composition from the Day Dreaming series.
Julio César Morales
Morales works in various media, often addressing personal and societal aspects of migration. He's represented by Gallery Wendi Norris in San Francisco, and has been curator for ASU Art Museum since 2012.

Sometimes Morales makes photo collages, coupling images of the desert landscape or border wall with geometric shapes in colors that reference desert flowers or items such as shoes or water bottles discarded by migrants. Other times, he paints simple text taken from news headlines such as "Nuns Caught With Cocaine in Habits."

His work has been exhibited nationally and internationally, and is part of several museum collections, including the Museum of Modern Art in New York, and the Los Angeles County Museum of Art. It has been shown in metro Phoenix venues as well, including Fine Art Complex 1101 and Palabra.

Most recently, watercolor on paper works from Morales' Undocumented Interventions series were featured in the "Walk In My Shoes" exhibit at The Gallery at Tempe Center for the Arts. The series shows some of the ways people smuggle themselves across the U.S.-Mexico border, revealing both their desperation and their ingenuity. The award recognizes artists whose work “has demonstrated a sustained degree of excellence” and who have “demonstrated significant growth in their work over their career.” Morales was chosen by a panel of five judges.

"It was extremely competitive this year," says Vicario.

In part, that's because of changes to the Scult Award nomination process, he says. The judges reached out to curators and arts professionals in Flagstaff, Phoenix, Prescott, Tempe, and Tucson. They asked each to nominate two artists.

Morales is in good company.

Currently, Phoenix Art Museum is exhibiting works by Matt Magee and four additional artists honored by Contemporary Forum in 2017. Magee gave an artist talk about his work at the May 23 Contemporary Forum event. Next year, it will be Morales' turn.

Four additional artists were honored on May 23, including Taylor James, Shanice Malakai Johnson, Elliott Jamal Robbins, and Papay Solomon. Each will receive a $2,000 Contemporary Forum Artist Grant, and all will be part of a group exhibition at Phoenix Art Museum in 2019.

The "Contemporary Forum Artists’ Grants Winners and Arlene and Morton Scult Artist Award Exhibition" continues through Sunday, November 4, at Phoenix Art Museum. Learn more on the Phoenix Art Museum website.
KEEP PHOENIX NEW TIMES FREE... Since we started Phoenix New Times, it has been defined as the free, independent voice of Phoenix, and we'd like to keep it that way. With local media under siege, it's more important than ever for us to rally support behind funding our local journalism. You can help by participating in our "I Support" program, allowing us to keep offering readers access to our incisive coverage of local news, food and culture with no paywalls.
Make a one-time donation today for as little as $1.