Explore Safwat Saleem’s take on America’s political landscape at Vision Gallery in Chandler. Peter Bugg
Looking to fill your week? Check out the local talent at the Hip-Hop In The Valley showcase, see everyone's favorite musical Hamilton, or take a bite out of Tacolandia. For more things to do, visit Phoenix New Times' calendar.

“Concerned but Powerless”
Early in 2016, Pakistani-American Safwat Saleem turned to art as a way to process the upcoming presidential election. The Phoenix-based artist launched a series of new work that he expected to finish on Election Day. But that didn’t happen, because of his reaction to the election results and events that followed.

Now, he’s showing those works in his first solo exhibition in seven years. The free art show is called “Concerned but Powerless,” and you can give it a good look during the opening reception from 6 to 8 p.m. on Thursday, January 25.

It’s a chance to meet the artist, and learn more about what the gallery calls his “satirical response to the national political and cultural climate.” Seems like he must have had plenty to work with. The show runs through Friday, March 2, at Vision Gallery, 10 East Chicago Street in Chandler. Visit the Vision Gallery website. Lynn Trimble

Adam Sandler
The L.A. Times once referred to Adam Sandler as “the white Tyler Perry.” Clearly a jab at the SNL alum’s proclivity for unpretentious comedy, the revered publication failed to take in to account Sandler’s impressive dramatic acting chops.

Consider the subtle eccentricities Sandler so adroitly embodied in Barry Egan, the protagonist from 2002 indie hit Punch-Drunk Love, for instance. Sandler has certainly made his millions on cheap laughs and shallow plot lines, but one gets the sense that the Brooklyn native isn’t too concerned about the critical implications of flops like Jack and Jill. He’s just having a good time; and usually that sells. 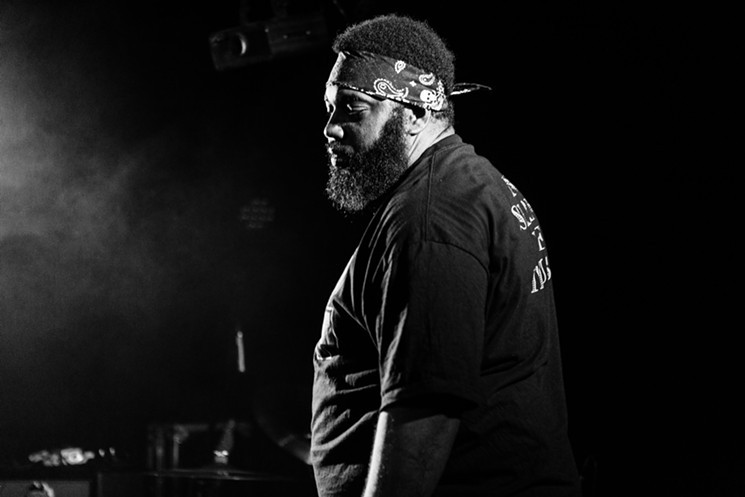 Local rap is the best rap.
Courtesy of Teek Hall
Hip-Hop In The Valley
The monthly showcase Hip-Hop In The Valley returns with a cypher followed by Guy Optimal Goodwin, FATED, Black One, and abstract niños performing live sets inspired by Dr. Martin Luther King Jr. Event organizer DJ Scapegoat will spin to close out the night. He hopes the showcase will share the message of his civil rights hero.
“I’ve always looked up to Dr. King as an inspiration to live for others, and with this ‘leader’ we have now, obviously our country has lost focus on what a leader needs to be,” Scapegoat says. 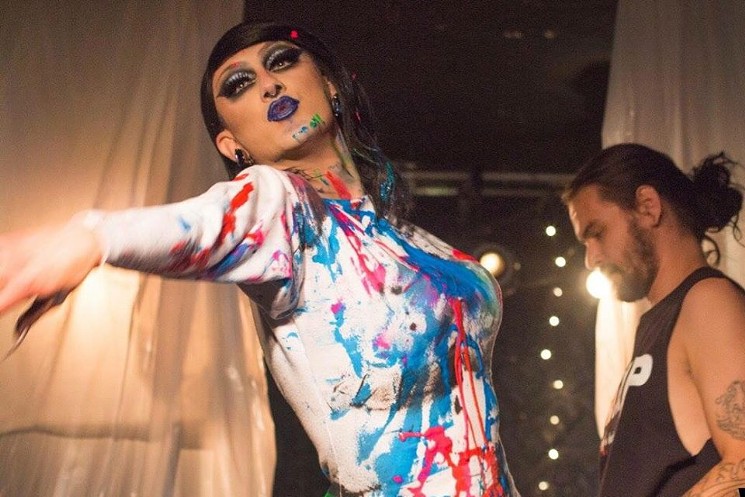 Co-producers Jenna DuMay and Gabe Swing.
Stephanie Zahra
Vamp: The Spooky Bitches Tour
Vamp: The Spooky Bitches Tour is about to roll into Scottsdale for a night and shake things up. This raucous Tucson drag show is on tour and bringing along some drag stars from Los Angeles — including Ursula Major, Frankie Doom, and Xochi Mochi — to make the show a divinely decadent evening. Brii St. James, Astrud Aurelia, and Rubye Moore are a few of the Arizona ladies performing.

Hosted by Jenna DuMay and Natalia Flores, the group promises a night of blood and a whole lot of monster drag. Oh, and milkshakes, too, but not the kind you drink. Get spooked at 9 p.m. on Thursday, January 25, at BS West, 7125 East Fifth Avenue in Scottsdale. Tickets are $5; VIP meet-and-greet passes are $15. Call 480-945-9028 or visit the BS West website. Amy Young

See fresh dance works by emerging artists during ASU’s “Transition Projects: Fit to be Tied.”
Carlos Velarde
Transition Projects: Fit to be Tied
There’s nothing wrong with rooting for your faves on Dancing With the Stars or So You Think You Can Dance. But it’s tough to beat the thrill of watching live dance performance, uninterrupted by mind-numbing commercials or commentary from preening judges.

Give it a try at 7:30 p.m. on Friday, January 26, when the Arizona State University Herberger Institute for Design and the Arts presents an evening of dance performances by 2018 bachelor of fine arts candidates.

Transition Projects: Fit to be Tied, will feature an eclectic mix of original choreography, sound, and set design at the Margaret Gisolo Dance Studio Theatre, inside the P.E. East Building, 611 East Orange Street in Tempe. Tickets are $16 for adults, and you can get them online or at the event. Visit the ASU event page. Lynn Trimble

Not just a regular film freakout.
Melissa Fossum
A Very Special Freakout
Drugs. Drunk driving. Teen pregnancy. These topics often mean an awkward discussion between parents and teens. But over the last four decades, After School Specials, Lifetime Original Movies, and the Hallmark Channel whipped up a solution with original dramatic productions. These kitschy stories were broadcast to adolescents looking for answers.

Not one to let such content go to waste, the Unfathomable Film Freakout has compiled campy clips for A Very Special Freakout, which includes segments of gang members sporting eye patches, addicts leaping out of windows, and tough but misunderstood student athletes. All were too tacky or cheesy to be taken seriously.
Parental discretion is advised at 10 p.m. on Friday, January 26 at FilmBar, 815 North Second Street. Admission is $7. For more information, visit the Film Bar website. Jason Keil

Led by Robert P. George and Cornel West, prominent thinkers with opposing views, the event aims to create an environment in which students can openly challenge each other and share opposing viewpoints.

Get ready to talk it out at 5 p.m. on Friday, January 26, at the ASU Student Pavilion, 400 East Orange Street in Tempe. Tickets are free are and available through EventBrite. For more information, visit the Facebook event page. Lindsay Roberts

Arizona State University v. Boston University
There’s been a lot of recent commotion surrounding Arizona State University’s Sun Devil athletics: Bobby Hurley and the seemingly meteoric rise of the men’s hoops squad; the dismissal of Todd Graham; and the highly publicized hiring of his replacement, Herm Edwards. Which makes it easy to forget that the Devils actually compete in sports outside of football and basketball.

Attentive collegiate sports fans, however, have likely kept a close eye on the ASU men’s hockey team. One of the university’s more intriguing athletic offerings, the Devils had flirted with national dominance while part of the American Collegiate Hockey Association, but have floundered since entering Division 1 play in 2015.

Fans at the 2017 Pot of Gold Festival.
Jim Louvau
Pot of Gold Local Band Showcase
The Pot of Gold Festival is coming to Rawhide Event Center in Chandler, with Sturgill Simpson and Phil Lesh taking the stage on the second day of what looks to be the jam band event of the year. Arizona-based bands are getting in on the action as well. The Pot of Gold Local Band Showcase is a preview of the festival’s local lineup, which includes Mind Upside, Christopher Shayne, DL Marble, Chad Rubin, Mills End, Sugarwater, and Mr. Mudd and Mr. Gold. According to Donny Johnson, general manager of Lucky Man Concerts, the evening’s ticket sales and attendance at the showcase will determine when each band will perform at the festival.

The conference will feature five YA and middle-grade authors, including local favorites Bill Konigsberg, Stephanie Elliott, and Tom Leveen, joined by out-of town authors including up-and-coming horror writer Amy Lukavics. The guests will share secrets for crafting great novels for the under-20 crowd (as well as navigating the crowded publishing field) in three sessions. Following the workshops, there will be a panel on YA literature and an autograph session.

The event starts at 9 a.m., with the panel starting at 2 p.m. Admission to the workshops is $60 per person, or $70 including lunch at the First Draft Book Bar. The panel and autograph session are free. Call 602-274-0067 or visit the Changing Hands website for more information. Michael Senft