An autobiographical masterpiece, a 25th anniversary reissue, and an understated Swedish troll drama are among the metro Phoenix movie openings for Friday, December 7. Openings were accurate at the time of publication and are subject to change. For showtimes and more film and television coverage, check out the Phoenix New Times film page.

Lorenzo Ferro plays Carlos, the criminal protagonist of Luis Ortega’s El Angel, an Argentine ripped-from-history crime drama that follows a young man turned on mostly by desires he can’t quite articulate.
Courtesy of The Orchard
The Angel (El Angel) — The most striking moment in Luis Ortega's El Angel comes early, during what most movies would make into a tense clockwork heist. "I look like my mom when she was young," declares Carlos (Lorenzo Ferro), the criminal protagonist of Ortega's vivid, upsetting Argentine ripped-from-history crime drama. The young man states this while regarding himself in a mirror — wearing a pair of dazzling earrings — in a Buenos Aires jewelry shop he's broken into in 1971. His mom, you'll likely conclude, must have been a true beauty: Teen Carlos may be a thief and a killer, but he has the face and curls of a Botticelli cherub, his pouty eyes and plump lips and touched with sublimity. Criminal partner Ramon (Chino Darin), who often sputters out performative homophobic slurs, is briefly as struck as Carlos — or viewers. Slowly, teasingly, like a lover revealing himself, he pulls out his gun, staring into the mirror with Carlos. Carlos does the same. El Angel is a crime spree as improvised reverie, one whose subject is as quick to give away his loot as the director is to make the subtext explicit. It's not the rise and fall narrative we so often get in films about famous crooks; Carlos Robledo Puch, instead, merely dicks around — stealing, occasionally killing — 'till he's caught for good. Ortega and Ferro portray this gorgeous sociopath as utterly disaffected, a young man turned on mostly by desires he can't quite articulate, even to other criminals. He steals and even kills not out of a lust for material goods but out of something more like a turned-on boredom. Not Rated. (Alan Scherstuhl) 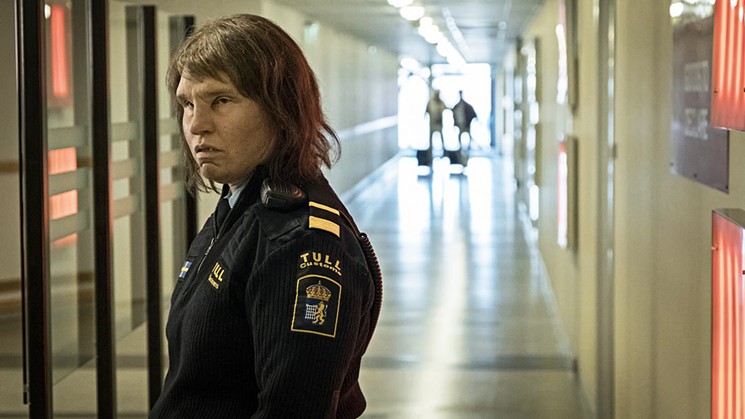 Eva Melander plays Tina, a quiet, somber Swedish customs guard working a border crossing in Ali Abbasi’s Border.
Christian Geisnas
Border (Gräns) — Ali Abbasi's understated troll drama Border looks at first like it's going to be a ... wait, sorry, let's hold up. Can we reflect on the fact that critics can now write the words "understated troll drama" without so much as batting an eye? We've had sensitive zombie romances, gentle cannibal dramas, moody vampire coming-of-age pictures. Once upon a time, an unassuming, intimate story exploring the inner life of a mythical, cave-dwelling creature from Scandinavian folklore might have seemed genuinely innovative. To its credit, Border keeps the fantastical stuff to a minimum at first. All we know of our protagonist Tina (a very good Eva Melander) at first is that she is a quiet, somber Swedish customs guard working a border crossing and also, as it happens, has rough skin, heavy brow and wide-set eyes. She can literally smell fear, anger, or shame. In the woods outside her home, she communes with animals, cavorting with deer and a moose. Nobody says "troll" at first, and the film initially keeps us in a gray area as to how exactly its world works. Things gain some clarity when Vore (Eero Milonoff) walks through customs. He's got Tina's features, but he's also confident and cool. He tells her she's not alone: There are more trolls out there like them, in scattered little communities. Charismatic, and even a little cruel, Vore captivates Tina, and allows her to explore her true nature — or what he tells her is her true nature. While the film does take some twists and turns — some fairly contrived — it mostly drills down and explores her emotional conundrum without drawing symbolic conclusions about the world we live in. Rated R. (Bilge Ebiri)

Yalitza Aparicio plays Cleo, the caretaker of a privileged family in the early ’70s who also becomes the soul sister and friend to matron of the home Sofia in Alfonso Cuarón’s autobiographical film Roma.
Alfonso Cuarón/Courtesy of Netflix
Roma (critic's pick) — Roma, Alfonso Cuarón's most personal film to date, is being (rightfully) hailed as a masterpiece. It's a portrait of the soul of a culture carried, birthed, nursed, and loved by women, and it is perfection. The writer-director shot in chronological order, without showing the cast the script, unveiling it to the actors the same way it is for the audience, piece by piece, a chance to marinate in each moment as it plays out. The story is that of a privileged family in the early '70s, living in Roma, a borough just west of Ciudad Mexico. Its heart is the family's caretaker, Cleo (the transcendent Yalitza Aparicio in her very first acting role). Cleo is the surrogate mother to the children she cares for, the soul sister and friend to matron of the home Sofia (Marina de Tavira), and also the employee who shares a tiny room floors above the garage with her own best friend, the household's cook, Adela (Nancy García). Cleo and Adela giggle and gossip in Mixteca, their indigenous language, over her boss' sometimes nitpicky requests. Cuarón has called the film, which spans one year in a changing country and evolving family, an homage to the women who raised him. As Cleo faces surprise pregnancy, and both she and Sofia find themselves deserted by the men in their lives, Cuarón crafts a vision of Mexican womanhood while also peppering in contrasting reflections between poverty and privilege. Roma explores the delicate nature of a woman's autonomy over her feelings, and how she changes through love and loss. Serving as his own cinematographer, Cuarón manifests life and humanity in its purest forms in gorgeously intricate, effusive frames. Rated R. (Yolanda Machado) 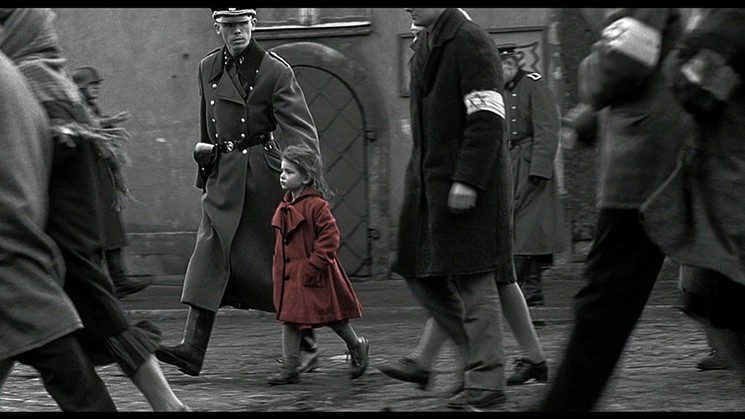 The fate of the little girl in the red coat, played by Oliwia Dabrowska, was one of the gripping storylines in Schindler's List, Steven Spielberg’s 1993 Holocaust epic that is returning to the big screen in honor of the 25th anniversary of its release.
Courtesy of Universal Pictures
Schindler's List 25th Anniversary (critic's pick) — Upon its release, at a mall a 25-minute drive from my high school, I found seeing Steven Spielberg's much-garlanded and much-criticized 1993 Holocaust epic Schindler's List two parts wrenching to one part corny. The film was touched by its director's genius for capturing complex process and chaos onscreen, but it also was one mangled by clumsiness and naiveté. Surely, the final speeches given by Liam Neeson, playing the German munitions manufacturer Oskar Schindler, should have been cut! But unlike several brilliant film critics who I was reading at the time, and whose arguments I found stimulating, I never doubted that Spielberg had crafted a work of towering significance. Adults I knew in small-town Kansas were never going to read Elie Wiesel or watch Claude Lanzmann's Shoah. But they damn sure saw Schindler's List. Spielberg accomplished nothing less than forcing the world to bear witness to the worst of what humanity is capable. By focusing his camera so often on that terrible process, on the step-by-step logic of systemic brutality and murder, Spielberg constructed the imaginative framework through which the unthinkable — 6 million dead! — becomes concrete. Revisiting the film, the moments I found false in '93 now moved me to tears. One knock against the movie has always been that Spielberg, that sentimental man-child, somehow found the one Holocaust story with a happy ending — and one with a hero who is a Gentile. But today what moves me is Schindler's outsiderness. Schindler understands the simple truth that to ignore injustice is to sanction it, a conviction that maybe seemed simple-minded in '93, when fascism was on the ropes. Today, it's radical. Rated R. (Scherstuhl)

Ella Hunt gets into the holiday spirit in Anna and the Apocalypse.
Gerardo Jaconelli/Orion Pictures
Other openings — Anna and the Apocalypse, a Christmas-themed Scottish zombie musical; In Search of Greatness, a documentary about athletic excellence; Indian Horse, a drama about a Canadian First Nations boy who grows up to be a hockey star; Swimming With Men, a British comedy about a middle-aged man who joins a swim team; and Three Words to Forever, a Filipino family drama.
KEEP PHOENIX NEW TIMES FREE... Since we started Phoenix New Times, it has been defined as the free, independent voice of Phoenix, and we'd like to keep it that way. With local media under siege, it's more important than ever for us to rally support behind funding our local journalism. You can help by participating in our "I Support" program, allowing us to keep offering readers access to our incisive coverage of local news, food and culture with no paywalls.
Make a one-time donation today for as little as $1.