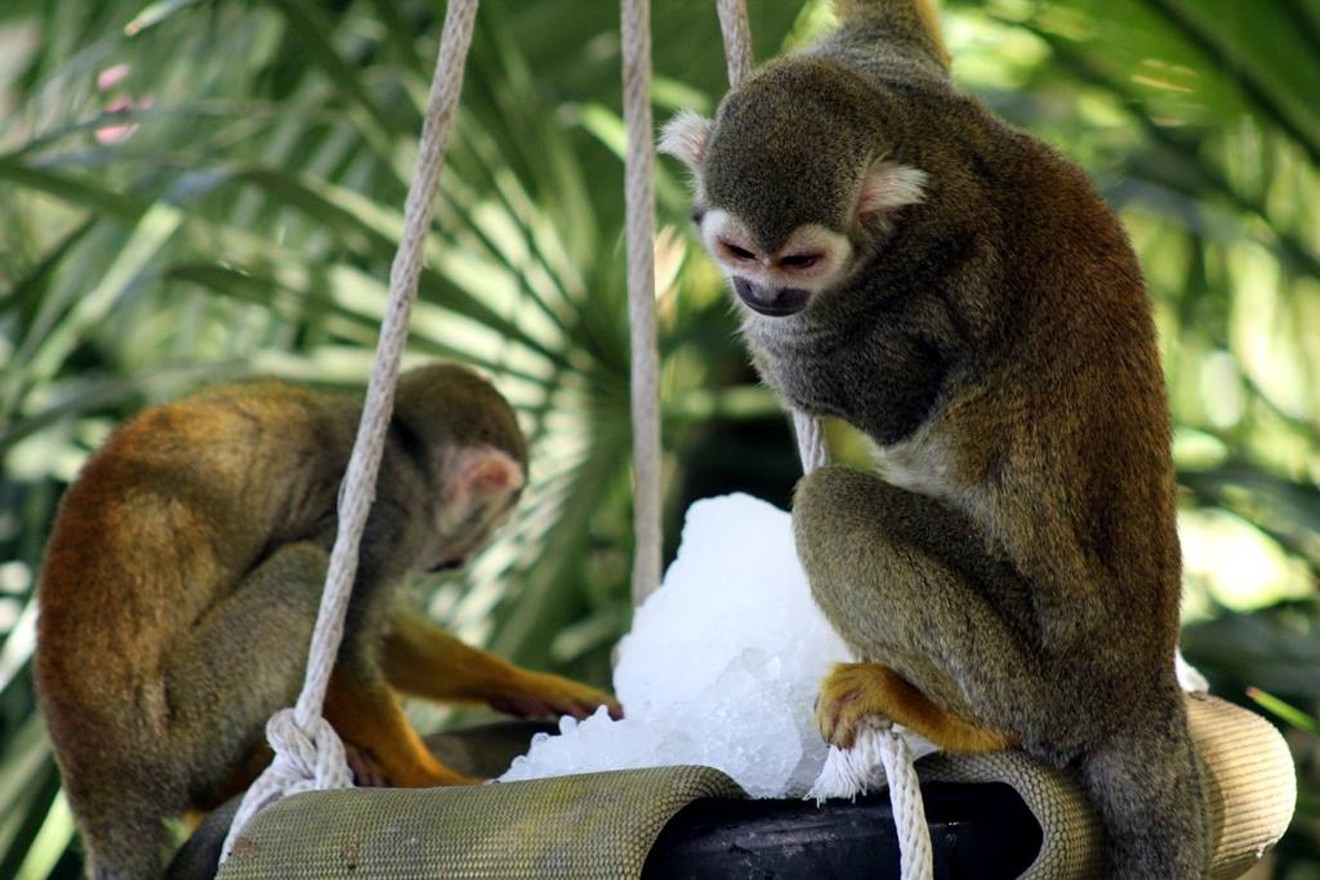 Time for summer treats. Phoenix Zoo
Hey Phoenix, it's time to get some plans. This weekend, you can relax on the lawn while watching Jumanji, play in the snow at Winter in July, or try not to spit your coffee out laughing during It's a Talk Show. For more things to do, visit New Times’ calendar. 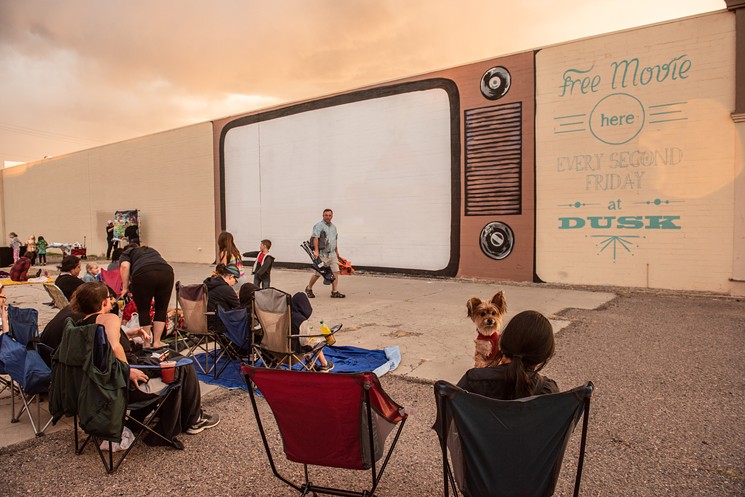 Gathering for Movies on Main in Mesa.
Ivan Martinez

Nearly five years after Robin Williams’ death, people still gather to watch the many films he made, including the 1995 film Jumanji, which imagines a giant, jungle-themed board game coming to life. Grab your lawn chair or blanket for a free screening happening at 8 p.m. on Friday, July 12, at The Sliver Lot, 219 West Main Street in Mesa.

National Comedy Theatre will be doing preshow activities, and the street will be lined with vendors and food trucks for the city’s 2nd Friday Night Out event. This month’s theme is Gamers’ Dilemma, so other offerings will include a vintage video game competition, plus an 8 p.m. trivia contest at the gallery at 101 West Main Street. Lynn Trimble

Meet several of the artists during the free opening reception from 6 to 8 p.m. on Friday, July 12. The exhibit, which continues through August 23, features works by more than three dozen creatives, including several inspired by desert blooms. Lynn Trimble

What used to be called the Deer Valley Rock Art Center is now the Deer Valley Petroglyph Preserve. Operated by ASU’s School of Human Evolution and Social Change, it’s located at 3711 West Deer Valley Road. The 47-acre preserve includes a quarter-mile nature trail with prehistoric petroglyphs, native plants, and desert animal life, where you can take the sunrise tour at 7 a.m. on Saturday, July 13. The preserve is also home to educational exhibits highlighting Arizona’s archaeological history. Bring water and a hat, and wear your closed-toe walking shoes, plus sunscreen. It’s an easy trail, but it never hurts to be prepared for the summer sun. The tour is free with $9 admission. Lynn Trimble Recently, Women’s World Cup soccer fans got to watch the U.S. defeat France, which might put an extra spring in your step during Experience France, a two-day event happening at the Musical Instrument Museum, 4725 East Mayo Boulevard. It starts on Saturday, July 13, when you can explore French music and culture from 9 a.m. to 5 p.m.

The lineup includes a curator talk, artist encounter, family film screening, and photo booth with themed props, plus crafts and musical performances. It’s free with $20 admission, but you can also buy French cuisine in the museum’s café or France-inspired gifts in the museum’s shop. Be sure to visit the France display in the European Gallery while you’re there. Lynn Trimble

Nearly 50 tons of snow is coming to the Phoenix Zoo for Winter in July, happening from 7 to 11 a.m. on Saturday, July 13. Wake up early and make your way to 455 North Galvin Parkway, where you can watch animals eat icy treats, play games, enjoy splash play areas, hear a DJ spin tunes, explore a fire truck, and get some rare snow time while you rock your favorite pair of mittens. Admission starts at $24.95 ($22.95 online). Bring money for extras like carousel and camel rides, plus food and drinks or souvenirs from the gift shop. Pro tip: The monkeys get treats at 9:30 a.m. Lynn Trimble

With so many holidays happening near the end of the year, it’s nice to spread the holiday spirit around a bit. Give it a try in historic downtown Glendale, where Christmas in July is happening from 10 a.m. to 4 p.m. on Saturday, July 13. You don’t have to stay up wrapping gifts or baking pies the night before. Just pick up your event map at 5836 West Palmaire Avenue, then start exploring. Expect plenty of shopping and hands-on activities. There’s even a cookie crawl, but only while supplies last. Bring bottled water if you’d like to donate to relief efforts for vulnerable populations. Lynn Trimble If you like a little coffee with your comedy, head over to Scottsdale for a live taping of It’s a Talk Show, featuring comic Kerri Gallagher. She’s turning her weekly podcast into a comedy talk show, complete with panels of comics talking pop culture plus interviews with industry experts. Her next free family show happens from 1 to 3 p.m. on Saturday, July 13, at JOJO Coffeehouse, 3712 North Scottsdale Road. The casually elegant coffeehouse serves food, espresso drinks, wine, beer, and nonalcoholic beverages. Lynn Trimble

If you’ve only watched The Rocky Horror Picture Show on your television screen, then you haven’t really seen the movie. Come to FilmBar in your best fishnets and give yourself over to absolute pleasure while watching the ultimate cult classic. The musical tribute to B-movies stars Susan Sarandon, Meat Loaf, and Tim Curry as “a sweet transvestite from Transexual, Transylvania.” Frankie’s Fishnets, a local “shadow cast,” will be there to guide you through every step of the “Time Warp.”

Be warned: The virgins will be sacrificed starting at 11 p.m. on Saturday, July 13, at 815 North Second Street. Tickets are $14. Jason Keil

Wearing long, puffy gigot sleeves and three-piece suits isn’t the coolest way to spend a summer afternoon in the Valley, but costumes are encouraged during the Old Fashioned Ice Cream Social at Heritage Square. First, you can learn about the lives of Phoenicians in the late 19th century when you go on a guided tour of the Rosson House Museum, a restored Queen Anne Victorian house. Then enjoy a sundae and a game of croquet.

Cider on tap and colored pencils make a nice pairing when you’re ready for a relaxing Sunday. Grab your sketch pad and pens, or anything else you like to draw with, and head to Cider Corps, 31 South Robson in Mesa. That’s where Cider & Scribbles is happening from 11 a.m. to 5 p.m. on Sunday, June 14. No worries if you don’t have drawing supplies, by the way. They’ve got you covered. The event is free, but bring money for food truck fare or drinks from cider mimosas to cider slushies if you want to indulge a bit while you’re sketching your little heart out. In case you’re curious, the event is part of Mesa Arts Center’s Creative Catalyst initiative, which promotes community engagement through creativity. Lynn Trimble
KEEP PHOENIX NEW TIMES FREE... Since we started Phoenix New Times, it has been defined as the free, independent voice of Phoenix, and we'd like to keep it that way. With local media under siege, it's more important than ever for us to rally support behind funding our local journalism. You can help by participating in our "I Support" program, allowing us to keep offering readers access to our incisive coverage of local news, food and culture with no paywalls.
Make a one-time donation today for as little as $1.