Hanging out near the Alwun House stage during the IGNiGHT event, which was organized earlier this year by Arizona Burners. Lynn Trimble
The weekend has arrived. You can enjoy the music around you during Make Music Day, get involved at Arizona Burners, or learn some fun facts at National Typewriter Day Type-In. For more things to do, visit New Times’ calendar.

Artlink is bringing the international Make Music Day celebration to Phoenix for the first time on Friday, June 21, when musicians of all skill levels will be making music in various spaces around the city. Make Music Day started as Fête de la Musique in France back in 1982, and now it happens in more than 1,000 cities in 120 countries. Look for free music all around the city that day, in traditional performance spaces and unconventional venues such as art galleries and public parks. The exact lineup is still coming together, but we know the talent is out there, so we’re expecting good things. Lynn Trimble 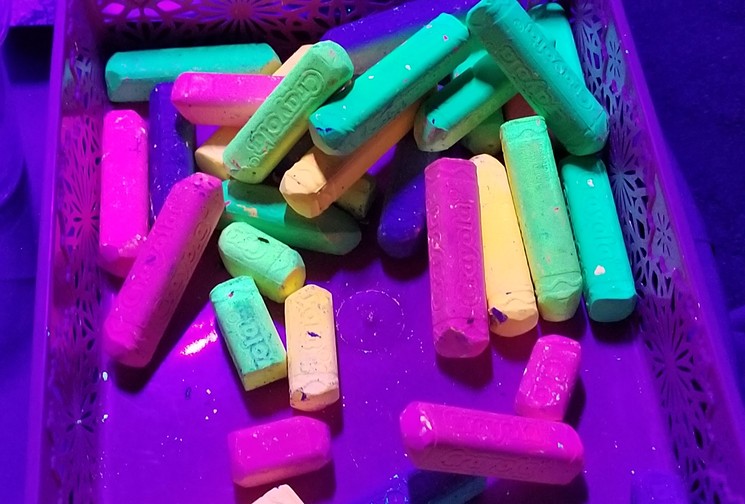 Get ready to chalk it up on Grand Avenue.
Kyllan Maney

Arts and historic preservation take center stage on Grand Avenue. For years, the neighborhood has showcased its funky side during the Grand Avenue Festival. Now, it’s launching another free event that highlights its community spirit. At least a dozen artists will be participating in the inaugural Grand Ave Chalk Art Festival, happening from 7 to 10 p.m. on Friday, June 21, along a strip of the quirky diagonal street that runs between Ninth and 15th avenues. 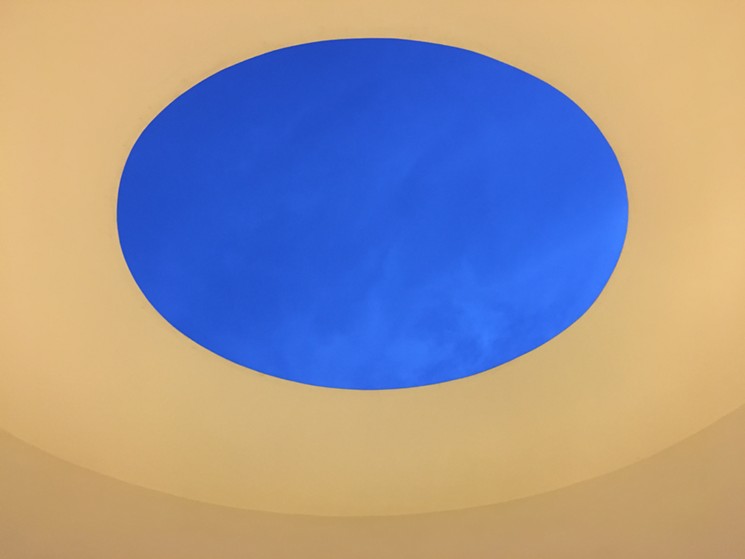 Sunset in the Skyspace

Things are looking up at Scottsdale Museum of Contemporary Art, thanks to Knight Rise, one of two James Turrell Skyspace sculptures located here in the Valley. The internationally renowned artist, represented by Lisa Sette Gallery in midtown Phoenix, is a master of using light as a medium. For decades, he’s been working on the monumental Roden Crater, an environmental work located near Flagstaff. You can experience his work during a special Sunset in the Skyspace for families and teens, happening at SMoCA, 7374 East Second Street in Scottsdale, at 7:30 p.m. on Friday, June 21. Tickets are $10 and they include light refreshments. Lynn Trimble

'Celebrating the Life of Chester Bennington'

It’s been two years since the death of Chester Bennington, Phoenix native and beloved singer for Linkin Park. Phoenix photographer, musician, and Phoenix New Times contributor Jim Louvau, a close friend of Bennington who often took his picture both offstage and on, is sharing the photos he took of his friend in a new exhibit called “Celebrating the Life of Chester Bennington, a Photo Exhibit by Jim Louvau.” The opening reception happens from 6:30 to 10 p.m. on Friday, June 21, at monOrchid, 214 East Roosevelt Street. You need to be at least 21 to attend. Tickets are $35, and a portion of the proceeds will go to 320 Change Direction, a charity dedicated to raising mental health awareness co-founded by Bennington’s wife in the aftermath of his suicide. Lynn Trimble If you’ve watched one episode of the Netflix reality show Queer Eye, it shouldn’t come as a surprise that the Fab Five’s energetic grooming expert, Jonathan Van Ness, attended the University of Arizona on a cheerleading scholarship. He’s also hilarious, as evidenced by his Funny or Die recap show Gay of Thrones. Now, the erstwhile hairdresser is tasting his own medicine and getting out of his comfort zone, much like he and his costars encourage participants to do on their program, by trying stand-up comedy. His show is titled Road to Beijing, which is a play on his obsession with figure skating.

Once each year, the Arizona Burners community, affiliated with the famed Burning Man gathering, holds a town hall meeting. “Burners” and other community members can learn about Burning Man developments and share their own ideas with folks who embrace the 10 principles of the movement, such as radical inclusion, decommodification, and civic responsibility. Local burners brought their radical self-expression to Alwun House in April for IGNiGHT, welcoming community members to share an evening of art, music, fire performance, and other creative offerings. Now they’re welcoming folks to the free Arizona Burner Town Hall, happening at 2:30 p.m. on Saturday, June 22, at the Walter Dome, 6425 East Thomas Road. Lynn Trimble

Try your hand at drawing in Tempe.
Lynn Trimble

Celebrate the fine art of drawing on Saturday, June 22, when The Gallery at Tempe Center for the Arts, 700 West Rio Salado Parkway in Tempe, presents its free Draw-A-Thon festival from 10 a.m. to 10 p.m. Artists Brandi Lee Cooper, Emily Ritter, Abbey Messmer, and Maria Salenger will be on hand during the family focus hours from 10 a.m. to 2 p.m. Look for artists Jerry Jacobson and Justin Rodier during teen focus hours from 2 to 6 p.m. After 6 p.m., you can enjoy happy hour with live music by Ruthie Wilde, plus interact with artists Laura Spalding Best and Matt Dickson. Get ready to doodle, sketch, and draw your little heart out. Lynn Trimble

Cake or death. People covered in bees. Noah’s Ark as a speedboat. The absurdist bits of British-born stand-up comic Eddie Izzard are legion, and they’re all comedy gold. Like the majority of Izzard’s material, they’re hewn from a mix of pop culture, history, and modern-day politics, delivered in free-association fashion, and oftentimes punctuated with surreal nonsequiturs.

Izzard will be armed with plenty of new bits and material when he brings his latest show, WUNDERBAR, to the Valley this weekend for a two-night stint at the Orpheum Theatre, 203 West Adams Street. The performance at 8 p.m. on Saturday, June 22, is close to selling out, so you’ll have to call 602-262-6225 to purchase admission. Tickets to the show at 7 p.m. on Sunday, June 23, however, are available for $52 to $74. Benjamin Leatherman

It's going to be a good time.
SanTan Brewing Company

The East Valley is rapidly becoming a local mecca for craft beer. The Downtown Chandler Brewery Crawl is your chance to sample what the area has to offer. After you start things off at San Tan Brewing Company with a beer and a burrito, you’ll chug along to FLIX Brewhouse, take in the rooftop lounge of The Perch, and visit Craft 64 and Quarthaus.

Hop to it at 2 p.m. on Saturday, June 22. The crawl begins at San Tan Brewing Company, 8 South San Marcos Place in Chandler. Tickets are $30, which includes one beer from each of the five locations, plus the burrito and popcorn. Jason Keil

There are no cars allowed on South Mountain Park’s main roadway on Silent Sunday, so those who wish to bike may do so without meeting the business end of a Ford F-150. That doesn’t make the journey upward (or down, for that matter) any less dangerous. AZ Women Racing is hosting Road Bike Skills 101 during this time to help you safely navigate the streets and trails on two wheels so you can enjoy the view from the top.

Start pedaling along from 6 to 7 a.m. on Sunday, June 23, at South Mountain Park, 10919 South Central Avenue. This is a free event. Please RSVP at [email protected] Jason Keil Check out "Color Riot!" while you're at the Heard Museum.
Craig Smith

Filmmaker Russell Martin is coming to the Heard Museum, 2301 North Central Avenue, for the screening of Two Spirits, which explores the history and lives of two-spirit Native Americans, who live apart from the traditional gender binary. The free screening runs from 11:30 a.m. to 1 p.m. during Free Summer Sunday, which means you can also enjoy free museum admission that day, when museum hours are 11 a.m. to 5 p.m. Artist Gabriela Muñoz will be demonstrating printmaking all day, and the lineup also includes weaving demonstrations by Diné artists Velma Craig and Daniel Keams, Jr., at 11 a.m. and 4 p.m. You can hear music by Harmony Project at noon and 2 p.m. Featured exhibits include “Color Riot! How Color Changed Navajo Textiles.” Lynn Trimble

Look what we found in the art section at Changing Hands in Phoenix.
Lynn Trimble

People who love literature always seem to find each other somehow. But it’s not every day they get to converge on a space filled with typewriters, which signal for so many the terrifying beauty of trying to translate one’s deepest feelings and ideas onto the page. If you’ve got a soft spot for clunking keys and the charming ding of the carriage return, you’ll want to hit the free National Typewriter Day Type-In happening from 11 a.m. to 4 p.m. on Sunday, June 23, at Changing Hands Bookstore and First Draft Book Bar, 300 West Camelback Road. It’s a chance to mingle with fellow word geeks, see typewriter displays and demonstrations, and get fun factoids about typewriter history. Naturally, you’re free to BYOT (bring your own typewriter) along for the celebration. Lynn Trimble
KEEP PHOENIX NEW TIMES FREE... Since we started Phoenix New Times, it has been defined as the free, independent voice of Phoenix, and we'd like to keep it that way. With local media under siege, it's more important than ever for us to rally support behind funding our local journalism. You can help by participating in our "I Support" program, allowing us to keep offering readers access to our incisive coverage of local news, food and culture with no paywalls.
Make a one-time donation today for as little as $1.