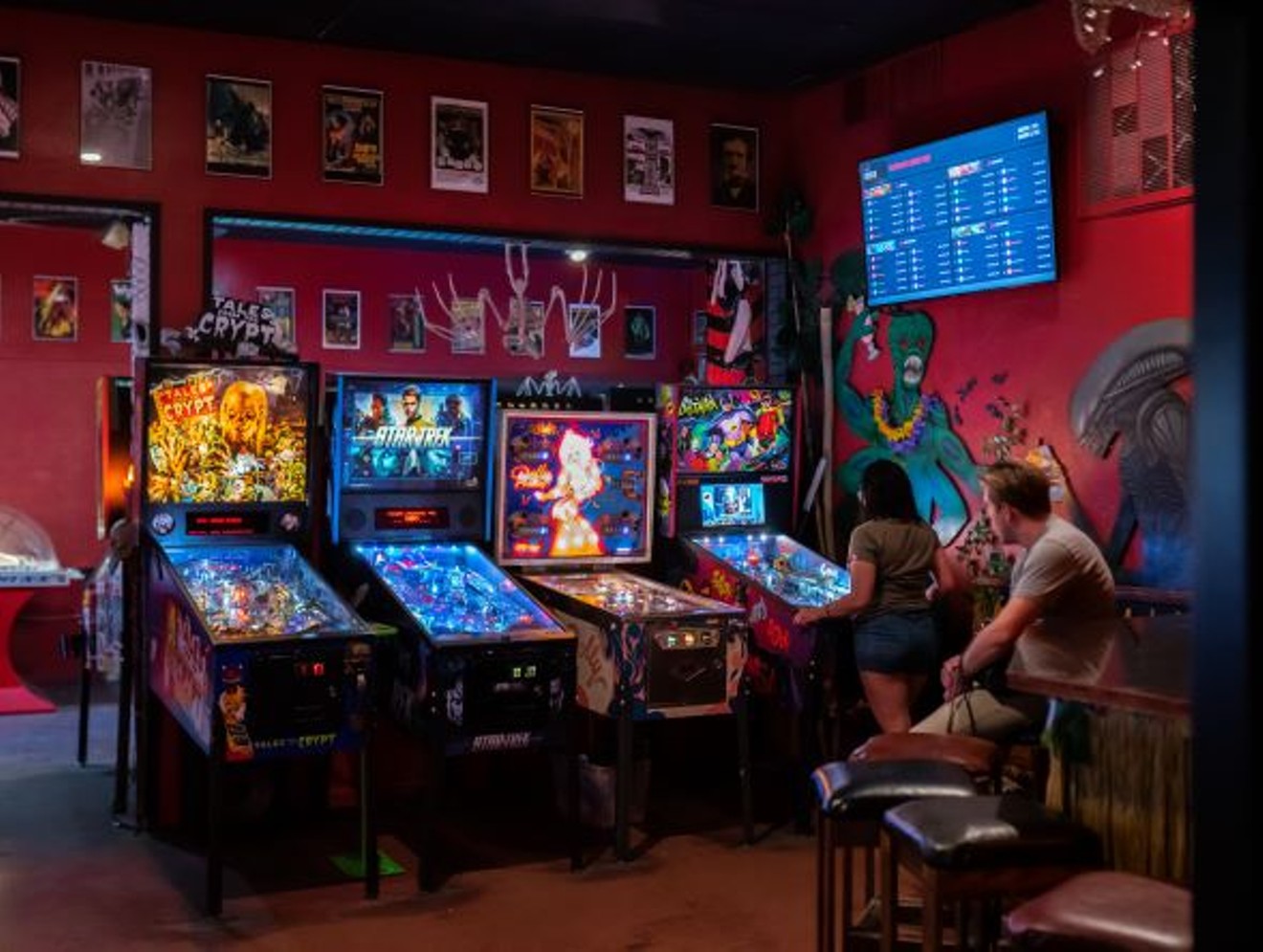 Her Bat’s wings have continued to grow, and now, with a recent expansion, there’s more space and ways to get your game on.

When she first opened the place, it was on the heels of an annual ZapCon arcade and pinball convention, which Bess is a part of. Yucca owners wanted to open an arcade, and folks kept directing them to her.

Initially, she wasn’t interested in taking her love of pinball in that direction, but their conversations ended up dictating the path to a small, electrifying wonderland. “Basically,” she laughs, “they twisted my arm enough, and I agreed to start a very small, reasonably sized, easy-to-manage arcade."

The arcade started with about 13 pinball machines and 10 arcade games, Bess says, and has been growing since. “About two years ago, it doubled, and now we have doubled in size again.” The new room of the arcade opens to the east of the current spot and holds about two dozen games. It opened the first week of January.

“We have about 60 pinball machines now and around 15 or so standup arcade games, maybe a little bit more than that. We also have a bunch of Japanese rhythm games. We have added a lot of classic and new games,” Bess says.

A “giant” Alien Shooter and a James Bond 007 Premium pinball game are among the new additions you can get your hands on.

The games portion of the expansion is done, but Bess says there’s still some work to be done.

“The games are here, the walls are painted, and there are lights in the ceiling. For round two, we are gonna build a new bar in this room, get rid of the old bar that’s in the old room, and that area will become bathrooms.” She expects that it will all take a few more months to complete.

And yes, Electric Bat Arcade has its own bar. An arcade inside a bar with its own bar, so you don’t have to venture too far from your favorite game to get a drink. If that’s not cool enough, the place opens at 6 a.m., and Bess says it’s not uncommon for folks to get started pushing buttons and activating flippers at that hour of the day.

Hence the expansion, Bess says: The number of people into pinball keeps growing.

“Even six months ago, we thought 50 people showing for a Tuesday night tournament was a lot, and just this past week, there were 77, so we expect soon we’ll see that league night has 100 people.” She adds that even while we were chatting — on a Thursday afternoon — the place was pretty full of gamers. 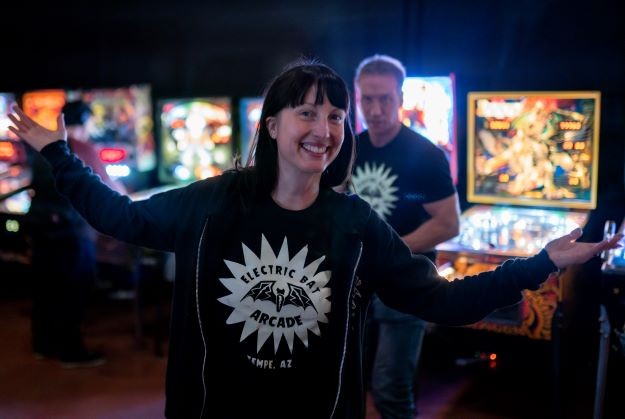 Rachel Bess of Electric Bat Arcade.
Cale Hernandez
If you’re into arcade action, Electric Bat is beyond inviting. Bess, a prominent local painter, has infused the place with her aesthetic of deep, lush colors. The red and black walls feature horror-themed art, including large cutouts of figures like Creature from the Black Lagoon. The soft lighting allows the games’ colors and motion-filled components to flash and pop, surrounding you, so you are fully embraced by the environment.

In addition, she’s excited about the possibility of taking one wall that’s more than 50 feet long into a mural.

Though she never expected to become an arcade owner, Bess is thrilled by the success for several reasons.

“We currently have the biggest pinball arcade in Arizona now — that’s pretty crazy,” she says. They also have a second location in Yucca’s Flagstaff bar.

She’s also learned how to be a one-woman repair crew on many occasions, along with her staff, including her husband, Cale Hernandez. “We have learned how to do repairs mostly from having to do it ourselves. Eighty percent are problems that you can figure out what’s needed to fix them right away, and the other 20 percent require some head scratching.”

“The people” are another part of the equation that makes her job a blast, Bess tells us. “We have met – and continue to meet – so many people, and many of them are just weird and unique in all the best ways. There’s a crazy crew of regulars, and all these people make everything super fun.”

Bess encourages people that want to check it out to come on Tuesday for League Night. “You can come and play; it costs $1. It’s a friendly competition, and everyone is really helpful and supportive.” She’s seen regular league play turn some folks into pinball masters.

“Pinball just seems to be getting more popular all the time,” Bess says, looking forward to seeing the new faces the more prominent space will attract.

Electric Bat Arcade is located inside Yucca Tap Room at Danelle Plaza, 25 West Southern Ave, Tempe.
KEEP PHOENIX NEW TIMES FREE... Since we started Phoenix New Times, it has been defined as the free, independent voice of Phoenix, and we'd like to keep it that way. With local media under siege, it's more important than ever for us to rally support behind funding our local journalism. You can help by participating in our "I Support" program, allowing us to keep offering readers access to our incisive coverage of local news, food and culture with no paywalls.
Make a one-time donation today for as little as $1.