Curious About Sedona’s Weed Scene? Check Out These 5 Cannafriendly Joints 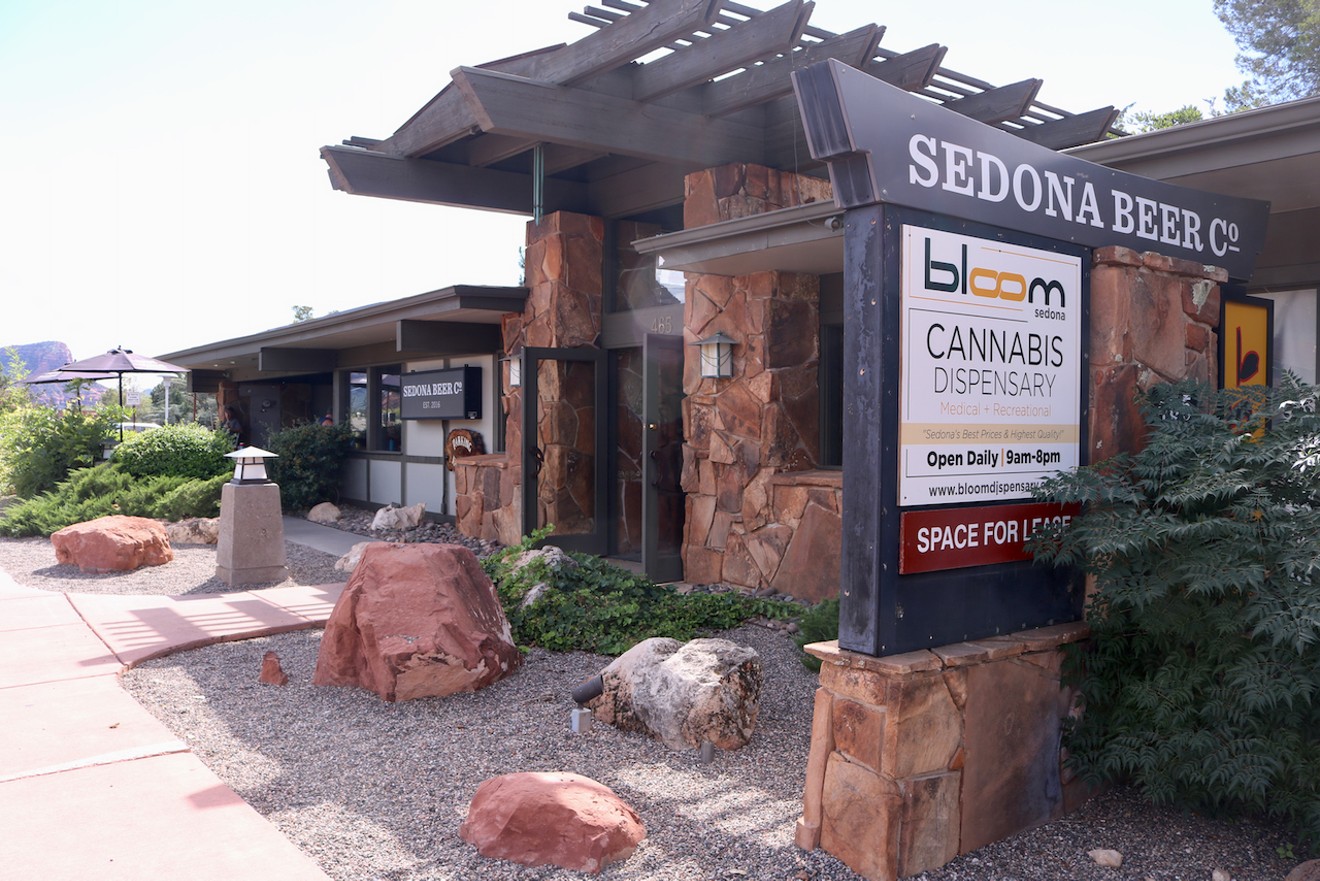 The dispensary was formerly known as Bloom Dispensary before Curaleaf took over. The signage is still present. Mike Madriaga
Sedona is a bucket list destination for both global travelers and metro Phoenix stoners.

Smoking weed 4,350 feet above sea level can elevate your high and boost your consciousness without the plant's psychoactive THC, and consuming CBD-infused beverages or topicals is an enlightening option in the Sedona vortexes, too. Just ask attendees at the popular VortiFest in September.

In Sedona, there's an abundance of outdoor spaces in which you can wander around, ground yourself, and enjoy Red Rock Country and breathtaking vantage points. While travelers speak of healing energies and therapeutic hot spots throughout the area, cannabis consumption also has been a source of healing and therapy.

Sedona's only a two-hour drive from metro Phoenix, yet it can sometimes feel as though it's a different world. In case you run out of cannabis or forget your CBD oils at home, here's a list of cannabis-friendly locales in and near Sedona. 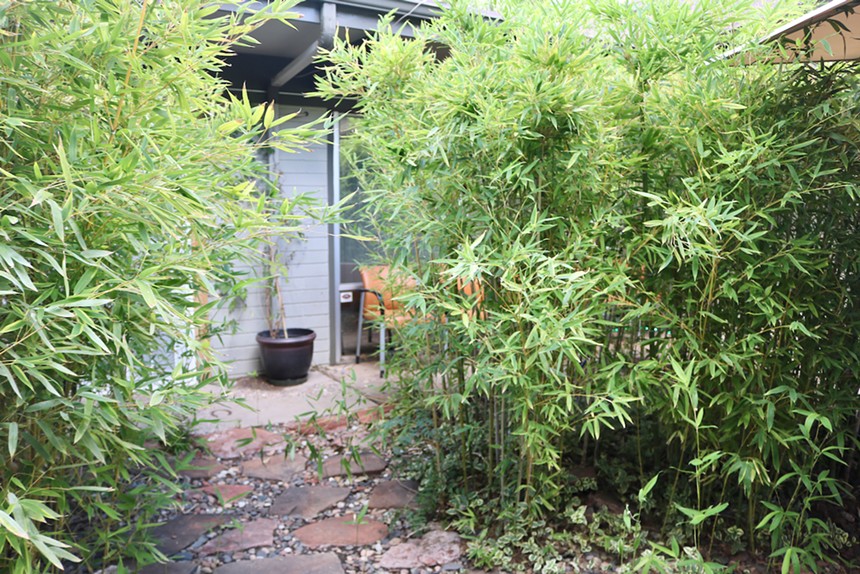 465 Jordan Road, Sedona
928-202-3512
Curaleaf is the only dispensary in Sedona's city limits. While there are other Curaleaf locations in metro Phoenix, they do not share the Red Rock Country backdrop that this one offers. The serenity and mystical vibe at this elevation is evident to the cannabis customer as they walk toward the store's entrance. Medical and adult-use consumer lines are separated by a bamboo garden, miniature pagoda statues, a large tree, and a flowing water installation.

In the showroom, the nature motif continues with a simulated wood floor and a vast amount of flowers displayed in white-colored cases. The dispensary, formerly known as Bloom Dispensary before Curaleaf took over, has a smaller showroom than ones you might be used to in the Valley. But don't fret, as it carries enough pre-rolls, flowers, wax, and edibles to uplift you into the city's vortexes. Yelpers give the spot a four out of five. The dispensary is open daily from 9 a.m. to 8 p.m. Crystal, a bartender at Lacuna Kava Bar, invites cannabis consumers to have fun at the first kava bar in Sedona.
Mike Madriaga

150 AZ-179, Suite 9, Sedona
928-554-1025
While Lacuna Kava Bar, the first kava bar in Sedona, doesn't sell cannabis per se, it does have a CBD wine drink and pre-roll combo. The bar's CBD products, including a bottle of Melo wine, are derived from Arizona-grown hemp plants without the psychoactive effects of THC.

Several cannabis users in Sedona who spoke with New Times pointed to Lacuna as a locale where folks can comfortably smoke a joint with THC, which the customers bring in on their own.

"We just prefer the people to be discreet, and if anyone asks, you're smoking CBD," said Crystal, a Lacuna bartender who asked to be referred to by only her first name. "Otherwise, anything that's natural, and if you're not bothering anybody — have fun," she said.

Crystal also serves kava, a tea derived from the root of Piper methysticum, a Polynesian shrub that translates to "enchanting pepper." The plant has been used for nearly 3,000 years by native tribes in Tonga during community ceremonies or to reach higher levels of consciousness.

The botanical elixir lounge located at the Red Stone Center strip mall is set up like a bar. Instead of alcoholic beverages, the staff serves natural drinks focused on wellness. They also make kratom infusions, another traditional plant medicine that is consumed for a natural boost, amongst other benefits.

Come hang out and listen to live DJs and musicians. Or, smoke a joint outside and draw mandalas inside with Antoine Lamar, a Chandler artist and a traveling massage therapist who drives to Sedona once a month to set up inside. "Everything feels better when done in Sedona because there's a palatable healing energy around here, so it just makes the vibe in everything feel good," Lamar said.

The plant-based wellness drink spot and "canna-buddy" hangout also has a flagship location in Phoenix. It's open daily from 11 a.m. to 11 p.m., though doors stay open until midnight on some days. 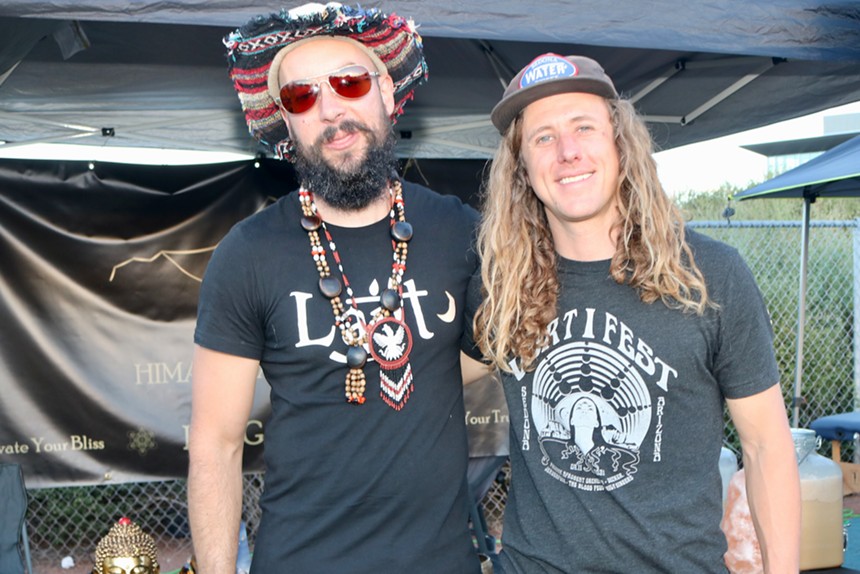 sedonagreenhouse.org
While the nonprofit helps the community grow fruit and vegetable gardens by providing educational outreach and community gardening events, Sedona Greenhouse Project also has people who assist in properly growing cannabis in the desert.

"It's multiple gardens," said Patrick Sullivan, a volunteer and educator at the nonprofit. "They might be in someone's backyard; there's two in city lots; there's another that has a big growing space that is right on the river [where] they are growing cannabis. So it's all about knowing how to take care of the plant."

In Arizona, a 21-year-old resident can legally plant up to six marijuana plants at their residence.

Sullivan — who also owns Gaia Wellspring, a small company that bottles wild-crafted herbs and fungi botanic creations — smokes the same weed he grows. "I help with a lot of growing flowers in Sedona," he said. "So if people are interested in coming up here and spending a day, I'm a part of the project where we go to a different garden every day of the week.

The project was formed in 2020, Sullivan explained, when "organically people started getting together at this biodynamic farm in Sedona, which means you are using everything as a resource, even the position of the moon. When growing cannabis, you can harvest on certain days when you know energies are being pulled into the plant based on the moon's position." 301 AZ-89A, Sedona
928-862-2756
Ascend Hemp Oil is not your standard CBD company. Instead, its salve and other products are activated with sound and crystal energy. Aalia Kazan launched the business in 2018. "We use frequency because this was a sound healing clinic," Kazan said. "And we provided sound and crystal healing [sessions], so when people lay down, I put crystals on their bodies, then, I would play crystal bowls, chant, and do toning. So now, I infuse the CBD oils the same way."

Ascend Hemp Oil also sells full-spectrum oils, CBD gummies, and organic skin care. The spot is located at the Sacajawea Plaza in uptown Sedona and is open from 11 a.m. to 6 p.m on Tuesday through Friday and 12 p.m. to 5 p.m. on Saturdays. The Harvest House of Cannabis dispensary closes at 8 p.m., allowing travelers to score some bud before checking into their hotel or Airbnb in Sedona.
Mike Madriaga

2400 Arizona 89A, Cottonwood
928-634-5233
With almost two dozen locations throughout Arizona, Harvest House of Cannabis in Cottonwood is the last dispensary you'll see when you're traveling from metro Phoenix to Sedona on State Route 89A. The brick building opens at 7 a.m. and closes at 8 p.m., allowing travelers to score some bud before checking into a hotel or Airbnb in Red Rock Country. Don't pass up daily and weekly deals. Harvest HOC in Cottonwood is about 20 miles southwest of Sedona.
KEEP PHOENIX NEW TIMES FREE... Since we started Phoenix New Times, it has been defined as the free, independent voice of Phoenix, and we'd like to keep it that way. With local media under siege, it's more important than ever for us to rally support behind funding our local journalism. You can help by participating in our "I Support" program, allowing us to keep offering readers access to our incisive coverage of local news, food and culture with no paywalls.
Make a one-time donation today for as little as $1.