So yes, NFL fans can smoke a joint inspired by pro football players while watching all the Sunday action on TV. It might even help fans feel less anxious about their wagers on the games. Sports betting is big in Arizona, after all.

McMahon, Kyle Turley, and Eben Britton launched their brand of flower, distillate and pre-rolls in California in July 2021. The former pro athletes brought it to the Valley in August when they met fans and signed autographs at The Mint dispensary in Guadalupe. The Mint sells Revenant's Skywalker OG, Kush Cookies, and King Louis in flower or boxes of five pre-rolls.

"We really wanted to bring cannabis as medicine to the forefront in the cannabis legalization realm," Britton told Phoenix New Times. "It's a 10,000-year-old medicine, as far as I know."

"Kyle, Jim, and [I] have been speaking about cannabis as medicine for the football players for a while now," he added. "The number one issue facing NFL football players is CTE, chronic traumatic encephalopathy."

CTE is a progressive degenerative brain disorder that occurs in people with a history of repetitive head impact, often received during contact sports, such as football, military service, or other activities involving blows to the head. Britton believes that cannabis is "the only remedy on the planet that helps to heal the physical tissue in the brain. The federal government has a patent on cannabinoids, which have neuroprotectants and antioxidants."

Britton was drafted by the NFL in 2009 and played offensive tackle for the Jacksonville Jaguars and the Chicago Bears. Before that, he played football for the University of Arizona. In 2016, two years after Britton left the NFL, he told the New York Post that he played three NFL games while high on marijuana. "My performances were solid, and I felt really good after," Britton said. The cannabis sometimes relieved “psychological distress or sciatica or pain in my shoulders," he added.

McMahon, who quarterbacked the Chicago Bears to a Super Bowl win in 1986, moved to Scottsdale in 2010, the same year that Arizona legalized medical marijuana.

"We started Revenant in California two years ago, and now we're coming to Arizona," McMahon said. "We got different strains, [and] I'm still looking for a strain to put my name on. I want something that's pretty heavy-duty. I'm strictly an indica OG [consumer; it] is what usually works for me best."

McMahon has said in podcast interviews that he started smoking weed in 1973 and continued to do so throughout his NFL career in the 1980s-1990s. He played for the Arizona Cardinals in 1994.

Turley was an offensive tackle for the New Orleans Saints. During his second NFL season, he started smoking weed, he told New Times. "A hall of fame player introduced [weed] to me because he saw me getting pulled out [of the game], I was going through a lot of personal stuff at the time, and the pressures of the game. I smoked that joint in my house and sunk in the couch and was just like, 'Wow.' And that was my first experience with marijuana, and I slept like a baby that night. I got up the next day and went on to an All-Pro season playing the best football of my life. My body recovered; I was just a monster." 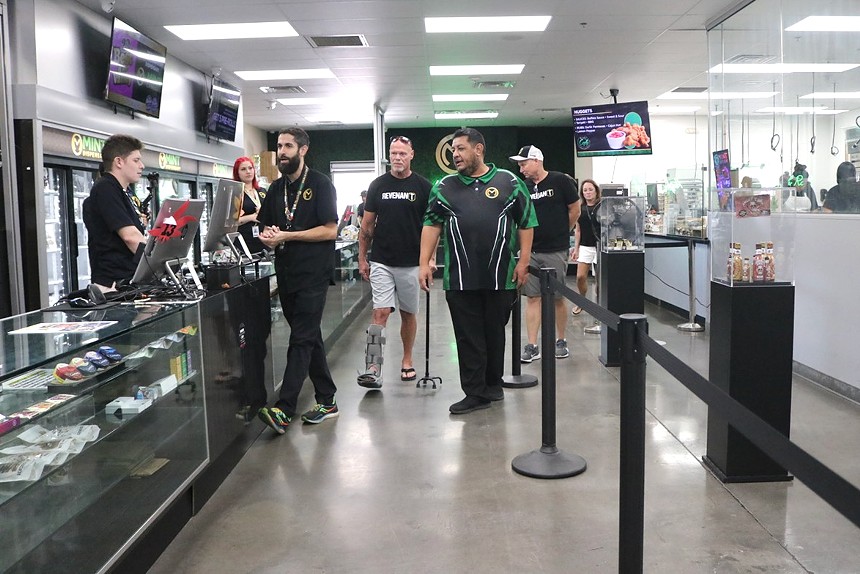 'Revenant Did It Right'

Charles Flanagan met with McMahon, Turley, and Britton during the brand launch at the Mint store in August. Flanagan recently smoked Revenant's "very dense indica hybrid," he said. "The athletes would want that in the selection as when smoked, it was nice and relaxing, but it wasn't sedating and helped with my neck pains. And, I could still function."

"One of the things they attached their name to is the medication has to be high yielding," Flanagan said of the retired professional NFL players who created Revenant MJ.

Flanagan, who lives in Gilbert, is a sales manager at 48 Farms Grow and a local cultivator. He's also a celebrity personal trainer who has to trek to California. So he's often on the move. "Revenant did it right," he said. "They use glass jars [in] which I was able to reseal the flower. And while other brands use plastic baggies where you can't see the product, with Revenant, I could see my flowers, which were beautiful. Also, I noticed they were hand-cut versus machine trimmed."

Flanagan agreed with Britton about the healing impact of cannabis. "Weed is a neuroprotectant, so it's really big at protecting your brain, and it's anti-inflammatory, so when you train, and your muscles rip at the fibers that cause inflammation, cannabis minimizes that," he explained.

While the NFL had stricter rules regarding partaking in weed consumption back in the day when Revenant MJ founders played pro football, there are still severe consequences when players test positive for THC in their systems, Turley said.

"Their new policy states that they rose their THC level to 150 nanograms, which is the [International Olympic Committee] level. And if you test positive for over 150 nanograms of THC, in the NFL now, they have agreed and made a new law, it is an automatic at least one game, you have to play without pay and up to three games of playing and practicing, going to work — without pay," Turley said.

And the suspensions can be costly.

"I was a seventh round draft pick [in 1998], that was six-figure checks a week. Some guys potentially now with the contracts that they have a million a game [they could possibly lose] for using a medicine as the only neuroprotectant in the world," Turley said.

Turley also played for the St. Louis Rams and Kansas City Chiefs before retiring in 2007.

"Our new push is to normalize cannabis and get this into the streets," Turley added.

McMahon said the NFL still has a long way to go in reforming its cannabis rules.

"I think the NFL is starting to change their rules. I don't know if they are going to keep testing for it or if the penalties won't be so severe because it's a ridiculous rule when they can shove all of these opioids down your throat even though opioids can be addictive and kill people," he said.
KEEP PHOENIX NEW TIMES FREE... Since we started Phoenix New Times, it has been defined as the free, independent voice of Phoenix, and we'd like to keep it that way. With local media under siege, it's more important than ever for us to rally support behind funding our local journalism. You can help by participating in our "I Support" program, allowing us to keep offering readers access to our incisive coverage of local news, food and culture with no paywalls.
Make a one-time donation today for as little as $1.