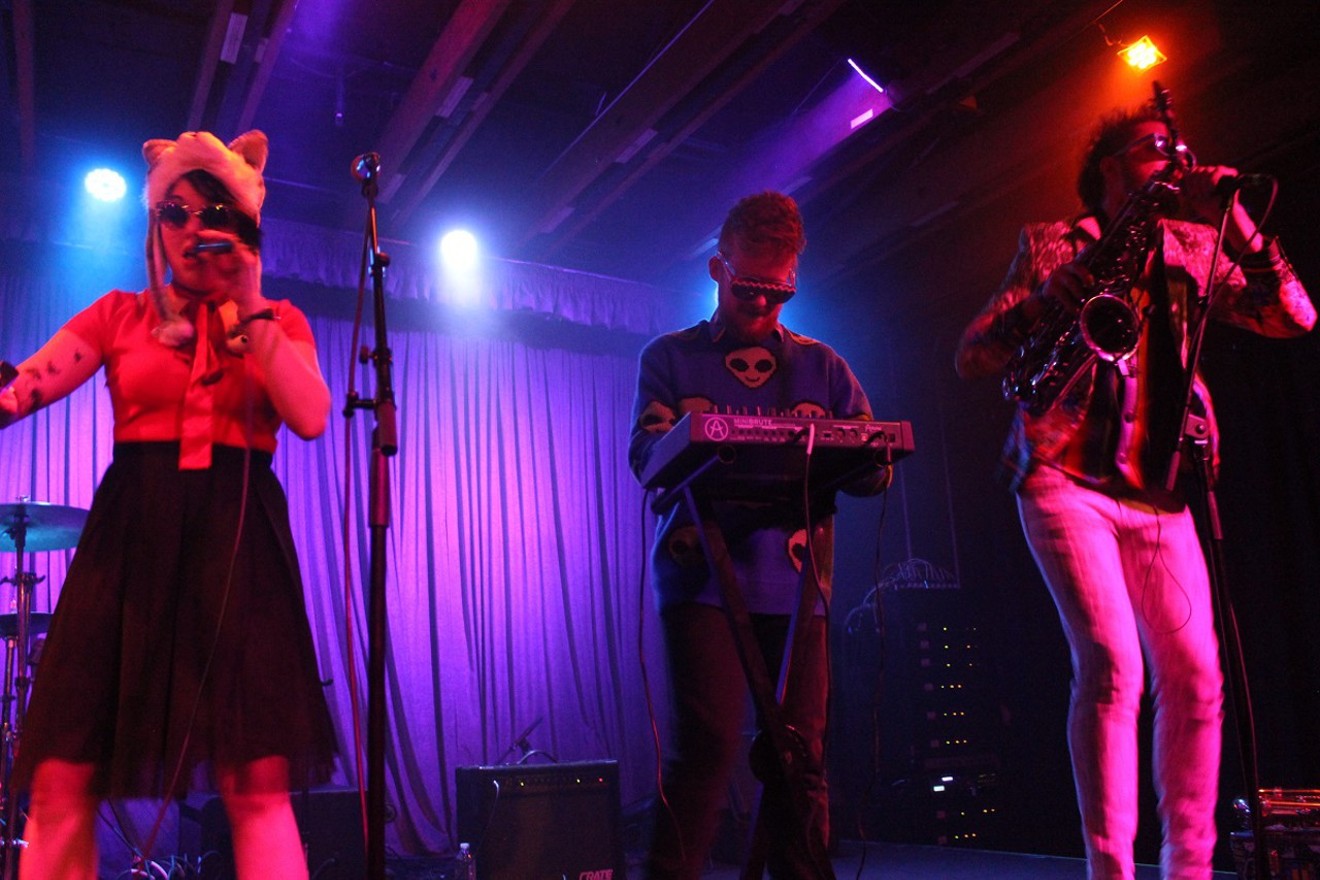 The Wet Delicates perform at the 2017 Phoenix Rock Lottery. Michelle Sasonov
Just after sunrise on Saturday, January 27, a group of 25 Phoenix-area musicians with different styles and backgrounds will gather at Crescent Ballroom. Many will be meeting each other for the first time, as veterans with decades of writing and touring experience shake hands with young creatives just starting out in the industry.

Moments later, the musicians will be randomly sorted into five brand-new bands. They’ll have just one day to work together to compose three original songs and learn a cover that they will perform that night to a full house. When the bands return to Crescent Ballroom and take the stage, they’ll no longer be strangers, but rather collaborators and possibly even friends. This is the Phoenix Rock Lottery.

The beloved event turns five this year, and the lineup is packed with well-known and emerging talent. The participants cover broad swaths of the local scene, ranging from James Pope of the Phoenix Afrobeat Orchestra and Scott Hessel of the Gin Blossoms to Anna C. of Willetta and Seth Smades of Luxxe. Groovy soul beats could be shuffled together with rock guitar, spacey synths, and folksy vocals. And nobody really knows what it will sound like.

That’s part of the magic of the Rock Lottery and why it continues to feel fresh with each edition.

It all started in 2014 when Valley concert promoter Stephen Chilton, owner of Psyko Steve Presents, had a flash of inspiration. During an interview at Jobot, Chilton tells the story of how the Rock Lottery began and how it has evolved.

“They used to do a similar event at Plush down in Tucson, and I saw the poster for it, and my friend kind of explained it to me, and I was like, ‘That idea is awesome! I’m going to steal it,’” Chilton says.
Chilton never actually went to the event in Tucson. Once he understood the core of it, he didn’t want to know the details — he just wanted to try doing it his way. On the drive back to Phoenix, he was bursting with thoughts and excitement, and by the time he made it home, he’d already pretty much formed the inaugural lineup in his head.

That first year, Chilton invited 20 musicians to participate, and 18 of them made it to the show, including Matthew Noakes of Black Carl, Danny Torgersen of Captain Squeegee, and others. “It kind of booked itself,” he says. “There wasn’t a lot of thinking or talking about it. I knew these people would be good. We rounded them up and did it.”

One of Chilton’s all-time favorite Rock Lottery memories is from that first year, when one of the bands selected Jimmy Eat World’s “In the Middle” as their cover and performed it with one of its writers (and fellow Rock Lottery participant) Jim Adkins in the room. “Half the room turned and looked at Jim when they started,” Chilton says. “Everyone around Jim is all laughing and having a good time, and Jim was smiling, and it was pretty hilarious.” 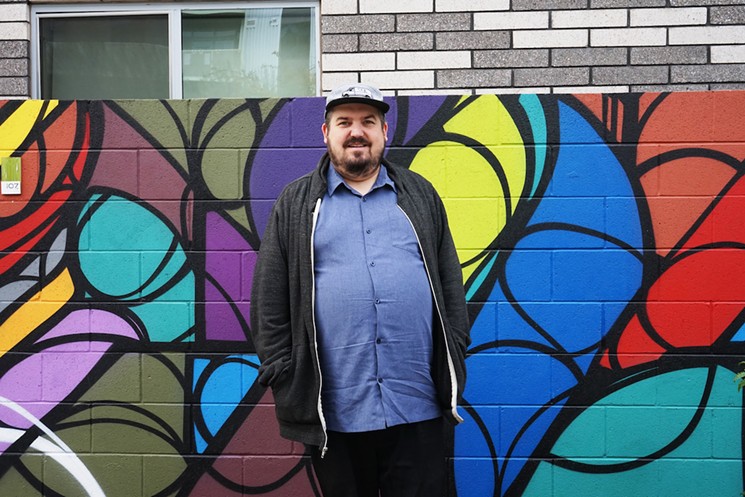 Stephen "Psyko Steve" Chilton is the creator of the Phoenix Rock Lottery.
Meagan Mastriani
Members of the first lineup had so much fun that many of them returned for the second Rock Lottery in 2015, and Chilton expanded the roster to include 25 people. Almost everyone who participated said they would do it again in a heartbeat, and Chilton realized he would need to be deliberate in putting together unique lineups if he wanted to keep things interesting. Since the third round, there have been no repeat performers.

That’s been a challenge for Chilton, especially this year.

In the past, he’d mostly invited people he knew personally. But now he has exhausted that list and started seeking recommendations from friends in the local scene. Chilton especially wanted to find multi-instrumentalists from genres beyond straightforward rock, and he sought out folks who had the right personality and desire to collaborate. The semi-crowdsourced 2018 lineup is possibly the most diverse so far.

“A lot more time and discussion went into this year’s lineup than past years,” he says. “I also know the musicians a lot less than I have in the past, so I don’t know what they’ll do. That’s one of the great things.”

Some of the participants include bandmates of previous performers. Guitarist Tom Linton’s participation will mean that every member of Jimmy Eat World will have performed in a Rock Lottery. Dent and AJJ will also be represented once again, by Jordan Tompkins and Mark Glick, respectively. Nasty Women at the 2017 Rock Lottery.
Michelle Sasonov
Bands who are being represented for the first time include the surf pop group Pro Teens, raucous four-piece Sunday at Noon, and rock quartet Panic Baby. Vocalist and songwriter Raquel Willand of Panic Baby spoke to Phoenix New Times via email about her Rock Lottery debut.

“The Rock Lottery was my favorite show of last year. I was thrilled when Psyko Steve reached out about this year’s event,” Willand says. “It will be exciting to do what I love in a completely different capacity, writing with a bunch of talented musicians all out of their element.”

Chilton is at a loss when predicting what could happen at this year’s event. Sometimes similar musicians all end up in the same band, and it’s striking how well their styles mesh together. Last year, Zachary Zimmerman of country group American Longspurs was paired with legendary pedal steel player Jon Rauhouse, and the match was so natural that they continue to play together now.

Other times, polar opposites are drawn together in combinations that bring out the best of both sides. “Danny from Captain Squeegee, who’s kind of a goofball in a very loving way, was in a band with Ian Metzger from Dear and the Headlights,” Chilton recalls from 2015. “Ian’s a pretty serious guy, and the clash of that was really awesome to watch.”

That unpredictability is what makes the Rock Lottery so compelling for the audience. There’s an electricity in the air, and even though Chilton books more than 400 concerts a year, this remains one of his favorites.

“I’ve never seen a show like that where it’s sold out or basically sold out where no one’s heard the music,” he says. “You kind of just have to see it. This thing happens and then it’s gone. These songs exist for a day and they’re gone. It is an event that there’s only one way to experience it, and that’s being there.”

However the groups are sorted, Chilton says his main advice to the performers is to have fun. He always encourages the bands to do something they would normally never do, perhaps experiment with a style they’ve always thought about but haven’t tried. After all, these songs aren’t going on an album. (Although, in a few rare cases, artists have recorded and released versions of their Rock Lottery creations.)

Since the very first Rock Lottery, all proceeds have benefitted Rosie’s House, a local nonprofit and free music academy for children in low-income households. Funds raised from the event will provide 12 students with guitar lessons, including instruction, a loaned instrument, and performance opportunities.

MRCH frontwoman Mickey Pangburn, who played in 2015, shares Chilton’s sentiment. “If you’re pretty uncomfortable, you’re on the right track,” she says via email. “Also, have a blast! You’re playing tunes and helping out the community.”