AJJ Presents Desert Trash Was a Night to Treasure

Watching one of the guys from Kids in the Hall monkey around with the guitarist from AJJ is all kinds of surreal.

McDonald looks and sounds just like he did back in the day. He still has that high quavering voice, the nervous energy, the bird-like physical frame. He sings songs about being mistaken for Pauly Shore and getting such modest residual checks that he's a "sugar-free sugar daddy" while accompanied by electric guitar.

When it was announced that McDonald would emcee Desert Trash, it was a clear sign that this wouldn't be your typical fest. So many festivals and big bill shows feel impersonal. You can always spot the ones that are lovingly and carefully assembled versus the ones that are thrown together by jacking a handful of band names and EDM acts from a Spotify playlist.
Everything about AJJ Presents Desert Trash had the kind of quirky, personal touch that comes with good curation.

A mini-skate park was set up for a while in the parking lot outside The Van Buren's entrance. There was a pop-up art show inside the venue. A set of white walls displayed old show posters from several of the bands on the bill, AJJ video props, and original artwork.

And of course there was the presence of cult comic McDonald, who delighted and mystified the audience (depending on their age) with his brand of self-aware, self-effacing goofball comedy.

It was also an experiment for The Van Buren. They added a second stage outside, closed down the mezzanine for the night, and added bleacher seating inside the main show room. The bleachers inside were a nice addition, especially on a long night when standing for four hours on end can get wearisome. 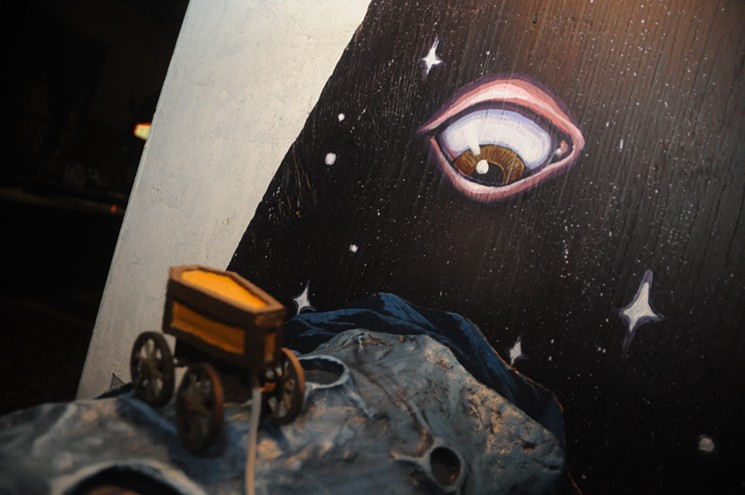 JJ Horner displayed art at Desert Trash.
Benjamin Leatherman
The outdoor stage, while a great idea in theory, wasn't so great in practice.

Kolezanka brought their ghostly dreampop to the outdoor stage. Illuminated by hanging strings of light overhead, they played as the sun set. Like Robin Vining (who would play after them), they were an odd choice to play outside.

The band's music is the aural equivalent of spiderwebs: intricate and beautiful to behold, but incredibly fragile. Surrounded by smokers, folks on their cellphones, and clusters of people having loud conversations, Kolezanka's music was in constant danger of being pulled apart.

Vining had similar problems with his outdoor set. He played compelling music, melodic and heartfelt, on the guitar and on his keyboard. But it was hard to vibe with any of it, given all the chatter happening around him.

People paying $15 to spend a night out not listening to music is nothing new. Music festivals are full of people who go to get trashed, make the scene, and immortalize it on Instagram.

But most festivals are in fairly large spaces that keep those people far enough away from the action to not be a constant nuisance. Because of the relatively small size of The Van Buren's outdoor stage area, there was no escaping the jackholes who were there just to be there.

Although one element that worked like gangbusters with the two-stage setup was the smooth scheduling.

There was practically no lag time between acts. As soon as an indoor performer like Chris Farren or Sundressed would wrap up a set, an outdoor group like Diners or Vining would start to do their thing. It gave the whole evening a feeling of momentum, because there was never enough downtime that the energy in the crowd would have a chance to dissipate.

After getting a gregarious and goofy intro from McDonald, Xiu Xiu's Jamie Stewart comes up and starts playing an electric guitar. Singing an unrecognizable "Fabulous Muscles" with his quivering voice, Stewart was a captivating presence.

Bathed in red light and surrounded by unmanned microphone stands and drum sets, it looked like Twin Peaks super-fan Stewart finally got a chance to do a Roadhouse performance. He even looked the part. With his black shirt, slicked-back hair, and tortured pout, he was basically a goth James.

Lynchian atmospherics aside, Xiu Xiu's set stood out for how uncompromising it was. It takes guts to do a performance as insular and biting as what Stewart did onstage in the middle of a festival where half the crowd is posted up at the bar and shouting over each other. His guitar strums would occasionally turn frantic and violent, his tremulous voice shifting into inhumane screeches and barbaric yelps. It was riveting and beautiful and unpredictable. The jackals howling at the bar were missing out.

Karima Walker played a short but sweetly meditative set on the outside stage. She had a sheet draped over her synth on which she projected images of lights drifting in and out of darkness. Moody celestial images complemented the music. But like with Kolezanka and Vining, the crowd noise made it hard to get fully immersed in her soundscapes. I bet she'd kill at an event like FORM, though. Her music would sound amazing wafting through cypress trees and canyons.

Diners closed out the outdoor stage. Unfortunately, it got so packed and loud that hearing them was a challenge. Even with full amplification, it was like trying to listen to a stereo playing in another room. As much as I enjoy listening to their music, I had to tap out after a couple of muffled numbers. 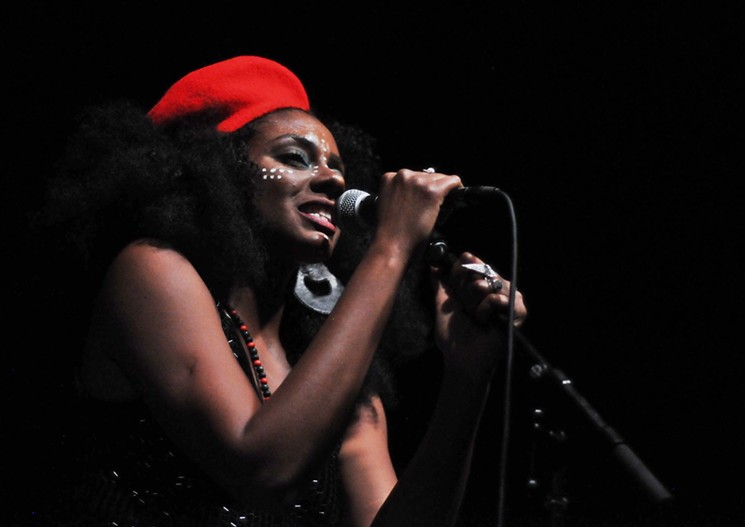 PAO brought the house down.
Benjamin Leatherman
One group that had no problem with overcoming audience noise was the 16-strong Phoenix Afrobeat Orchestra. They brought the house down inside The Van Buren with a funky, propulsive set. Wearing a military jacket and a bright red beret, PAO lead singer Camille Sledge was the most striking person to hit either stage all night long. The band tore through their set, blending Fela Kuti and Talking Heads circa Stop Making Sense. They played roof-tearing horn solos and charmed the crowd into dancing with dexterous poly-rhythms and chicken-scratch guitars.

PAO put on such a dynamic show that few bands could hope to follow. One of the few acts that can manage such a feat were our hosts for the evening: hometown heroes AJJ. After getting a sweet intro by McDonald, who talked about how he was such a fan of their work that he ended up becoming email pen pals with the band, AJJ came out and the room collectively lost its shit.

Sean Bonnette of AJJ at the band's inaugural Desert Trash party.
Benjamin Leatherman
Opening with "White Worms," AJJ played the song like it was their first time doing it. The crowd responded to that passion by moshing, dancing, and pogoing like delightful spazzes.

AJJ have come a long way from their days as a two-piece. While the band's sound has expanded with the addition of multiple guitars, keyboards, drum, and cello, they still have that caffeinated busker energy that made them folk punk champs.

The band played songs from across their catalog: "Heartilation," "Kokopelli Face Tattoo," "Back Pack," "Coffin Dance," "Love Will Fuck Us Apart," "American Tune," and so many other classic AJJ joints. And while AJJ's five-man team may have seemed puny numbers-wise compared to PAO, they didn't need more bodies up there.

With so many singing along from the crowd, it was like AJJ's roster had expanded to encompass the entire room.

The Crowd: Skaters, crusties, teen punks, record store employees, rockabilly librarians, girls in corsets who looked like they got lost trying to find a Jane Austen fan convention, and old-school Trunk Space regulars. It was a super diverse audience, and it was pretty obvious that 80 percent of them were unabashed AJJ stans.

Overheard: “Who is this guy?!” Hearing teens and 20-something audience members grumble this question whenever Kevin McDonald was onstage made his whole self-effacing “I’m a minor celebrity! I’m that guy from that thing you saw!” comedy routines even funnier.

Random Notebook Dump: I hadn’t eaten any of the food at The Van Buren until tonight. The verdict? Those BBQ jackfruit sliders are legit. And speaking of things that are legit: If there's any justice in the universe, David Byrne will get PAO to open for his show in April. They'd be a match made in groovy heaven.