Alice Cooper's life and work are getting the adult coloring book treatment. Jim Louvau
Adult coloring books are still a thing, and one coming out later this month will appeal to the shock rock crowd.

Rock N Roll Colouring, a U.K. outfit that puts out officially endorsed books by bands like Judas Priest and Motorhead, will release The Official Alice Cooper Colouring Book on August 27. 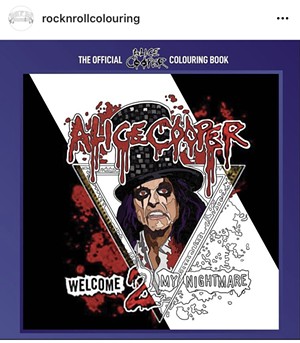 A preview of the Alice Cooper coloring book being released at the end of August.
Rock N Roll Colouring
The book will feature 25 drawings to color that celebrate the life and work of Cooper, a longtime resident of Phoenix. Sneak peeks on the company's Instagram account shows pages based on classic songs like "School's Out," an image of Cooper as mythological figure Medusa, and more.

The book may be available on Amazon when it's released, but in the meantime, bookmark Rock N Roll Colouring's Etsy page (they ship to the U.S.).