Get ready to celebrate Cinco de Mayo in the Valley. Benjamin Leatherman
Given Arizona’s close proximity to Mexico, Valley residents get to experience Latino culture in one form or another nearly 365 days a year. But things are going to get really amped up during Cinco de Mayo.

Numerous bars, clubs, and drinkeries around town will mark the occasion, whether it's offering deals on cerveza and tequila or throwing massive fiestas in their parking lots with DJs, bands, and live entertainment. There will also be a handful of special concerts happening during the holiday, including performances by a pair of acclaimed mariachi ensembles.

We’ve put together a selection of the biggest and best Cinco de Mayo celebrations and music events in the Valley that will take place from Thursday, May 5, through Sunday, May 8.

7330 North Dreamy Draw Drive, 602-944-1286
Arguably one of the most raucous Cinco celebrations in the Valley unfolds every year at Aunt Chilada’s. This year’s event happens on Thursday and will feature a performance by the Guadalajara Dancers at 3 p.m. and music from the Chris Parker Project at 6 p.m., as well as giveaways, food and drink specials, and appearances by the Corona girls all evening. Doors open at 10 a.m. There's a $10 cover starting at 2 p.m. Proceeds benefit the McKenna Youth Foundation.

130 East Washington Street, 602-821-8569
The folks behind the weekly Allstar Thursdays 2.0 event are bringing in rappers Boss Fetti and Dayo G for "Cinco de Drinko" party. Both will perform during the affair, which kicks off at 9 p.m. DJs Kamhicks, Holdem, and Tyco will also be serving up hip-hop, R&B, classics, and reggae cuts. Get there before 11 p.m. for free admission and drink specials like $3 Don Julio, Corona, and margaritas. There's a $10 cover after 11 p.m.

1 Legacy Drive, Mesa, 480-353-7058
The "Cinco Mas Dos" outdoor festival on Saturday, May 7, will offer live music from local country artist Harry Luge and a mariachi band, a “Corona Cantina,” piñatas, and a “Sombrero Flip Chip” and other games. The event’s hours are from 5 to 9 p.m. and its free to attend.

4747 East Elliot Road, 480-753-4733
Latino band El Regreso will get culos moving on the dance floor during the Cinco celebration at Cactus Jack’s starting at 7 p.m. Food and drink specials will be available throughout the evening. Admission is $10. 7320 East Indian Plaza, Scottsdale, 480-361-3440
Casa Amigos is planning a four-night fiesta from Thursday, May 5, to Sunday, May 8. Hip-hop superstars and other special guests will host each night, including Juicy J on Thursday and Twista T on Sunday. Call for more details.

1958 South Greenfield Road, Mesa, 602-575-3180
Dos Gringos will host three straight days of music, food, and festivities during its "Fiesta de Cinco" celebrations, which start on Thursday, May 5. Beer girls will make appearances each and giveaway drinks and swag. Local bands, musicians, and DJs scheduled to perform include Herb 'N' Life and The Black Bottom Lighters on Thursday; Wade Cota, Street Urchinz, and Fayuca on Friday, May 6; and Miles to Nowhere, The Aggrolites, and Fat 'n' Tan on Saturday, May 7. The full lineup and more details are available here. Hours are from 11 a.m. to 11:30 p.m. Daily general admission is $10 and VIP tickets are $50.

9118 West Van Buren Street, Tolleson, 623-478-7300
The annual Fuego de Mayo celebration on Thursday will feature local band Powerdrive playing funk, soul, and old-school starting at 8:30 p.m. DJ AL3 will also be in the mix throughout the evening. Doors open at 5 p.m. and there's a $15 cover.

9600 West Sportsman's Park South, Glendale
This indoor-outdoor event space next to State Farm Stadium will host a Cinco de Mayo party on Thursday with $2 tacos, $3 margaritas, games, and live music. Hours are from 5 to 9 p.m. Admission is free. 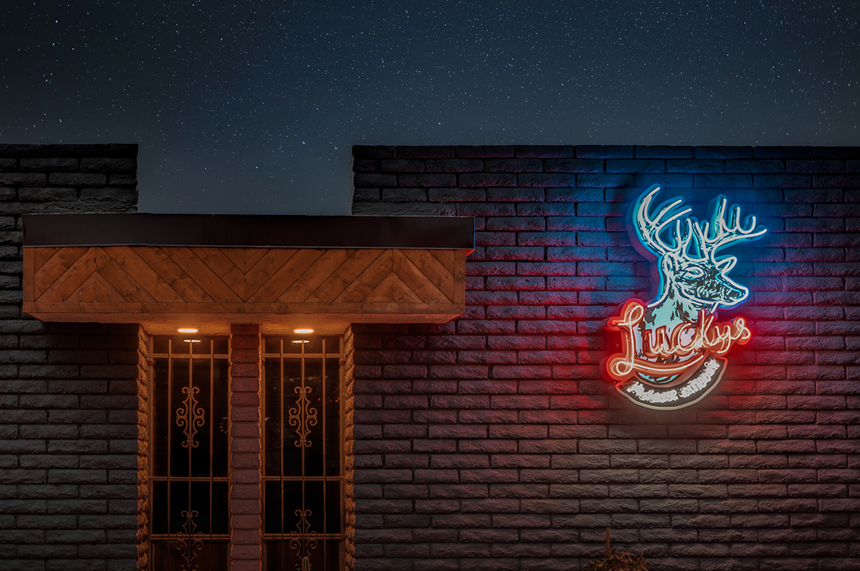 817 North Second Street, 602-975-8156
The Cinco de Mayo fiesta at Luckys will offer $8 specialty margaritas and $6 Modelo and house margaritas from 4 to 7 p.m. There will also be chicken, pork, veggie, and specialty birria arepas from MozzArepas in the food trailer. Live music starts at 6 p.m. Admission is free.

Madison Center for the Arts 4725 East Mayo Boulevard
Spend your Cinco de Mayo being serenaded and entertained by the musicians of the all-female Mariachi Reyna de Los Angeles, which has been charming crowds worldwide since 1994. They’re scheduled to perform at the MIM’s Musical Theater at 7:30 p.m. on Thursday. Tickets are $49.50 to $65.50.

50 North Central Avenue
The "Cinco in the City" block party will takeover Renaissance Square in downtown Phoenix on Thursday night and feature headlining sets by electronic dance music DJs Noizu and Biscits. The event runs from 6 to 10 p.m. General admission is $32 to $42.

4245 North Craftsman Court, Scottsdale, 480-331-9190
Roger Clyne and the Peacemakers will headline a two-day Cinco de Mayo blowout at Rockbar on Thursday, May 5, and Friday, May 6. Expect to hear RCPM’s greatest hits and crowd favorites (including “Banditos,” “Mekong,” and the theme to King of the Hill) during the rowdy gigs, which are also likely to feature Clyne’s Mexican Moonshine available for purchase. The parties are from 6 to 11 p.m. each night. Friday is sold out but tickets are still available for Thursday’s gig and are $35.

9397 East Shea Boulevard, Suite 115, Scottsdale, 480-661-5463
This Scottsdale spot has transformed its bar area into a Cinco de Mayo pop-up complete with colorful decorations and piñatas. A massive party will also take place on Thursday and extend into the parking lot. Live music, outdoor bars, and an appearance by a Selena impersonator are promised. They’ll be open from 11 a.m. to 10 p.m. 6751 North Sunset Boulevard, Glendale, 623-772-7282
Can’t get into Snow Tha Product’s sold-out show on Thursday at the Van Buren? The Mexican-American rapper is also scheduled to appear at Salt’s Cinco de Mayo party following her concert. The 21-and-over event starts at 9 p.m. and admission is $20.

710 West Montecito Avenue, 602-283-4621
Thunderbird’s patrons can win more than $300 in cash and prizes on Cinco de Mayo while playing games of Lotería. The Cultivo Mercado pop-up market will also be set up on the outdoor patio. Games start at 8 p.m. and it's free to play.

4921 East Ray Road, Unit 103, 480-999-0096
Patrons of Wicked can partake in an all-day celebration that will include a special food and drink menu and live music from local band Calico from 6 to 9 p.m.
KEEP PHOENIX NEW TIMES FREE... Since we started Phoenix New Times, it has been defined as the free, independent voice of Phoenix, and we'd like to keep it that way. With local media under siege, it's more important than ever for us to rally support behind funding our local journalism. You can help by participating in our "I Support" program, allowing us to keep offering readers access to our incisive coverage of local news, food and culture with no paywalls.
Make a one-time donation today for as little as $1.