Get ready for another flea market at Yucca Tap Room. Lauren Cusimano
Live music is a huge part of what makes metro Phoenix such a vibrant and exciting place. Here are a few places we like to go to catch a concert, as originally published in our Best of Phoenix 2021. 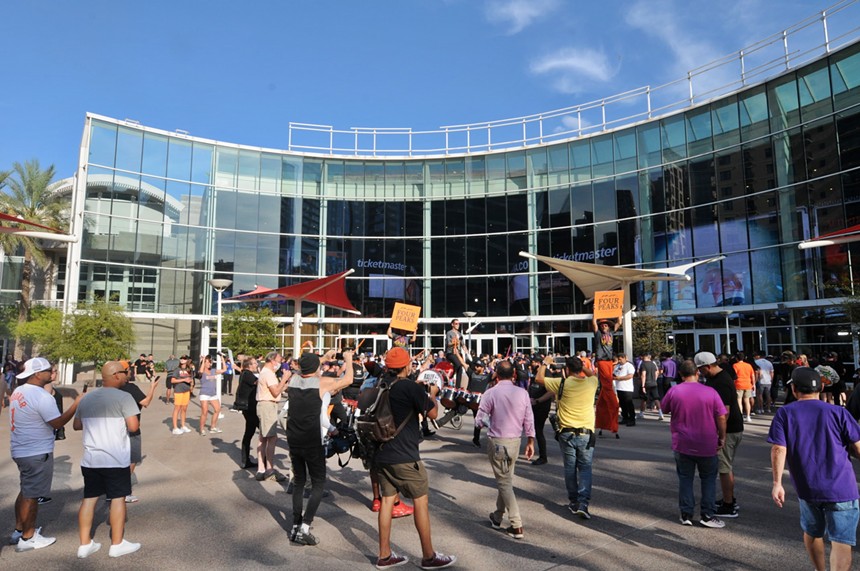 Footprint Center
It can be a challenge to keep up with the stadium's name changes, but whether it's called America West Arena, US Airways Center, Talking Stick Resort Arena, Phoenix Suns Arena, or now, Footprint Center, there's no place we'd rather see a big show. This year, downtown Phoenix's biggest indoor sports and concert event center finally got a makeover to match its many moniker changes; the $230 million renovation completed in early 2021 includes new suite levels, more comfortable and sleek black pleather seats, a family-friendly food hall on the upper concourse, a state-of-the-art sound system, and new video screens. With a capacity of more than 18,000, it's the best place to see the biggest national and international touring acts, from The Eagles and Guns N' Roses to Twenty One Pilots and The Weeknd. The Van Buren is a fixture of the downtown Phoenix music scene.
Benjamin Leatherman

The Van Buren
We like to think about the days when The Van Buren was a car dealership. Could the owners of the Phoenix Motor Company ever have imagined that many decades later, their building would be one of the best music venues in the bustling metropolis of Phoenix? There's no trace of The Van Buren's former life when you walk into the building for a show, just chandeliers, desert murals on the walls, and space for about 1,800 concertgoers to rock out to local acts like Playboy Manbaby and Phoenix Afrobeat Orchestra as well as national ones like Gogol Bordello, Lord Huron, and Cold War Kids. We like the sense of space at The Van Buren; both the outdoor patio and the indoor area near the bar are roomy and open, perfect places to see and be seen. In 2021, car dealerships are a dime a dozen. We're glad The Van Buren got the concert venue upgrade.

Yucca Tap Room
So here's what we love about Yucca Tap Room, a fixture of the Tempe music scene since the '70s: The bar draws local and national acts in all genres — in the space of a week, you could catch a touring punk band, nervous locals at an open mic, a metal showcase, and some Tempe desert rock. Show up a couple of times, and you'll get to know the staff and the regulars, ensuring that there'll be a friendly face or two any time you go. Drinks are cheap and strong and the bartenders keep them flowing. And when you need a break from the musical onslaught, you can step over to the lounge side of Yucca, where you can take a breather and grab a bite to eat (we like the gold wings and the bulgogi bao).

Old Town Tavern
We really are #blessed to have so many places in the Valley to get out and see live music, but one of our favorites is a bar that just doesn't get enough love (in our opinion). Old Town Tavern is tucked away in central Scottsdale, and on most nights of the week, you can walk in and catch an intimate set by some of the city's best musicians. Pistoleros alum Mark Zubia and Gin Blossoms guitarist Jesse Valenzuela are regular performers, as are Corey Gloden of Wyves and local music legend Shawn Johnson. Old Town Tavern's small interior puts you up close and personal with the musicians, and the bar has a tight-knit community of patrons that will make you feel like one of the gang.

Marquee Theatre
It's just our opinion, but we like to listen to heavy metal in a spacious atmosphere, one where the raucous drum solos and guitar shredding can echo off the rafters. Marquee Theatre's high ceilings and concrete floors make for an almost industrial atmosphere, one that pairs perfectly with the intensity and savagery of metal. English band Cradle of Filth plays here, as does Great White and Steel Panther. Marquee is also a frequent host of metal tribute bands such as Noise Pollution: The AC/DC Experience and The Iron Maidens. We recommend you get to Marquee early to carve out your own little space to head-bang at our local Metaldome.

Westside Blues & Jazz
The west Valley isn't exactly known for being a blues hotbed. A few scattered places in the area have hosted jam sessions or occasional one-offs by musicians, sure. But a venue dedicated to showcasing the genre and its artists on that side of town hadn't been tried until Cindi Jackson and Paul Vincent Perez opened Westside Blues & Jazz at the Glendale Market Square shopping center in April. The retired couple, both longtime worshippers of the blues, built the club as a temple to the art form, with great acoustics, plush seating, and speakeasy decor. Their faith in the project, which cost an estimated $500,000 to create, was shaken when COVID-19 delayed its debut for an entire year. Once opened, though, it became a hit. Local blues/R&B greats like Lucius Parr, Francine Reed, and Big Pete Pearson have frequented the stage, as have such jazz scene mainstays as Delphine Cortez, Sandra Bassett, and We3. It's even gotten a thumbs-up from local blues guru and Rhythm Room owner Bob Corritore. High praise indeed.

Chopper John's
There's a lot to see at Chopper John's, from the lineup of hogs outside (it is, of course, a biker bar at heart) to the dollar bills stapled all over the ceiling and the band memorabilia on the walls. But the main attraction is whoever's on stage, which is often one of Phoenix's beloved punk bands. We've caught The Posters here, along with JJCnV, Some Jaywalkers, and plenty of others. Other genres are often on display here, too — most notably rockabilly, trash-a-billy, and the like. If you're looking for cheap drinks and a lively crowd while listening to loud, fast, angry music, Chopper John's is your spot.

Aura
Like other local music scenes, live hip-hop in the Valley took a hit last year when the pandemic forced gigs to go virtual or evaporate altogether. Once crowds could attend shows again, hip-hop promoters, artists, and fans flocked to Aura in Tempe. The 9,500-square-foot Mill Avenue club has become a go-to spot for the genre. Why? Its amenities are conducive to the needs of the scene: The large main room can host superstars like Wifisfuneral one night or work in tandem with a side stage in Aura's lounge for local mini-festivals the next. Its bookers work with promoters both small and large (Justus Samuel of Respect the Underground swears by the place). The top-notch sound system means you can hear every bar being uttered, even if it's a mumbling SoundCloud rapper on the mic. And, unlike other local venues looking to maximize liquor sales, Aura will sometimes run all-ages shows. Younger fans can get a taste of the fun while teenage performers get the opportunity to shine, like when 17-year-old Phoenix rapper Xander (a.k.a. XaniMonsta) brought the place down in August.
KEEP PHOENIX NEW TIMES FREE... Since we started Phoenix New Times, it has been defined as the free, independent voice of Phoenix, and we'd like to keep it that way. With local media under siege, it's more important than ever for us to rally support behind funding our local journalism. You can help by participating in our "I Support" program, allowing us to keep offering readers access to our incisive coverage of local news, food and culture with no paywalls.
Make a one-time donation today for as little as $1.