Lindsey Stirling returns to the Valley to celebrate the opening of Bell Bank Park in Mesa. Sydney Takeshta
This weekend’s slate of concerts and music events will include both unique experiences and opening celebrations.

In the case of the former, you’ve got the annual Phoenix Rock Lottery (which involves more than two dozen local musicians being mixed and matched into new bands) and a karaoke dance party hosted by indie rocker Robbie Pfeffer and singer-songwriter Sareena Dominguez. Meanwhile, outdoor concert venue Bell Bank Park in Mesa and midtown Phoenix blues/R&B club Chars LIVE will both make a debut.

Other highlights of this weekend’s concert calendar include the first-ever Arizona Goth Festival being staged and performances by jazz singer Karrin Allyson and electronic dance music trio Keys N Krates.

Read on for details about each of these gigs or click over to Phoenix New Times online concert listings for more live music happening this week. Keep in mind, though, COVID-19 and its Omicron variant are still prevalent right now and most local venues are requiring proof of vaccination or a recent negative test result to attend.

Violinist and vocalist Lindsey Stirling, a onetime resident of Arizona, is the greatest musician in the narrow genre of classical/dubstep/hip-hop/Celtic folk. She’s been a force to be reckoned with for more than a decade now, releasing multiple hit albums, selling millions of copies, and selling out venues worldwide. Stirling brings excitement to each track while moving with grace and earnestness while onstage, her bow flying across the strings to provide melodies over electronic backbeats. Her intensity is infectious. And it is impossible not to get caught up in the spectacle. Stirling returns to her hometown on Friday, February 4, to celebrate the grand opening of Bell Bank Park, 1 Legacy Drive in Mesa. Her performance starts at 8 p.m. and tickets are $45 to $99.50. Taylor Gilliam

You want to go do karaoke. You want to hang out at one of the hipper venues in town. These goals don't always align, but they will on Friday, February 4, when Crescent Ballroom, 308 North Second Avenue, presents Sareena & Robbie's Karaoke Dance Party. Your hosts, Sareena Dominguez and Robbie Pfeffer (of Playboy Manbaby/TikTok fame) will present an evening of low-key karaoke fun in Crescent’s lounge. The list of 200 or so song options will be available in a binder at the event and special guests from the local music scene will be featured. Karaoke gets going at 10 p.m. There's no cost to attend, but you've got to be 21 or over to show up. Jennifer Goldberg

A wall of vintage LPs inside Chars LIVE.
David Cameron

Famed midtown Phoenix bar and music venue Char’s Has the Blues has been transformed into Chars LIVE. This weekend, the 2,245-square-foot business along Seventh Avenue south of Camelback Road, which sports a renovated interior and exterior to go along with its updated name, will make its return. A longtime live music staple, it hosted local musicians and bands within its dimly lighted interior multiple nights a week as patrons would crowd into the bar’s darkened interior to drink, dance, or soak up the retro vibes. Chars co-owner David Cameron says the spot will continue to book some of the same local bands and musicians who regularly gigged there during its Char’s Has the Blues days. Such will be the case this weekend, as R&B act Soul Power will perform at 9 p.m. on Friday, followed by a set by blues icon Big Pete Pearson at 9 p.m. on Saturday, February 5. Benjamin Leatherman

An Israeli native who spent his childhood in France before moving to London, house artist Mika Abadie (better known as Born Dirty) burst into the electronic dance music world just a few years ago and almost immediately caught the attention of some of the industry's leading labels, such as Mad Decent, OWSLA, Fool’s Gol, and Dirtybird. Abadie has also played at the world's greatest festivals, including Lollapalooza, Electric Daisy Carnival, Shambala, and Splash House. He’ll take over the sound system at Shady Park, 26 West University Drive in Tempe, on Saturday, February 5. Local openers include Medicine Mike and Richi Savage, who will perform a back-to-back set. The music starts at 9 p.m. and admission is $17. David Fletcher 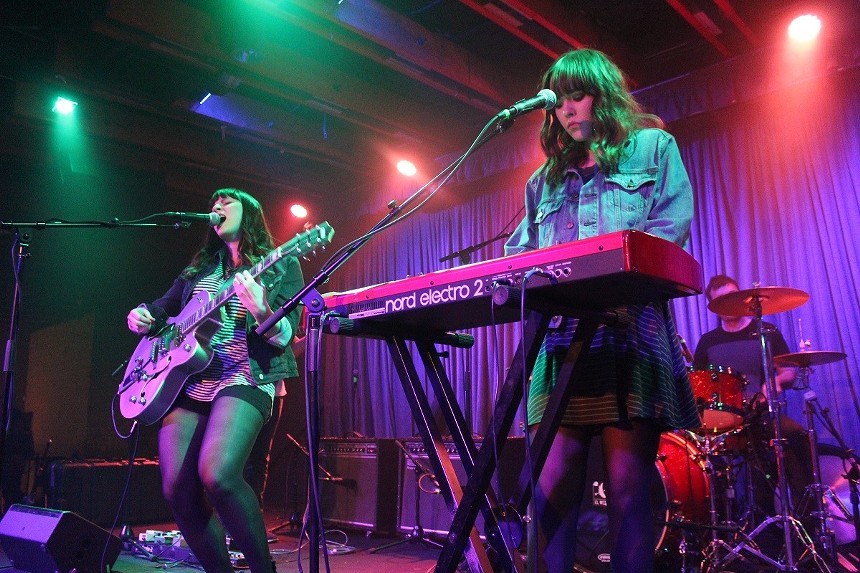 A scene from the Phoenix Rock Lottery in 2017.
Michelle Sasonov

This weekend, more than two dozen local musicians come together at Crescent Ballroom, 308 North Second Avenue, to offer an embarrassment of musical riches. Launched by Stephen “Psyko Steve” Chilton in 2014, the Phoenix Rock Lottery shakes up the local scene for a good cause. All proceeds go to Rosie's House, a nonprofit that provides music education to underprivileged youth from low-income backgrounds. The format offers music fans a wildly unpredictable experience. Artists from different genres and bands are randomly grouped together into five new bands and have until the end of that day to write and rehearse three new songs (and a cover) to perform that night in front of a live audience. This year’s edition includes such names as David Cosme, Nicole Laurenne, Amber Johnson, Michael Coughlin, Megyn Neff, Jim Bachmann, CeCe Oates, Camille Sledge, and Tatiana Crespo. The showcase starts at 8:30 p.m. and admission is $15. Ashley Naftule

This Toronto trio was formed in 2008 and features drummer Adam Tune, keyboardist David Matisse, and turntablist Jr. Flo, all coming together to produce music that’s largely been in the vein of electronic dance music over the past decade (including plenty of trap bangers). With their newest album, 2021’s Original Classic, the trio has shed many EDM tropes while embracing more worldly sounds. As Complex noted last year, Keys N Krates is now “focusing on balmy Brazilian melodies, vibrant Bollywood samples, and other such offbeat elements that should endear them to critics and discerning club crowds rather than the average festival-goer.” Hear it for yourself when they come to Tempe’s Sunbar, 24 West Fifth Street, on Saturday, February 5. Doors open at 9 p.m. and tickets are $22. McWhite, Ico Soundz, and Residuo will open. David Accomazzo and Benjamin Leatherman

This gloriously gloomy celebration kicks off at 5 p.m. on Saturday, February 5, at The Nile Theater, 105 West Main Street in Mesa, and will offer goth goers plenty to do. Vendors will take over the Nile’s basement and upstairs is all about the music, per organizer Ruben Garcia Jr. “We’ve got local legends, The Limit Club, who mix psychobilly, punk rock, and darkwave, as well as newcomers PyG, who do a dark-punk-metal-synth fusion,” he says. DJs will do the entertaining in between bands. “The main hall in the Nile will be switched from concert atmosphere to a dance hall, and we’ll have sets from a handful of local DJs – Apollynon, Mijito, Zander Buel, and Hexmachine – they are the blood of the local goth dance scene.” Admission is $20. Amy Young

In 1992, Karrin Allyson was an unknown jazz singer from Nebraska. Thirty years, five Grammy nominations, multiple world tours, and more than a dozen world tours later, she is regarded as one of the most versatile and talented singers of her generation. Allyson’s vocal range is nearly unmatched in jazz circles, and her masterly inflection has drawn comparisons to Ella Fitzgerald and Shirley Horn. Her live repertoire includes covers of songs by Carly Simon and Joni Mitchell; her recorded material has been equally eclectic. She has covered French and Brazilian music (From Paris to Rio), John Coltrane (Ballads: Remembering John Coltrane), and the blues (In Blue). For local jazz fans seeking a real treat, her concert at 7 p.m. on Sunday, February 6, at the Musical Instrument Museum, 4725 East Mayo Boulevard, is the place to be. Tickets are $35 to $45. Sam Chennault
KEEP PHOENIX NEW TIMES FREE... Since we started Phoenix New Times, it has been defined as the free, independent voice of Phoenix, and we'd like to keep it that way. With local media under siege, it's more important than ever for us to rally support behind funding our local journalism. You can help by participating in our "I Support" program, allowing us to keep offering readers access to our incisive coverage of local news, food and culture with no paywalls.
Make a one-time donation today for as little as $1.