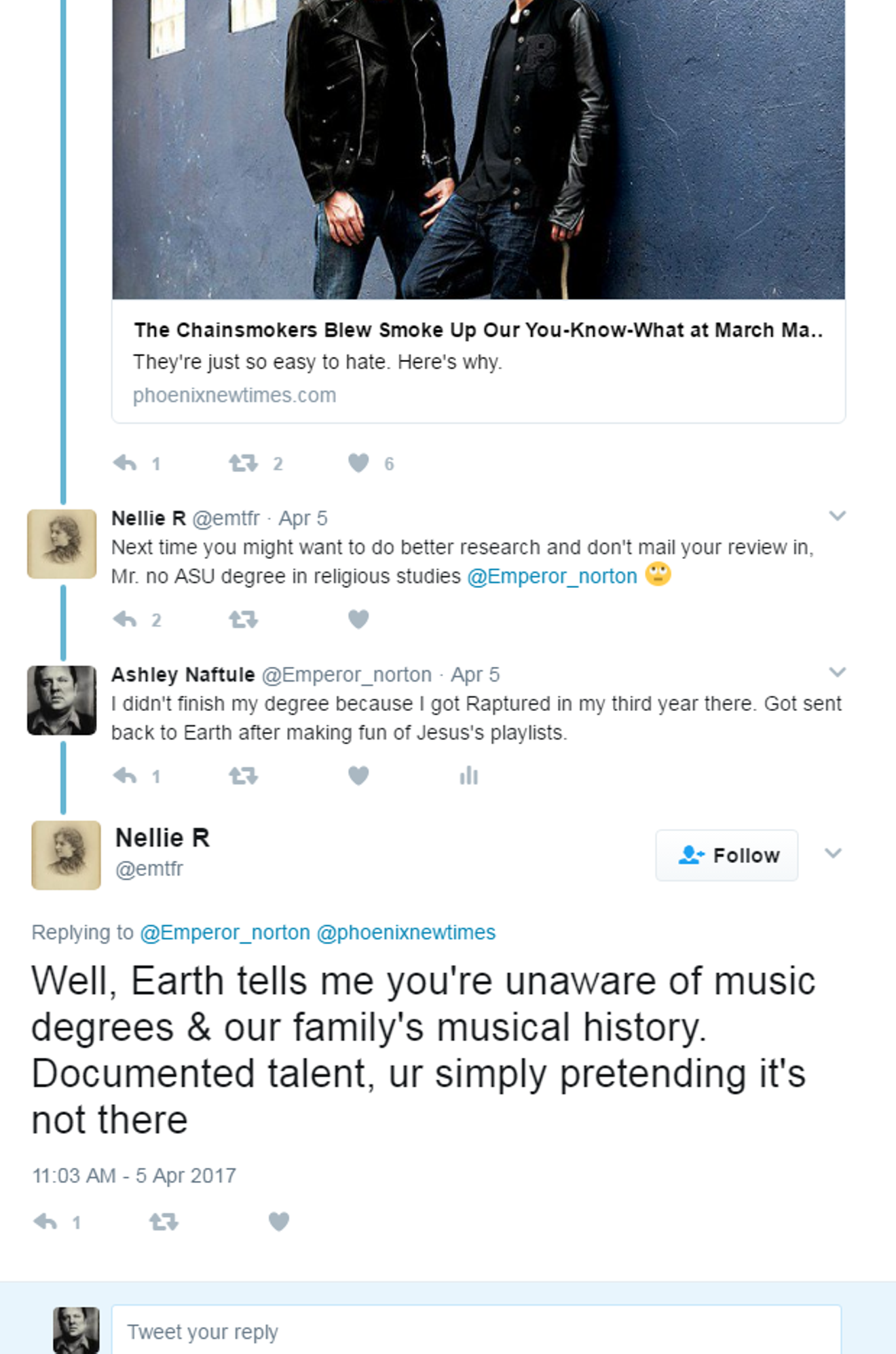 Twitter Screenshot
We're just gonna cut to the chase: Not only are The Chainsmokers untalented as musicians and producers and unpleasant as people, but they don't understand or respect electronic dance music as a craft or culture.

Basically, they're just a couple of poseurs who got lucky. And unlike other mainstream DJs who suck and make a shitload of money off of it, The Chainsmokers are arrogant and actually think that they are clever in how they act and present themselves.

They're a couple of mediocre white dudes who seemingly decided to be in a band to get banged and look cool, not because they have any talent or something to say.

To make things worse, their act is caught between knowing they're a joke half the time, then defending themselves the other half of the time and talking about how they don't care what people think. Even though everything they do seems to contradict that.

Because of all that (and the fact that they're back in the Valley on May 9 to play Gila River Arena), we put together a list of some of things they do and say that irk us the most. Here they are.

The State Farm commercial with their song "Don't Let Me Down."
This could be as much of a dig at State Farm as it is The Chainsmokers. This is basically like the new generation's late-night Sarah McLachlan commercial.

They got their name from "chainsmoking weed."
On an episode of Ridiculousness, Rob Dyrdek asks if they got their name from their "passion for cigarettes." Alex, responds with "no, more weed." Which is somewhat of a derogatory way to reference weed, if you're someone who loves it enough to name your DJ duo after it.

They created punk-rock-style jean jackets as memorabilia to sell.
Not because it has any significance to who they are or that it pays actual tribute to punk rock. Just because it looks cool. Pretty hardcore ...

They keep coming back to Phoenix/Scottsdale.
Aren't there other cities to visit?

They're really bad at doing side planks.

They have a lot to say about nothing.
So many hits, so many shows and videos. Yet, their music just seems to run in a circle around nothing. Do they actually have anything to say? Besides talk about hooking up with old flames or wanting to be like Kanye, we mean.

Pretty much everything happening here.

They are legit the Nickelback of electronic dance music.
Esquire put it perfectly: "The duo brings all the worst cliches of the genre, and just might destroy it."

They say shit like this ...
"My first car was a Subaru." Either they are saying it because they are paid to. Or they are trying to be the cool, ironic guys that don't care about the establishment of the music industry so they say offhand things, even though they are the definition of it. Either way, it's annoying and not genuine. 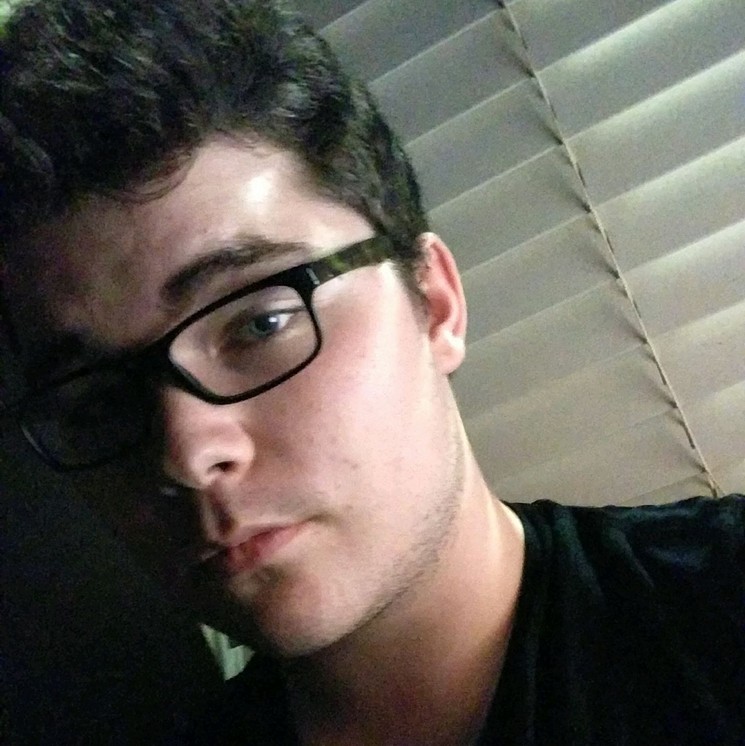 The guy behind the amazing Chainsmokers takedown.
Courtesy of John Fassold
Their music is so simple and terrible that a student broke down their music formula in a series of Snapchat stories. 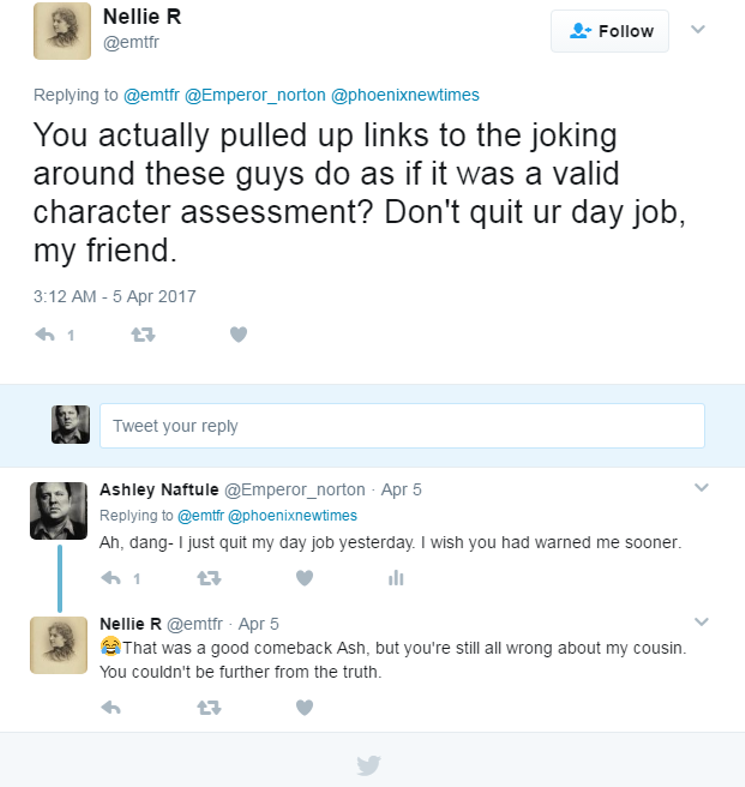 Twitter Screenshot
Their alleged cousin needs to chill.
We guess the "we're just so funny that no one understands us" gene runs in the family. We get that The Chainsmokers are trying to be ironic and funny. But they have to try and they aren't, and that makes them douches.

This speech: "Thank you to the AMAs for bringing electronic music to the forefront. I don't think this genre gets enough credit for what it does for music in general. So shoutout to the AMAs for making this televised."
A. Your music is not a representation of electronic music. B. Pretty sure legitimately talented electronic music producers like Daft Punk, Fatboy Slim, Moby, and Deadmau5 hit in the mainstream before you. C. We would rather electronic music stay in the underground than you be its ambassadors ... Get over yourself.

They are complete assholes when you talk to them.
There are plenty of examples on the internet of the DJ duo being rude, but we actually interviewed the DJs way back in 2014 when they were coming to Scottsdale for the first time. They asked us such questions as "Do you have one leg" and "Are you nervous?" They randomly said "jet-skiing" and discussed plans to debut a "new trick with chainsaws."

When they get an opportunity to show that they might actually be musically talented ... they prove they're not.