A stilt-walker dressed as a ringmaster stomps around the dance floor while a pair of go-go girls dressed in fanciful outfits dance on the bar and costumed characters roam the club.

Over in one VIP booth, a few patrons are enjoying cotton candy or watching an aerialist twist and turn her body atop a silver pole stretching from floor to ceiling.

Similar scenes have unfolded inside of Cirq every weekend since the club opened in late December in the Stetson Drive property formerly occupied by Ellure Lounge.

Joel Borch, one of Cirq’s four proprietors, says the nightclub is inspired by the antics and atmosphere of both Cirque du Soleil and more traditional circuses.
“We’ve got clowns, acrobats, and aerialists doing cool tricks, and all these carousel horses,” he says. “We’ve got people playing on drums whenever the bottle service girls come out with a bottle for someone.”

Over in the nightspot’s side lounge, they’ve also got a supply of wigs, masks, and similar costuming items that Cirq’s patrons can wear while spending a night out at the club.

“People can put something fun on and go out there to their table and just be weird and wild,” Borch says. “We're always trying to figure out a way to make it more circus-y all the time.” 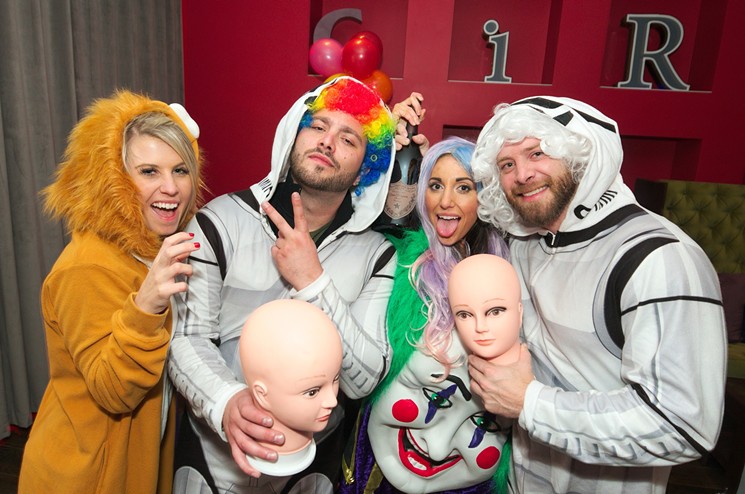 Borch says after considering different concepts for the place, they decided on opening a theme club, something that's become rather scarce in Scottsdale.

Over the last decade, Scottsdale’s entertainment district featured such spots as the medieval-themed Wild Knight, the Washington, D.C.-inspired White House, and tiki bars like Drift Lounge and Trader Vic’s.

These days, however, such spots are a rarity. And Borch feels like Cirq fills that particular niche.

“There isn’t really another theme nightclub in town, so we saw this niche we could fill,” he says. “We were like, ‘Cool, we can do a theme nightclub.’ And it's worked out so far. It’s been packed out since we opened.”

One of the aerialists who performs at Cirq Nightclub.
Benjamin Leatherman
Unlike many other Scottsdale nightspots, which cater to daytime crowds, Cirq is strictly a nightclub. As such, they aim solely at those interested in drinking and dancing.

“Right now, we're bottle service-focused,” he says “We open at 10:30 p.m., so no one's coming in here pregaming. They've probably already had a couple of drinks before they got here, so they're typically ordering vodka tonics, vodka sodas, Moscow mules ... all your usual [call drinks]."

Longtime fans of Cake Nightclub might also see a familiar face or two at Cirq, where the staff includes much of the crew from the now-defunct spot, which shuttered in October. Borch says that Cirq also took a few cues from Cake’s layout and vibe.

“When Cake closed, we were like, ‘Where do we go?’ And when we designed Cirq, we wanted it to be sort of like Cake with the look and feel,” Borch says. “So we saw this opportunity and we got almost the entire support staff from Cake and a couple of bottle girls. And we literally picked up where we left off.”