Musician Harper Lines is running for Tempe City Council. Jennifer Goldberg
Fans of local music already know Harper Lines as the frontman of Harper and the Moths, the popular dance-pop band that's been around for nearly a decade.

But now, Lines, 39, is looking to add a new line to his resume: Tempe City Councilman.

He's no stranger to community service. His endeavors include serving on Tempe's Arts and Culture Commission and volunteering at Camp AZDA, a summer camp for kids and teens with diabetes.

"If you had asked me two years ago if I ever thought I’d run for City Council, I’d have said no," Lines says.

Then, the pandemic hit.

Lines, who works as a community outreach specialist for Sonora Quest Laboratories, applied and was accepted to the Arts and Culture Commission, a volunteer body that, through the Community Services Department, advises the City Council on arts and culture issues.

From that experience, Lines says, he realized he wanted to do even more civic work.

There's a lot involved with trying to get on the ballot. Lines had to file a statement of intent. He had to form his committee. And then there were the signatures.

As Lines explains it, to get on the ballot, he had to get 1,000 signatures from registered voters living in Tempe. In normal times, the requirements are higher, but because of the pandemic, the City Council passed an ordinance to lower the threshold.

Lines estimates he knocked on more than 5,000 doors to get about 1,500 signatures. He invested about 15 to 20 hours a week for four months in the effort.

In November, he was certified to be on the ballot for the March 8 primary election. Ballots were mailed last week. He's one of seven candidates vying for three spots.

Lines, who was raised in Tempe, says "part of the reason I wanted to get involved with City Council is that it gets to vote on development, and that’s future planning. That’s how we envision our city working for not only the next five to ten years, but we’re talking 40 years.

"The core stuff — infrastructure, spending, making sure that our streets are paved, that our water’s secure — is really important to me," he said, adding most Tempe residents care about "affordable housing, homelessness, transportation initiatives, preserving open spaces, and then, of course, energy solutions."

He says he familiarized himself with all these issues by reading Tempe's General Plan.

"I looked at what the experts had to say on the issues we're going to face development-wise in expanding. It's estimated that between 2010 and 2040 we're going to have 55,000 new residents in Tempe. That's a lot, and we can't just keep building up. ... There’s got to be more actionable solutions."

Lines says a good example "is currently what’s going on in the Maple-Ash-Farmer-Wilson area in north Tempe. [The city] is doing an eight-week test with the Transportation Authority to see how to best route traffic in that corridor because there’s so much busy development going on there and it’s impacting the residents."

He points to options like transportation hubs, where motorists could park their cars and access their bicycles from a place where they're securely stored. 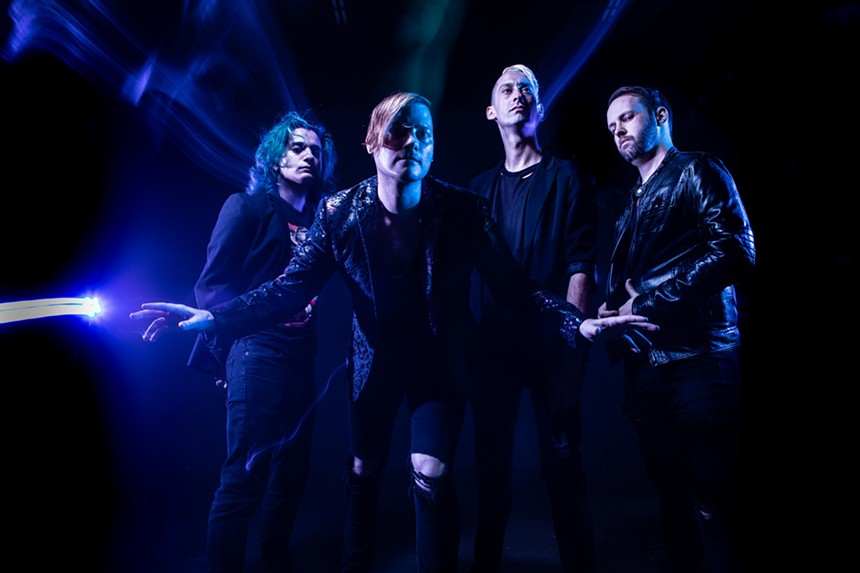 Lines (second from left) with Harper and the Moths.
Jim Louvau

However the election goes, there are big things in store for Harper and the Moths this year.

The band hasn't released an album since 2019's Dark Enough to Dance, but Lines says new music is on the way.

"We’ve been writing nonstop during the pandemic," he says. "We’re trying to come up with hopefully a new EP. We’ve got some songs that we’re excited about, but we’re not in a rush to perform live right now. And we’re reshaping our sound, because we’ve released so much music and played so many shows that we thought it was a good time to take a break and put our energy into stuff we’re excited about rather than just performing live. But you will see us. We will be playing this year."

If Lines wins, he'll have to resign from the Arts and Culture Commission. If he loses, he'll continue to serve the city in that capacity. In either case, he'll be making his community a priority.

"My main focus is just hopefully affecting, in a positive way, outcomes for all residents in Tempe," Lines says.