Your Guide to Memorial Day Weekend 2022 Parties in Metro Phoenix Memorial Day weekend means parties and lot of 'em. Jim Louvau
Memorial Day weekend is typically wall-to-wall with pool parties, club nights, and DJ events. Folks who are up for celebrating and down for anything tend to get out and go hard all three days, whether it means hitting the dance floor at a club or tipping a few back at a lively party or rager.

Such will be the case this year, as the four-day stretch from Friday, May 27, to Monday, May 30, as numerous parties and events are scheduled to go off throughout the metro Phoenix area.

It's also the unofficial kickoff to pool party season, and, as such, venues like Scottsdale's Maya Dayclub and Talking Stick Resort have events planned. Wild Horse Pass Hotel & Casino in Chandler is also getting in on the action and will be launching its monthly summertime Oasis Pool Party series.

Here's the lowdown on what's going on during MDW 2022 in the Valley.
click to enlarge Friday, May 27
Gracie’s Tax Bar, 711 North Seventh Avenue
Gracie’s will take a page from Star Trek: Deep Space Nine and transform into Quark’s Bar in honor of Phoenix Fan Fusion happening over Memorial Day weekend a few miles away. (To be fair, though, we’re sure everyone’s favorite Ferengi would have nothing to do with any establishment with “tax” in its name.) Anyone flashing their Fan Fusion badge can get “con cocktail specials” for half off. There will also be music from Enmeshed and a costume contest with prizes for first, second, and third. Warp over from 10 p.m. to 2 a.m. Admission is free.

Friday, May 27, to Saturday, May 28
Endgame, 1233 South Alma School Road, Mesa
Boba Fett’s seismic charges ain’t got nothing on the thunderous warbles and bass-fueled tracks that DJs will drop during this two-night Star Wars-themed EDM event. More than 40 DJs will blast dubstep, drum ‘n’ bass, jungle, and bass-house from multiple stages, including headliners Synymata and Audioscribe, as well as such locals as BrunchBeatz, Pr!ce, Trentino, Weird Waifu, and Flexstyle. The party starts at 7 p.m. each night. Daily admission is $30 and a two-day pass is $50.

Friday, May 27, to Sunday, May 29
W Scottsdale, 7277 East Camelback Road
The W will be adorned with red, white, and blue decor when it hosts pool parties each day from 11 a.m. to 6 p.m. during Memorial Day weekend. Expect DJs and live music acts, yard games like water pong and cornhole, boozy popsicles, and costumed characters on stilts. Call 480-970-2100 for admission info or text 602-405-0099 to reserve a poolside table or cabana.

Friday, May 27, to Sunday, May 29
Lustre Bar, 2 East Jefferson Street
Hotel Palomar’s outdoor bar and pool will host a three-day celebration with live music DJs after dark, an abundance of cocktails, and “American favorites” being grilled all weekend. Call 602-258-0231 for complete details and admission information. Saturday, May 28
Walter Where?House, 702 North 21st Avenue
Popular art space and music venue Walter Where?House will wrap up its spring with one final blowout on Saturday night. EDM star Mark Farina will spin a blend of downtempo, house music, and “Mushroom Jazz” (which is described as a mix of “West Coast jazzy, organic productions combined with East Coast hip-hop [and] urban beats”). Classic disco ensemble The Sponges will open. Doors are at 9 p.m. Admission is $22 plus fees in advance and $26 plus fees on the day of the show. 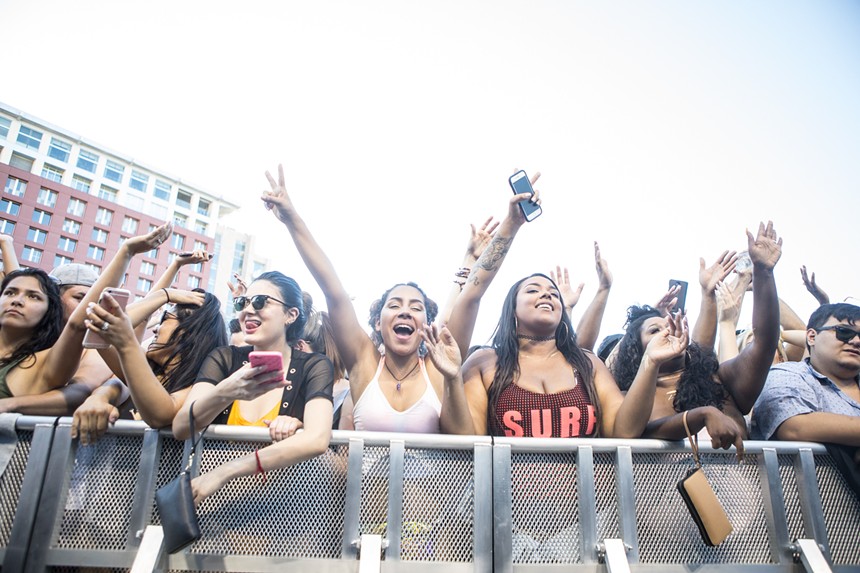 This is what a pool party at Talking Stick Resort looks like.
Jim Louvau

Saturday, May 28, and Sunday, May 29
Phoenix Raceway, 7602 Jimmie Johnson Drive, Avondale
Local promoter Relentless Beats is bringing this two-day outdoor EDM festival headlined by Fisher and Chris Lake back for another year. Expect plenty of beats and bass (as well as a different lineup of openers) each evening with Loco Dice, Anna, Joshwa, and Miane on Saturday night and Hot Since 82, Eli & Fur, Cloonee, and Sosa on Sunday. Gates open at 6:30 p.m. General admission is $52.50 (plus fees) per night or $99.50 (plus fees) for both. Shuttle service is also available from downtown Tempe for $37 per person.

Sunday, May 29
Thunderbird Lounge, 710 West Montecito Avenue
Fans of Cobra Kai (and The Karate Kid franchise in general) will get a kick out of the Thunderbird’s latest theme party. DJs will spin the sort of retro hair metal/glam rock favorites that Johnny Lawrence would dig (including songs from the movies and the show), costumes and ’80s attire are encouraged, and character buttons will be given away to the first 200 people. Patrons can also get a $1 off whiskey and Coors Banquet Beers (try not to hit anyone if you do that bottle-cap flip trick) or participate in Street Fighter II and Samurai Shodown tournaments. Be the best around starting at noon p.m. Admission is free. Sunday, May 29
Maya Dayclub, 7333 East Indian Plaza, Scottsdale
9Maya will host pool parties throughout Memorial Day weekend, including this Sunday afternoon affair with Dutch DJ/producer Afrojack. Expect all the usual trappings of a lively, Scottsdale-style pool party, such as bottle service, pool toys, and rowdy fun. Gates open at noon and admission is $70 plus fees.

Sunday, May 28
Luckys Indoor Outdoor, 817 North Second Street
This laidback 21-and-over affair will feature live music from Rio Grande, plenty of drinks, and food from MozzArepas. A trio of local DJs — Gnarly Brown, Oh Allen, and DJ Soloman — will be in the mix starting at 9 p.m. The party starts at 6 p.m. and there’s no cover.

Monday, May 30
Maya Dayclub, 7333 East Indian Plaza, Scottsdale
The electro/progressive house DJ/producer will help wrap up Memorial Day weekend when he headlines a 21-and-over pool party at Maya on the holiday itself. Gates open at noon. Tickets are $30 plus fees.
KEEP PHOENIX NEW TIMES FREE... Since we started Phoenix New Times, it has been defined as the free, independent voice of Phoenix, and we'd like to keep it that way. With local media under siege, it's more important than ever for us to rally support behind funding our local journalism. You can help by participating in our "I Support" program, allowing us to keep offering readers access to our incisive coverage of local news, food and culture with no paywalls.
Make a one-time donation today for as little as $1.