Our Favorite Metro Phoenix Concerts From the First Half of 2022 We'll always remember 2022 as the year that we got live music back after almost two years of COVID-19. Finally, we were able to return to venues big and small to see our favorite artists.

In just the first six months of the year, we were treated to shows by pop superstars, songwriting legends, and Arizona rock royalty.

Here are a few of our favorites: 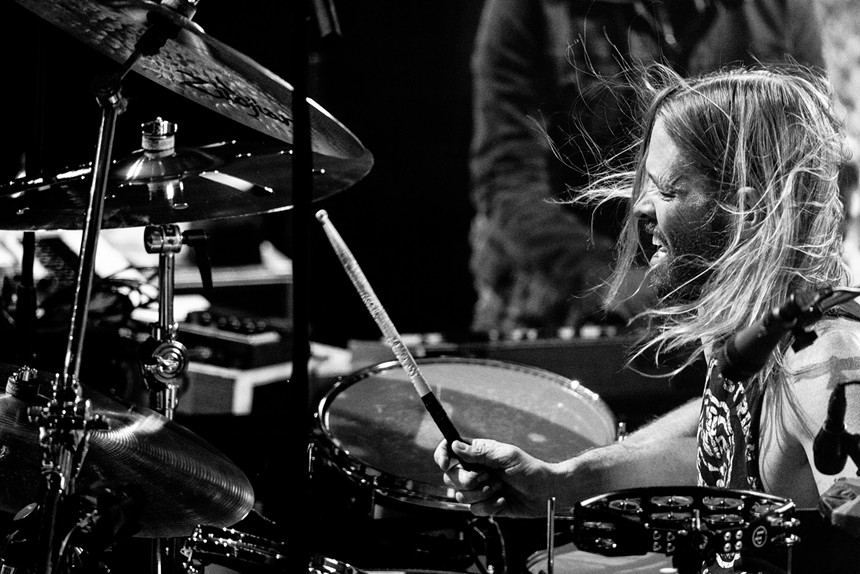 February 26
Innings Festival in Tempe
This one hurts. When Foo Fighters blew the audience's minds as the closing act of the first day of Innings Festival, we didn't know it was the last time we'd ever see drummer Taylor Hawkins perform. But we knew we'd seen something special. The Foos killed it on hits like "The Pretender" and "Learn to Fly," energizing a crowd that had already been on their feet since early afternoon. "The band had the crowd eating out of their hands with every song, and the legion of attendees twisted and turned perfectly with every ebb and flow," we wrote in February. "Is everyone who attended going to be forever changed, altered down to their very last molecule? Maybe. It was that kind of show — it tore down the walls of a great rock concert and made you question the very laws of emotional physics and pure artistry." And then not even a month later, Hawkins was gone, making the Foo Fighters' incredible set loom larger and more bittersweet in the hearts and minds of everyone fortunate enough to be there.

March 3
Arizona Federal Theatre (now Arizona Financial Theatre)
When we excitedly told friends that we'd bought tickets for our first Bob Dylan show, we were surprised at the negativity. "I saw him once and he was terrible," one friend said. "Good luck. Hope you get a good show," said another. But despite the naysayers, the 80-year-old rock legend brought a stellar show to Arizona Federal Theatre. In a voice that was strong and clear as a bell, Dylan entranced the crowd for 100 minutes, mostly with songs off his most recent album, 2020's Rough and Rowdy Ways. ("I Contain Multitudes" and the first live performance of "Crossing the Rubicon" were highlights.) He accompanied himself on the piano, taking only a few pauses to greet the crowd, introduce the backing band, and share anecdotes about hitting the pool at the Arizona Biltmore. We were perhaps a little disappointed that didn't get to hear more classic Dylan tracks, but being in the presence of absolute musical greatness more than made up for it. 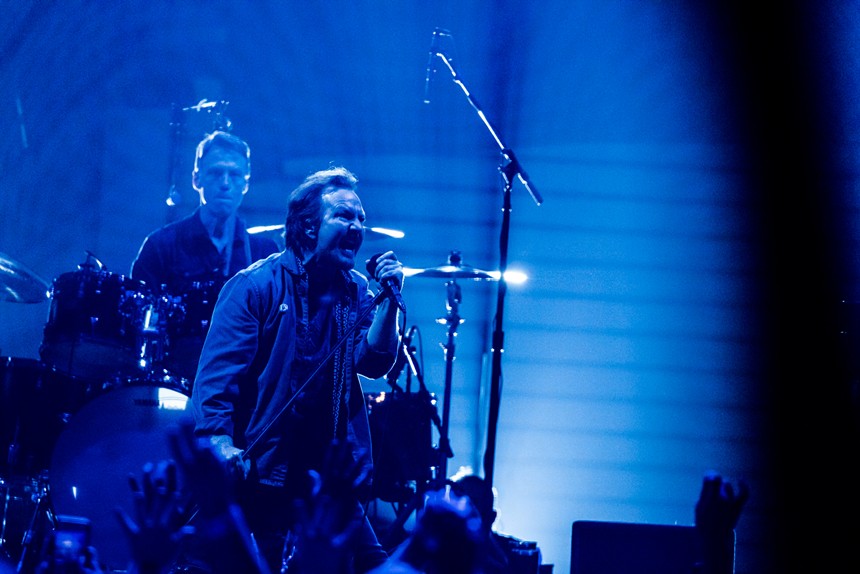 May 9
Gila River Arena in Glendale
Pearl Jam were one of the many musical acts who were supposed to hit town in 2020, only to find their plans delayed for the better part of two years. But the show in Glendale this spring was worth the wait. We met one woman who was seeing the band for the 133rd time, and others who were experiencing their first Pearl Jam concert. But it seemed like everyone was floored by the set at Gila River Arena. A chatty and upbeat Eddie Vedder led Pearl Jam in a 22-song set that spanned the band's career from Ten to 2020's Gigaton. In between songs, Vedder told stories about getting stranded in Yuma, said how happy he was to be back out touring, and advocated for women's rights. Pearl Jam has now been around for 30 years, and there was a distinct sense of nostalgia in the air for the many 40- and 50-somethings in the audience. But it's no small feat to be simultaneously classic and modern, and Pearl Jam pulled it off perfectly in May.

May 12
State Farm Stadium
Concerts, at their best, do more than entertain. When the stars align, certain shows become more than some songs and lights and unite strangers in a room in a moment of beauty and feeling. Coldplay's two-dozen-song set touched on all their most popular songs, from breakout hit "Yellow" to tracks off their latest album, Music of the Spheres. Chris Martin and Co. are an incredibly polished live act, and Martin's cheeky grin and Jagger-esque physicality delighted the audience. The set was so good that we can even forgive a bizarre subplot that included a puppet band performing Coldplay's song "Biutiful." But the thing that made the night were the thick white bracelets handed out to the audience, which flashed in different colors and patterns throughout the show. It turned a stadium show of two hours of favorite songs into a, well, sky full of stars that dazzled everyone in the room and a shared experience that made the return of big concerts even more cathartic. Add in a dynamic set by opening act H.E.R., and you've got a night to remember.

May 17
Arizona Federal Theatre (now Arizona Financial Theatre)
There are a lot of music fans (we can think of a few) who turn their nose up at pop music. Especially pop music made by a young woman. Especially pop music made by a young woman who has become an idol for teen and preteen girls. But at Olivia Rodrigo's May show at Arizona Federal Theatre, we saw something magical happen: We saw the next generation of live music fans come to life. Sure, there was high-pitched screaming aplenty and the fans sometimes sang so loudly we couldn't hear Rodrigo very well, but as a seasoned concertgoer, it was unexpectedly delightful to be around so much uncynical excitement and joy. Rodrigo put on a short but solid show that was mostly composed of songs from her album Sour (Rolling Stone's 2021 Album of the Year, by the way, you pop naysayers), with.a few '90s covers thrown in (No Doubt's "Just a Girl" included). By the time Rodrigo got to her encore number, the blockbuster hit "Good 4 U," we were screaming, too.

June 11
Arizona Federal Theatre (now Arizona Financial Theatre)
When you go to a Puscifer show, you sign up for weirdness, and if you attended the band's Phoenix show in June, it was weirdness you got. From frontman Maynard James Keenan's characters (he performed both as Agent Dick Merkin and, later in the show, as Billy D) to the hilariously awkward video interstitials (one featuring Keenan as Merkin trying to work a Bop It toy), nothing was predictable or boring during the band's set. The band were touring to promote their 2020 album, Existential Reckoning, and most of the setlist came from that album and its otherworldly electronic sound. Keenan and the impossibly cool Carina Round entranced the audience on songs like "Bread and Circuses" and "Apocalyptical." But the most moving moment of the show came at the end, as Round and Keenan crooned "It's gonna be alright / It's gonna be alright / Everything will be alright," the chorus of "Bedlamite." Coming from a figure as compelling as Keenan, we could almost believe the sentiment.
KEEP PHOENIX NEW TIMES FREE... Since we started Phoenix New Times, it has been defined as the free, independent voice of Phoenix, and we'd like to keep it that way. With local media under siege, it's more important than ever for us to rally support behind funding our local journalism. You can help by participating in our "I Support" program, allowing us to keep offering readers access to our incisive coverage of local news, food and culture with no paywalls.
Make a one-time donation today for as little as $1.