A Guide to the Best Jukeboxes in Phoenix

In the hands of a capable coin-popper, an internet jukebox can be a great thing. A little far-out tropicália? That sounds nice. Some classic funk from Parliament? Yes, please. The deep cuts cost more, but can really set the mood.

Though we're not here to put down internet jukeboxes, we will say they rarely bring out the best sounds from a crowd. More often, they enable patrons to quickly hit play on the same shitty shit you heard scanning the radio dial on the drive to the bar.

Which is why we like old-school jukeboxes, the kind that demonstrate and reflect an establishment's taste (or lack thereof). We like jukeboxes stuffed with discs, or at least a well-pruned digital playlist. We like the idea of that glowing box in the corner actually saying something about where you are. These seven metro Phoenix jukeboxes do just that.


The Dirty Drummer had been around for 40 years till it closed in late 2018. In May, the famed Phoenix bar reopened thanks to the efforts of Dana Armstrong, Andrew Smith, and Tom Bernard. The Dirty Drummer definitely got an update while shuttered, but there’s still that classic vibe. Think wooden walls and bar top, amber glass lamps, and a jukebox full of country and classic rock. There’s Ronnie Milsap to Anne Murray, Fleetwood Mac to Jimmy Buffet, Tom Petty to an album with an unrecognizably young Willie Nelson. Special shoutout to Warren Zevon’s “Excitable Boy.” 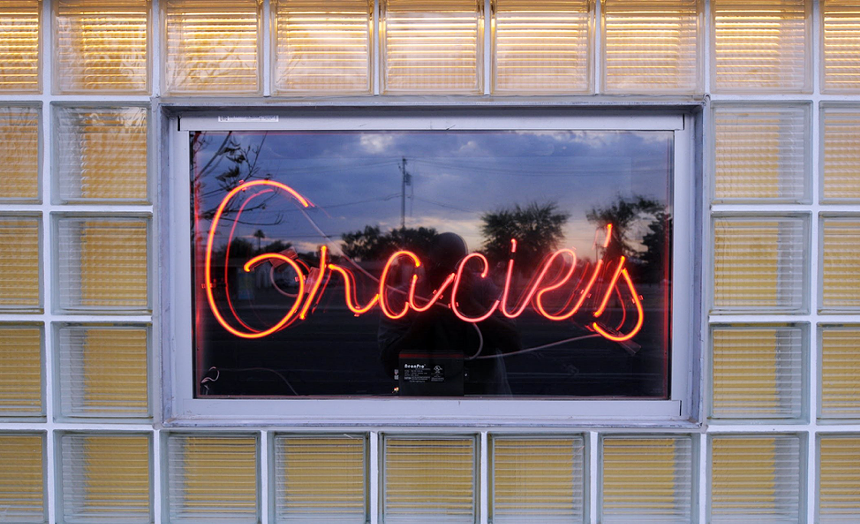 Gracie’s has one of the best jukeboxes in town.
New Times Archive

The jukebox isn't the only draw at Shady's Fine Ales and Cocktails.
Katie Johnson


The two-tone cartoon character on Shady's sign tips nicely to the kind of music that stocks the jukebox: Brit pop, vintage alternative, mod, and punk classics. The unpretentious vibe of the place is well-suited to the sounds, which extend from soulful tunes by Al Green to morose alternative pop from The Smiths. Bonus: Compilations like Legend City and The Soul Side Of The Street (Hot Phoenix Soul Sides From The Vaults Of Hadley Murrell) 1964-1972 offer unparalleled vintage Phoenix sounds.


The Swizz is a neighborhood tavern-meets-dive-bar-meets-happy-hour hangout. Located on the southeast corner of a shopping plaza, Swizzle Inn features one pool table, one dartboard, one themed atrium (depending on the season), one horseshoe bar, and one jukebox. It features CDs befitting the crowd, like Van Halen, Michael Jackson, Willie Nelson, and The B-52s. 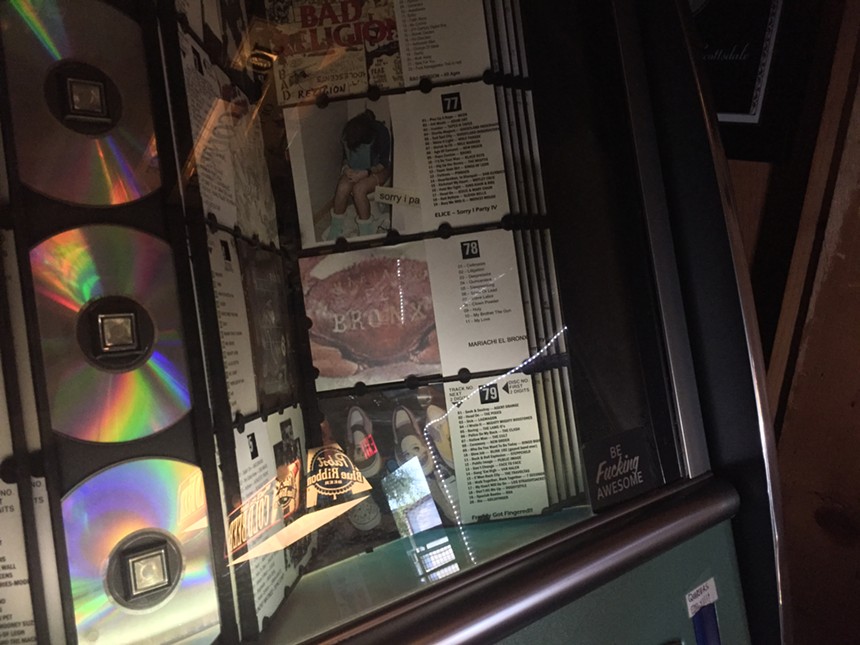 
With its laid-back biker vibe, TT Roadhouse is a nice place to chill. The jukebox is renowned, too, featuring CDs from the Misfits, the Clash, Elvis Costello, and the Specials. Former Arizona show promoter Tyler King once put it best: "[There's] a few hidden gems that you have to be an insider to know the track number. Yes, you can Rick-roll a roomful of weekend warrior bikers." That's our kind of jukebox warfare. The ATM dishes out singles and fives for the jukebox and cigarette machine.
Lauren Cusimano


The three core members behind Thunderbird Lounge spent four hours at Zia Records handpicking CDs for the in-house jukebox. There’s a definite theme: 1970s-era records ranging from pop to metal to country. There’s ABBA and Judas Priest, Elvis Costello and Kraftwerk, Waylon Jennings and Todd Rundgren, and Marty Robbins. The Robbins album, Gunfighter Ballads and Trail Songs, is the only album not allowed to leave the jukebox, as the neighborhood bar was named after the old Thunderbird Lounge in Glendale, Robbins' old watering hole.

Editor's note: This post has been updated since it originally appeared in April 2012. Lauren Cusimano and Jason P. Woodbury contributed to this article.
KEEP PHOENIX NEW TIMES FREE... Since we started Phoenix New Times, it has been defined as the free, independent voice of Phoenix, and we'd like to keep it that way. With local media under siege, it's more important than ever for us to rally support behind funding our local journalism. You can help by participating in our "I Support" program, allowing us to keep offering readers access to our incisive coverage of local news, food and culture with no paywalls.
Make a one-time donation today for as little as $1.
Phoenix New Times
Contact: Phoenix New Times