The Sweetest Gift: Linda Ronstadt Owes Us Nothing 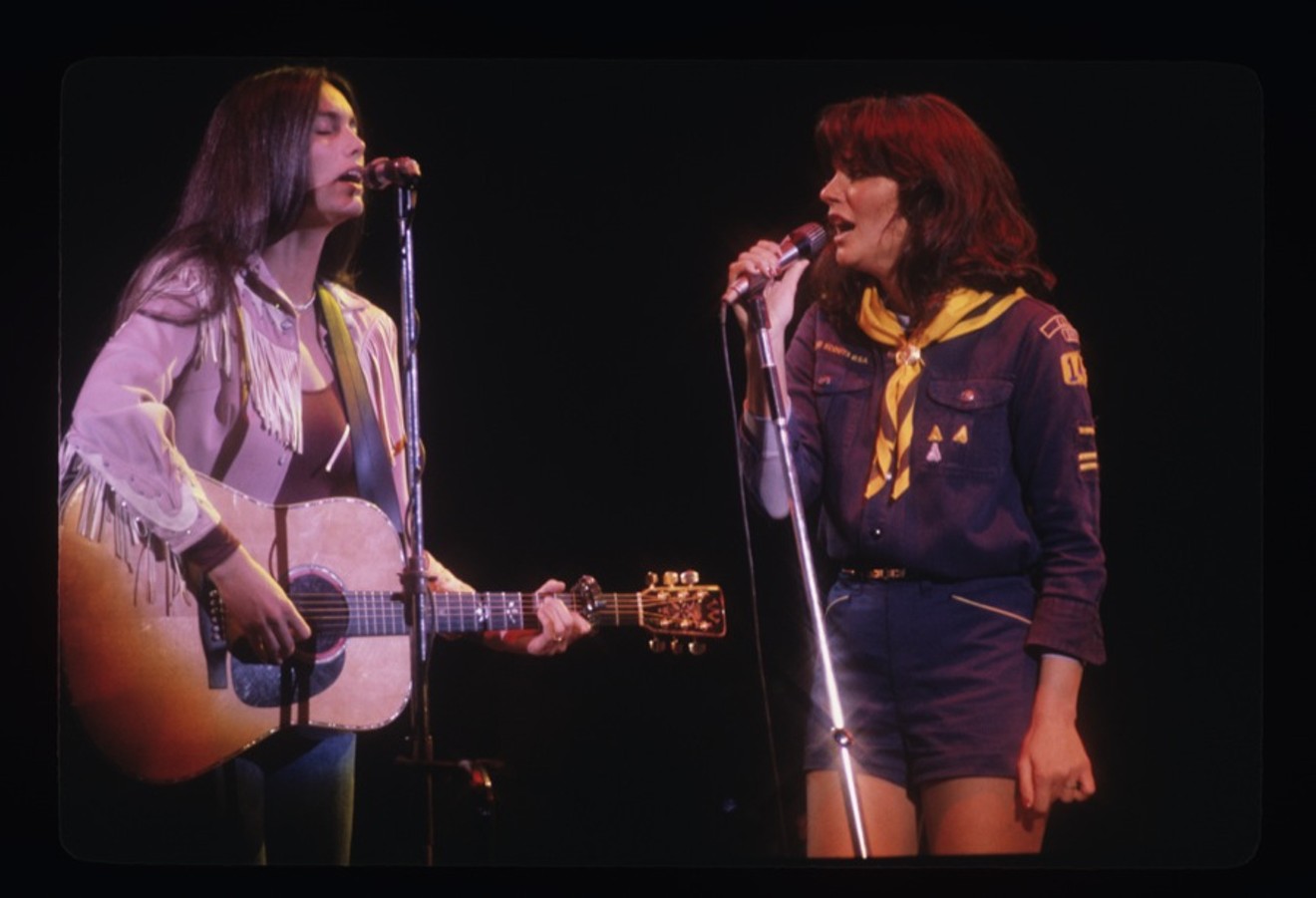 There it is, in several still photos and one grainy clip of Linda Ronstadt performing “Different Drum” at the Bitter End in 1968: the purple-striped nylon Betsy Johnson dress the singer has claimed she practically lived in that year. Casual fans won’t notice or care about this tiny detail in Rob Epstein and Jeffrey Friedman’s dutiful new movie, Linda Ronstadt: The Sound of My Voice — and it’s a movie made largely for the casual fan. Like hundreds of other celebrity documentaries, Sound is a tribute to an icon, told in clips and talking-head interviews with the subject’s famous contemporaries. It’s meant to entertain us and to pay tribute to a remarkable career. It does both in a tight, melodic 95 minutes.

But unlike so many other similar films, its makers — themselves die-hard Ronstadt fans — have wedged in a few nods to those of us who’ve paid closer attention to Ronstadt’s career; those of us who don’t need to be reminded that she had five consecutive platinum-selling albums in the 1970s; that two of her former bandmates went off to form the Eagles; that she retired in 2009 after a rare form of Parkinson’s disease changed her ability to sing.

It’s hard to imagine there’s anyone in America who hasn’t heard that last, sad bit of news. But last year, when Ronstadt was still well enough to travel with her speaking tour, there was at least one person in the Scottsdale Center for the Arts audience who hadn’t.

“I hope she does ‘Heatwave,’” I heard a woman seated behind me say to her companion that night. “Oh, she doesn’t sing anymore,” her friend explained. There was the longest pause. “Then what is she going to do?” came the reply.

She was going to talk about herself, just as she does in this new documentary. That night, and in the new movie, she was as generous with her stories as she’d been back when she could belt her way up a musical scale. And if in the film she tells many of the same stories she’s been telling for years (like the one about how she decided to befriend, rather than envy, Emmylou Harris) and offers oft-repeated opinions (she hated playing arenas, because the guitar solos from last week were somehow still trapped there), there’s plenty of stuff for those of us who can, you know, recite the catalog numbers of each of the three Stone Poneys albums or the release dates of each of Ronstadt’s singles.

A scene from the film Linda Ronstadt: The Sound of My Voice.
Greenwich Entertainment

There is, for instance, a brief alternate take of Ronstadt’s “Rambler Gambler,” a non-album tune that charted at country stations in the late '70s. There’s footage of her performing Fontella Bass’ “Rescue Me” at the Troubadour in March 1971, a cut well known to fans of the singer’s third solo album — but who’d ever seen the accompanying performance clip? And, look! There’s Bobby Kimmel talking about how he and Ronstadt formed the Stone Poneys in 1966 with bassist Kenny Edwards. If you haven’t recently been to McCabe’s Guitar Shop, Kimmel’s Santa Monica, California, performance space, you haven’t seen him in a while. It’s lovely to hear the affection he has for his famous former bandmate.

Epstein and Friedman make a solid case for how and why Ronstadt changed the game for “girl singers,” as they were called then: She insisted on selecting tunes that meant something to her, rather than having pop crap foisted on her by producers and record executives; she sidestepped rock’s boys-only routine, even while fronting an all-male band; she left a major record label in 1973 to join her friends at the fledgling Asylum Records — a ballsy move for anyone, let alone a singer who hadn’t had a hit in four years.

If the filmmakers breeze past or skip over some of the superstar’s achievements, it’s only fair: There are more of them in Ronstadt’s career than in most anyone else’s. If The Sound of My Voice is a love letter to one of pop music’s biggest acts, it’s also a testimonial to what she achieved, and how she did it mostly on her terms. When music scholars find this film in 50 years, that’s what they’ll need to know about Linda Ronstadt.

A scene from the film Linda Ronstadt: The Sound of My Voice.
Greenwich Entertainment

Still, I would like to have known whether Ronstadt cared that her taste in music shaped a generation’s, when she offered us gorgeous recordings of the great American songbook, of mariachi tunes, of Gilbert and Sullivan. I wanted to hear whether she meant to subvert rock ’n’ roll maleness by singing about getting a blow job from Dallas Alice (in Lowell George’s “Willin’”) or pleading with Warren Zevon’s “Carmelita” to hold her tighter. And what exactly does she mean when she claims, in her beautifully written memoir, Simple Dreams, and in several recent interviews, that she can’t sing anything she didn’t hear in her childhood home in Tucson? She certainly didn’t hear The Cretones or Elvis Costello there.

I might have asked the lady herself. The publicist for the film offered to arrange an interview with Linda Ronstadt for this essay, and I declined. I was squeamish about asking someone I have long admired, someone who these days tires easily, who’s sick with something that makes it difficult for her to talk, to indulge my self-interested questions about musical choices she’d once made. I couldn’t offer Linda Ronstadt anything close to the gift she’d given a generation of music lovers, but I could give her one less conversation with some stranger who wanted to talk about a dress she’d worn a half-century ago.
KEEP PHOENIX NEW TIMES FREE... Since we started Phoenix New Times, it has been defined as the free, independent voice of Phoenix, and we'd like to keep it that way. With local media under siege, it's more important than ever for us to rally support behind funding our local journalism. You can help by participating in our "I Support" program, allowing us to keep offering readers access to our incisive coverage of local news, food and culture with no paywalls.
Make a one-time donation today for as little as $1.