The Van Buren opened its doors with a sold-out Cold War Kids concert on Wednesday, August 23.

Operated by Charlie Levy of Stateside Presents in partnership with Live Nation, the 20,000-square-foot venue has several more sold-out shows on its docket. Among them are Sylvan Esso, Lord Huron, and Death Cab for Cutie.

Clearly, Valley music fans have been waiting excitedly for the club to open at Fourth Avenue and Van Buren Street. And that buzzing energy was palpable on opening night.

Like Levy's other venues, Crescent Ballroom and Valley Bar, The Van Buren's more than a space with a sound board and beer.

It's beautifully appointed and designed, from the gray-and-white cement tile in the lobby to the curved wrought iron lining the mezzanine. Exposed block meets glossy white countertops. And in the concert hall, Gary Patch has painted a pair of murals depicting a desert landscape on each side of the sprawling stage.

Cold War Kids took to it with the shake of a tambourine, ready to christen the place.

The California indie act opened with "All This Could Be Yours," leading off a set of soulful rockers that fit sonically between the nasty southern grit of Kings of Leon and the unhinged low-key mania of Modest Mouse. That they sound like the latter isn't so coincidental. Cold War Kids share drummer Joe Plummer with Modest Mouse, and a previous lineup included guitarist Dann Gallucci, who also played in both bands.

Cold War Kids debuted during the early aughts blog band wave with the bluesy 2006 full-length Robbers & Cowards. Though they've earned a dedicated fanbase, the band has drawn fairly consistent criticism. Their lyrics can veer toward silly and maudlin. For instance, the band's breakthrough track "Hang Me Out to Dry" uses laundry as a metaphor for love. There's an insistence that every song be a cranked-up, emotional banger — save for, like, two. Frontman Nathan Willett often delivers lyrics with a demanding howl.

All that's fair. But they're pretty brilliant songwriters.

Cold War Kids' masterful song construction isn't unlike that of The Chainsmokers, the electropop duo who very well might cite the Kids among other blog band influences like The Postal Service or TV on the Radio.

There's the breakdown, build-up, and payoff in perfectly sequenced — albeit repetitive — order. Which isn't to say it's a good or bad approach. Regardless of taste, it yields results in a massive way. Rolling rhythms take charge. If you're willing to relax into the grooves, you don't have to think deeply. You feel them. It's visceral.

During Wednesday night's set, the crowd was feeling it.

Cold War Kids churned through fan favorites spanning the band's career, including "We Used to Vacation" from an early days EP (as well as the opening track on their debut album) and "Love Is Mystical," the lead single off the band's 2017 record, L.A. Divine. Evenhanded selections from Hold My Home, Dear Miss Lonelyhearts, and Loyalty to Loyalty rounded out the setlist.

The band peppered the set with a few unexpected takes, too. A cover of Rihanna's Amy Winehouse homage "Love on the Brain," which the band previously covered with Bishop Briggs, was the most delightfully surprising among them.

At one point, Willett decided to take things down a notch with a solo piano version of "Bottled Affection." The break in big sound revealed a sea of conversation amid the 1,800-person capacity room. He suggested that chatty members of the crowd take a trip to the bathroom.

It was well-meaning but ill-fated advice. Mellowing out the amped audience was a near impossible task. Cold War Kids perform at The Van Buren on Wednesday, August 23, 2017.
Melissa Fossum
Setlist
"All This Could Be Yours"
"Miracle Mile"
"Hot Coals"
"Thunderhearts"
"Louder Than Ever"
"Hang Me Up to Dry"
"Can We Hang On"
"Love Is Mystical"
"Restless"
"Mexican Dogs"
"Lost That Easy"
"Bottled Affection"
"Love on the Brain"
"So Tied Up"
"We Used to Vacation"
"Camera / Hospital Beds"
"First" 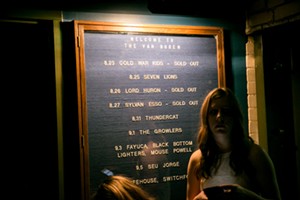 So many sold-out upcoming shows!
Melissa Fossum
Encore
"Audience Of One"
"Something Is Not Right With Me"