Your Guide to Metro Phoenix's Best Halloween Parties in 2021

Halloween parties will be in abundance this year. Benjamin Leatherman
click to enlarge

Halloween parties will be in abundance this year.
Benjamin Leatherman
Whatchu got planned for Halloween weekend? It’s one of the biggest party occasions of the year and there will be plenty of places to wear a costume while having fun.

The hip crowd will be over at Gracie's Tax Bar or The Lost Leaf. Electric dance music fans will be raging away at the Walter Where?House or inside the clubs of Scottsdale and Tempe. And folks with spectacular costumes will be up at Talking Stick Resort trying to win big cash prizes at the Wicked Ball.

We’ve assembled a list of the best parties happening in the nights leading up to All Hallows Eve this years. The biggest bashes will happen on Friday, October 29, and Saturday, October 30, with a few notable affairs taking place on Sunday, October 31.

Have fun, wear a mask, and get home safe.

Local bands will put a twist on the Halloween tradition of becoming someone else during the annual Punk Rock Halloween Bash on Friday, October 29, at Yucca Tap Room, 29 West Southern Avenue. They’ll pay tribute to several iconic bands from the genre (and maybe even copy their looks), including In Memory Of starring as the horror-punks of Calabrese and the members of Morgan's Bluff becoming a hybrid of Dropkick Murphys and Flogging Molly. Other local musicians will join forces to cover 7 Seconds, Blanks 77, Fugazi, and others. Meanwhile, Yucca’s patio will host a “Monster Midway” with a costume contest for prizes and horror-themed carnival games and DJ Vil Vodka will spin in the lounge. The party starts at 7 p.m. and there’s no cover, but
a recent negative COVID-19 test result or proof of vaccination is required.

Walter Where?House, 702 North 21st Street, will host two nights of colorful, beat-filled experiences over Halloween weekend. First up is this high-profile event put on by the Desert Hearts Family (a California-based DJ collective, record label, and party crew) from 8 p.m. to 2 a.m. on Friday, October 29. EDM artists Mikey Lion, Lee Reynolds, and Marbs & Porky will perform. Tickets are $25 to $35 and a recent negative COVID-19 test result or proof of vaccination is required.

A few things are guaranteed to happen during the annual Halloween block party at Giligin’s, 4251 North Winfield Scott Plaza in Scottsdale, on Friday, October 29, and Saturday, October 30, which will extend into the street in front of the bar. There’s gonna be a mix of music, madness, and a little mayhem. Beer tubs and outdoor games like giant Jenga and Connect Four will be available. The costume contest on Saturday night will have prizes for the best male, female, and most offensive costumes. The party goes from 1 p.m. to 2 a.m. both days. Admission is free.

You’ll encounter some of the best costumes in the Valley during the annual Wicked Ball on Saturday, October 30, at Talking Stick Resort, 9800 East Talking Stick Way in Scottsdale, as the event’s payday of $10,000 in cash prizes brings out plenty of elaborate-looking outfits. In addition to all the fantastic costumes, the ball will feature a “shipwrecked” theme and action in three different rooms, each with its own selection DJs. Performers this year will include Hook N Sling, Gattuso and Matoma, and Tino Cochino and 104.7 KISS FM will host the event, which runs from 9 p.m. to 2 a.m. Advance tickets are $50 for general admission and $90 for a VIP package. Call 480-850-7734 or see here for additional details.

A Nightmare on Mill Street at Aura

Freddy Krueger may or may not be in attendance at this themed hip-hop event on Saturday, October 30, at Aura, 411 South Mill Avenue, #201, in Tempe. A huge lineup of local rappers and DJs will perform, including DeLa Preme, COE Yante, Noah Kenobi, Delly Everyday, Joe Boii, Charles K, C. Leach, AdditUp Kevo, ManFly1718, Trip Club, and others. Doors open at 8 p.m. and tickets are $25 to $30.

Expect a night of "mischief and mayhem" at TT Roadhouse, 2915 North 68th Street in Scottsdale, during its Halloween party on Saturday, October 30. The joint's always-popular jukebox will be playing tunes all evening, drink specials and apps will be offered, and a midnight costume contest will feature cash prizes in four categories (including funniest, scariest, best overall, and best couple/group). Start time is 7 p.m. and there's no cover.

Roger Clyne and the Peacemakers will play in Cave Creek on Halloween weekend.
Ash Ponders

Roger Clyne and the Peacemakers will headline the outdoor Halloween party at Harold's Cave Creek Corral, 6895 East Cave Creek Road, on Saturday, October 30. Costumes are encouraged, but not required at the event, which gets going at 6 p.m. Advance tickets are $35 for general admission, $60 to $75 for VIP areas and seating.

Scottsdale party guru Raven Valdes’ annual Halloween bash inside the showroom of Scottsdale’s Talking Stick Resort, 9800 East Talking Stick Way, on Saturday, October 30, will feature music from the Superhero Band and DJ Kilo, dancing, drinks, and an upscale vibe. There will be signature cocktails, drink specials, and a midnight costume contest for prizes. The party gets underway at 8 p.m. General admission is $35 in advance and $45 at the door. VIP tickets are $180 to $510. Call 231-9999 for more details.

A costume contest with $500 in prizes will be the highlight of this event on Saturday, October 30, at Maxrix, 9139 East Talking Stick Way in Scottsdale. A special package will be available for $250 and includes access to a VIP Spark bowling lane and unlimited games for two hours, shoe rental, laser tag, and a Black Magic margarita tower. The start time is 10 p.m.

It wouldn’t be Halloween without the annual Monsters Ball celebration at the Alwun House, 1204 East Roosevelt Street, which will take place from 7 p.m. to 1 a.m. on Saturday, October 30. The arty affair will also include music from local Americana/alt-country band Blood Feud Family Singers, a “Ghoulesque” show by the ecdysiasts of VaVaVoom Productions, and a set by DJ Rebot. Patrons may also view the Alwun House’s current “Monsters Menagerie” art show. Tickets are $20 in advance and $25 at the door. Proof of a COVID-19 vaccination or a recent negative test result are required to attend. DJ Dan and divaDanielle will fill Walter Where?House, 702 North 21st Street, with beats and bass music on Saturday, October 30. All of the venue's art cars and immersive experiences will be available and the costumes worn by patrons are certain to be memorable. Doors are at 9 p.m. and general admission is $27. A recent negative COVID-19 test result or proof of vaccination is required.

Local bands Treasure MammaL and Lucky Baby Daddy are scheduled to perform at this typically wild and strange annual affair on Saturday, October 30, at Gracie's Tax Bar, 711 North Seventh Avenue. Djentrification and Beast Infection will be in the mix, GORB will supply the visuals, and a costume contest will award "baller prizes" to patrons in the best getups. It starts at 9 p.m. and admission is $5.

Zombie shtick will mix with tiki kitsch at this party on Saturday, October 30, at Lustre, 2 East Jefferson Street. It'll feature DJ Stoney Pie on the decks, specials on tropical drinks, a photo booth, and a costume contest. Lurch on by from 7 to 11 p.m. Admission is $25.

If you've never heard of "cholo goth," it's a musical and aesthetic style created by San Diego electronic rock band Prayers that's a mix of Mexican-American influences, goth culture, synth, metal, and other influences. Get a primer on Saturday, October 30, at Thunderbird Lounge, 710 West Montecito Avenue, when Dave Parley will perform a DJ Set. Tacos by Sabor A Mi will be available for purchase and DJ Gila Man will spin tunes from his eclectic music collection. Admission is free to the party, which begins at 7 p.m.

Hang with the Cryptkeeper and other creatures of the night at this indoor-outdoor celebration on Saturday, October 30, at Cobra Arcade Bar, 801 North Second Street. Arcade games will be set up in the parking lot, DJs Mane One and Yellawave will be in the mix, and a costume contest for cash prizes will take place. The party goes from 9 p.m. to 2 a.m. Admission is free. 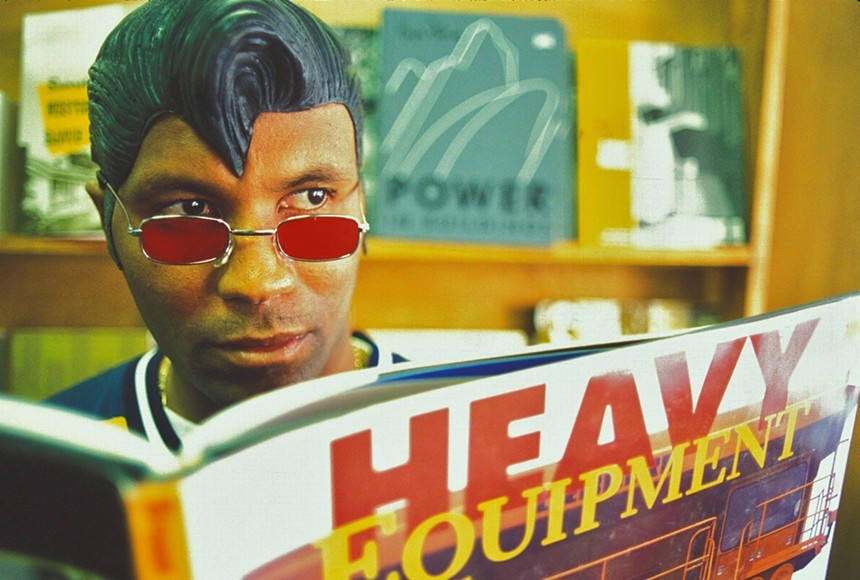 Rap icon Kool Keith and hip-hop trio Tha Alkaholiks will co-headline an all-ages party at Trill, 1817 East Indian School Road, from 11 a.m. to 8 p.m. on Saturday, October 30. Other artists scheduled to perform include Wildchild, Bronze Nazareth, A.F.R.O., Bukue One, and Teek Hall. A hip-hop swap meet will also go down in the parking lot and local DJs Fact135 and This Just-In will be on the turntables throughout the event. General admission is $20 and VIP packages (which include limited edition merch and collectibles) are $79.99.


Eddie 9V at The Rhythm Room

The Chicago guitarist will perform at night of "wild blues and soul" on Sunday, October 31, at the Rhythm Room, 1019 East Indian School Road. The show starts at 7 p.m. and tickets are $10.


Halloween Party at The Lost Leaf

The interior of The Lost Leaf, 914 North Fifth Street, will be invaded by indie act Vampiros Del Espacio (self-described as "a band of vampires from outer space residing in the desert of Arizona") on Sunday, October 31. There's no word on if their performance will involve any exsanguination. From Mars and Beekeeper share the bill for the 9 p.m. show. Admission is free.

Enjoy unlimited racing for $40 and half-off Velocity VR sessions starting at 6 p.m. on Sunday, October 31, at Octane Raceway, 9119 East Talking Stick Way in Scottsdale. Costumes are encouraged. Call 602-302-7223 for more info.
KEEP PHOENIX NEW TIMES FREE... Since we started Phoenix New Times, it has been defined as the free, independent voice of Phoenix, and we'd like to keep it that way. With local media under siege, it's more important than ever for us to rally support behind funding our local journalism. You can help by participating in our "I Support" program, allowing us to keep offering readers access to our incisive coverage of local news, food and culture with no paywalls.
Make a one-time donation today for as little as $1.