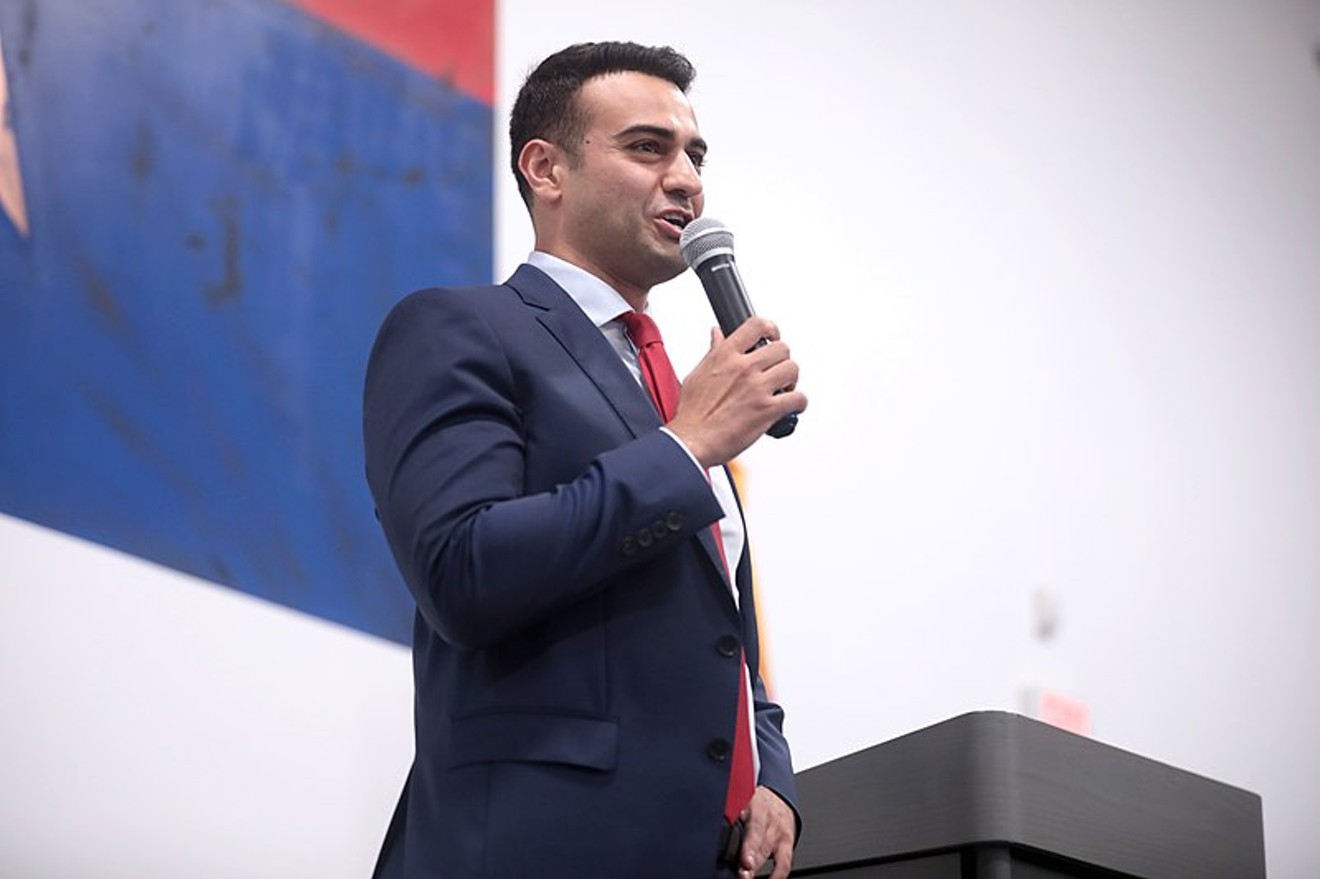 Abe Hamadeh filed a campaign disclosure that misstated his income and omitted required details about businesses he owned. Gage Skidmore
Abe Hamadeh, the GOP nominee for Arizona Attorney General, filed a financial disclosure statement that failed to include his income from two jobs, board membership and his interests in businesses.

Hamadeh's response to the missing items in the legal document he signed in March "under penalty of perjury"? He was busy and admitted the document was wrong.

It's the latest example in which the Trump-endorsed Hamadeh has skirted Arizona law as he tries to convince voters to make him the state's top legal officer. Last week, Phoenix New Times unearthed evidence of Hamadeh boasting as a teenager about committing voter fraud and making antisemitic and sexist rants.

In the financial disclosure statement, filed with the Arizona Secretary of State on March 17, Hamadeh claimed his total income was less than $1,000 from April 2021 to March 2022. But Hamadeh worked in the Maricopa County Attorney’s Office until October 1, 2021, one month before he announced his campaign. His annual salary was $63,086, according to county records.

Hamadeh also was an intelligence officer in the U.S. Army Reserve, which is a paid position. Government documents show that commissioned officers in Hamadeh’s position receive $112.86 per drill. According to the U.S. Department of Defense, Army Reserve officers are obligated to drill for at least 48 periods per year, plus two weeks of training. That would mean Hamadeh could have earned $5,417.28 as an Army Reserve officer.

The financial disclosure statement omitted a few other important details, too.

When asked to disclose “the name and address of each business, organization, trust or nonprofit organization in which you … held any office, position, or fiduciary relationship,” Hamadeh answered, “N/A.” According to Hamadeh’s website, however, he is “a board member of the Dean’s Council of the College of Liberal Arts and Sciences at Arizona State University,” a membership that predates the financial disclosure statement.

Hamadeh also inaccurately asserted in the disclosure statement that he does not control any businesses. Hamadeh is listed as the sole member for two active limited liability companies — WRA Properties in Scottsdale and Ham Advisors in Tucson, according to the Arizona Corporation Commission.

In 2018, Ham Advisors purchased a property on North 99th Street in Scottsdale for $384,000 and the business still owns the property, records show. In other campaign documents, Hamedeh identifies the property as his residence. But in the financial statement, Hamadeh does not disclose ownership of the property, which is required on the form.

Arizona law spells out what candidates are required to disclose, according to Daniel Arellano, an election law specialist and partner at Herrera Arellano LLP in Phoenix.

“The statute is pretty clear that you’re required to disclose compensation, businesses, and all those things,” he said.

'That Document was Wrong'


Candidates for public office in Arizona are required to file a financial disclosure statement that contains “the name and address of each employer and of each other source of compensation” amounting to more than $1,000 received during the preceding calendar year. They are also required to disclose board memberships, businesses, and property ownership.

A month after Hamadeh filed his original statement and 10 days after the mandatory filing deadline, he sent an amended statement to the Secretary of State’s office. The amended disclosure includes his Army compensation, but still leaves out the money he earned in the county attorney’s office as well as his board membership, businesses, and property.

“Mr. Hamadeh submitted an updated financial disclosure statement on April 14, 2022, after the filing deadline,” said Sophia Solis, communications director for the secretary of state. “All candidate nomination paperwork must be submitted by April 4 at 5 p.m., so we do not have his updated form posted.”

Intentionally providing false information on the form could be felony perjury, according to state law. But Arellano said that even unintentionally filing a false statement, as Hamadeh claimed happened with the form, could be a misdemeanor.

“Regardless of the amendment, the law here is clear,” Arellano said.

In June — months after filing the financial disclosure statement and then amending it — Hamadeh appeared on Prescott Talks, an interview show from Prescott eNews. Hamadeh told guest host Jim Dutton that he rushed through the document and it contained errors.

"When we filed that financial disclosure statement, that was actually filing to get on the ballot at the time. So they had me rush to a computer. We didn’t know we needed that statement until we were doing it. We rushed through it," Hamadeh said.

"It’s a legitimate question because that document was wrong," he added.

Hamadeh also questioned why the Secretary of State's office would not replace the original filing with the amended version online.

"It is weird that they are not updating it. It’s weird because imagine if somebody who wanted to actually hide some stuff, they would just file that document and then just update it legally. I don’t know, it’s odd. I don’t control the Secretary of State’s office," he said.


In the interview, Hamedah bragged that he's a straightforward political candidate. "I’m brutally honest. I tell people, 'Don’t ask if that dress looks good on you.' I think what we need now in politics is just people with direct answers," he said.

Hamadeh defeated former Tucson City Councilmember Rodney Glassman in the Republican primary election earlier this month. He faces off against Democrat Kris Mayes in November.
KEEP PHOENIX NEW TIMES FREE... Since we started Phoenix New Times, it has been defined as the free, independent voice of Phoenix, and we'd like to keep it that way. With local media under siege, it's more important than ever for us to rally support behind funding our local journalism. You can help by participating in our "I Support" program, allowing us to keep offering readers access to our incisive coverage of local news, food and culture with no paywalls.
Make a one-time donation today for as little as $1.
Elias Weiss is a staff writer at the Phoenix New Times. A native of Charlotte, North Carolina, he reported first for the Northwest Arkansas Democrat-Gazette and was editor of the Chatham Star-Tribune in Southern Virginia, where he covered politics and law. In 2020, the Virginia Press Association awarded him first place in the categories of Government Writing and Breaking News Writing for non-daily newspapers statewide.
Contact: Elias Weiss
Follow:
Twitter: @ecweiss