Abe Hamadeh Wants to be Arizona’s Top Cop. As a Teen, He Bragged About Voter Fraud A trove of online messages suggest Abe Hamadeh skirted election laws as a teenager, years before campaigning against election fraud as the GOP nominee for Arizona Attorney General. Gage Skidmore

Abe Hamadeh has built his campaign for attorney general around cleaning up elections in Arizona. Yet as a teenager, he boasted to an online message board about voting before he was legally allowed to and altering his mom's ballot.

The posts were among thousands Hamadeh made to an online message board beginning in 2007. When he wasn't bragging about altering ballots, he was offering antisemitic and sexist rants, backing Sheriff Joe Arpaio and arguing that voting should be limited to college graduates who pass intelligence tests.

As a candidate, Hamadeh smartly used money and the Big Lie — that the 2020 presidential election was stolen from former President Donald Trump — to sucker Trump into backing his campaign.

Of all Trump’s endorsements, championing the 31-year-old retired Army captain and one-time Maricopa County prosecutor was among his most surprising. Hamadeh was a low-level prosecutor for the county for less than three years even though his campaign website brags the he "fought in dozens of trials."

Hamadeh’s upholding of the Big Lie led Trump to pluck him from a crowded field of Republicans during the primary, which ended in Hamadeh defeating former Tucson City Councilmember Rodney Glassman. Hamadeh faces Democrat Kris Mayes in November.


“Abe Hamadeh knows what happened in the 2020 election, and will enforce voting laws so that our elections are free and fair again,” Trump wrote in his June endorsement.


Hamadeh said so himself.


“As Attorney General, I will rebuild the confidence of our elections by prosecuting election fraud to the fullest extent of the law,” the political newcomer from Scottsdale said in a statement. “Confidence in our elections is the cornerstone to our country. We must restore voters’ trust.”

In June 2007, Hamadeh, then 16 years old, became an active member of the online message board Ron Paul Forums, a virtual gathering space for supporters of Ron Paul, a Libertarian, former member of Congress and three-time presidential candidate.


The most recent archived version of Hamadeh’s profile on the site shows that by October 3, 2010, he had posted 4,163 times. His posts quoted in this story include their original typos, misspellings and grammatical errors.

Many of the posts are attached to discussions about radical ideas for election reform. They include Hamadeh’s own eugenics-reminiscent proposition that only college-educated Americans who passed intelligence tests should be allowed to vote by law, “not people who just go to a DMV and sign up to vote.”


In a series of posts that started on October 5, 2008, the 17-year-old aspiring professional wrestler claimed that he altered and then cast his mother’s absentee ballot for Barack Obama, a then-U.S. senator who was running for president.

'No I cannot vote, I just submitted my mothers absentee ballot, she votes who I vote for, she voted for Ron Paul, and I’m saddened that I had to vote for Barack Obama, but it was the right thing I had to do.' – Abe Hamadeh

“Obama is getting all of this crap simply cause hes black, he has an Arab name, hes the only senator who is black in the Senate, he is successful, and he is a Harvard Law graduate, they're scared they might have a smart man in the white house,” Hamadeh wrote. “Based on Barack Obama's intelligence I casted my vote for him yesterday through absentee.”

In the same discussion thread, Hamadeh claimed that then-Republican presidential nominee John McCain, who lived in Phoenix, was a “radical fascist.”

In a subsequent post, Hamadeh wrote this: “No I cannot vote, I just submitted my mothers absentee ballot, she votes who I vote for, she voted for Ron Paul, and I’m saddened that I had to vote for Barack Obama, but it was the right thing I had to do."

Under Arizona law, it's a felony for a person to knowingly mark a ballot "with the intent to fix an election for that person's own benefit or for that of another person" or to possess anyone’s early ballot other than your own. It's also illegal for anyone younger than 18 to cast a ballot.


The username on the account that posted the comments is “Hamadeh.” The birthday listed on the account is Hamadeh’s birthday, May 15, 1991. The location listed on the profile was Scottsdale, where Hamadeh lived, and the hometown listed on the profile was Chicago, Hamadeh’s place of birth. A post in January 2008 also indicated the use of an email address from which Hamadeh sent a November 2007 email to then-Alaska Governor Sarah Palin. The author of that email included a Phoenix phone number that is also associated with Hamadeh.

'If you think Jews arent big in america (2%) how come 56% of them are CEO'S … Jews are influential and for the most part rich. its good were targetting Arabs now, next will target Jews.' – Abe Hamadeh

Hamadeh's campaign didn't directly address whether or not he wrote the posts or committed voter fraud. Instead, in a statement to New Times, a campaign spokesperson said Hamadeh's digital footprint dates to a time when teenagers made comments "well before their minds were even fully developed."

“Abe Hamadeh is the youngest statewide candidate in the country, and one of the first to be scrutinized on his digital footprint dating back to a time when he was 16 years old, the same time he thought he would grow up to become a wrestler in the WWE," said Erica Knight, a spokesperson for the Hamadeh campaign.

“We are entering a new era of political opposition where candidates who have lived through their adolescent years on the internet are being judged and criticized based on comments they made well before their minds were even fully developed. It is now our responsibility to be careful where we draw the line," Knight added.


Brett Johnson, an election law specialist and partner at Phoenix-based Snell & Wilmer, said Hamadeh's post could have been the admission of a felony.


“There are issues here,” Johnson told New Times. “It could or could not be a felony. In this case, you can prove the criminal act, but can you prove the intent?”

The actions Hamadeh discussed in the years-old posts fall outside the state's statute of limitations, which is seven years for charges of voter fraud. Hamadeh’s posts, though, still raise eyebrows for a candidate whose campaign centers on restoring sanctity in Arizona’s elections.

“We have all had life experiences where we, as individuals, have learned, grown and evolved into the people we are today,” Knight said. “Abe grew up, joined the military and became a great and highly accomplished patriot. Time in service changed, matured and, most importantly, provided Abe with the values he currently has and the deep love he has for his country.”

Mayes, Hamadeh's opponent in the November election, criticized his record.

"Abraham Hamadeh has a track record of dishonesty and deceit," Mayes told New Times. "We see it in his interviews, his daily tweets and his public appearances. The Attorney General's Office requires honesty and integrity at its core, which Mr. Hamadeh does not possess." 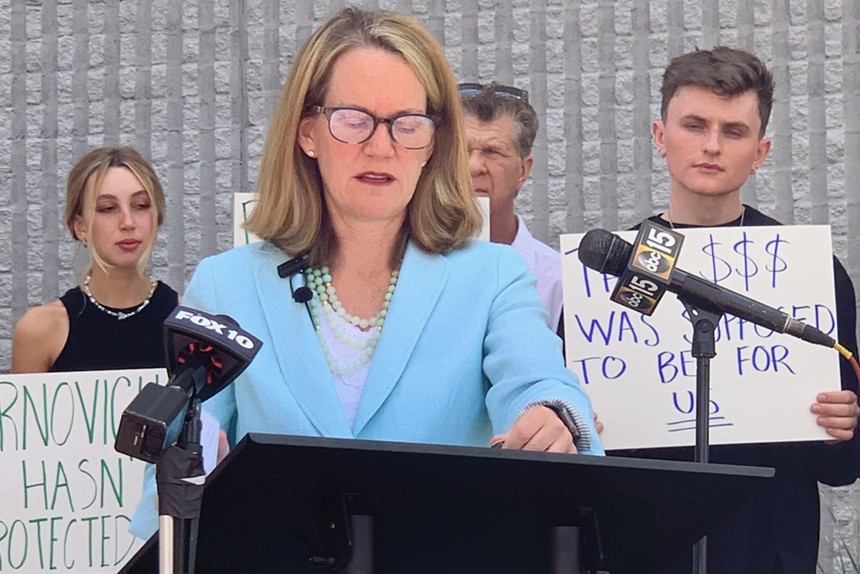 Hamadeh was born and raised in Chicago by parents from Syria and Lebanon.

In 1994, a grand jury in Illinois indicted his father, jeweler Jamal Hamadah, on charges of conspiracy to commit arson after the Mikro Kodesh Anshe Tiktin synagogue was fire-bombed, according to the Chicago Reader. When he was arrested, Hamadah admitted to being in the U.S. illegally after overstaying a visitor's visa.


The charges were dropped after the two men who set the fire failed to cooperate with prosecutors and testify against Hamadah. At a later deportation hearing, the judge allowed him to stay stateside because his son, Abe, is a U.S. citizen.

In 2008, Abe Hamadeh advocated for cutting U.S. funding to Israel and indicated fervent opposition to Israel as a state in several of his posts on the Ron Paul Forum.


"If you think Jews arent big in america (2%) how come 56% of them are CEO'S … Jews are influential and for the most part rich. its good were targetting Arabs now, next will target Jews," he posted in July 2007.


These days, Hamadeh vows to use the power of the attorney general’s office to uphold Arizona’s draconian abortion bans. In December 2007, Hamadeh venerated a commenter on the Ron Paul Forum who was met with downturned thumbs during a protest outside an abortion clinic in Orlando, Florida. “Women always thumb down, they all complain about there right to choose to have an abortion," he wrote in the post.

In 2009, in response to a post in which the author indicated that conservative commentator Ann Coulter had endorsed Ron Paul’s presidential bid, Hamadeh wrote, “She is a BITCH, I don't give a $#@! if she votes for Ron Paul, but she better not be speaking at any, ANY rallies.”

'Sheriff Joe Arpaio is probably one of the most honest people to have served this State.' – Abe Hamadeh

Later that year, he defended former Maricopa County Sheriff Joe Arpaio, who was convicted of criminal contempt in federal court in 2017 and cost taxpayers hundreds of millions of dollars settling lawsuits stemming from decades of egregious human and civil rights violations.

“Sheriff Joe Arpaio is probably one of the most honest people to have served this State,” Hamadeh wrote.

He added that “people are to dumb to make decissions on there own, they need the government to help guide them.”


“Comments allegedly posted during his teenage years do not represent his current values and views,” Knight said. “I encourage the opposition to stop wasting time picking apart the actions of children and focusing on nonsense and start taking action to make sure the American dream still exists for the next generation.”