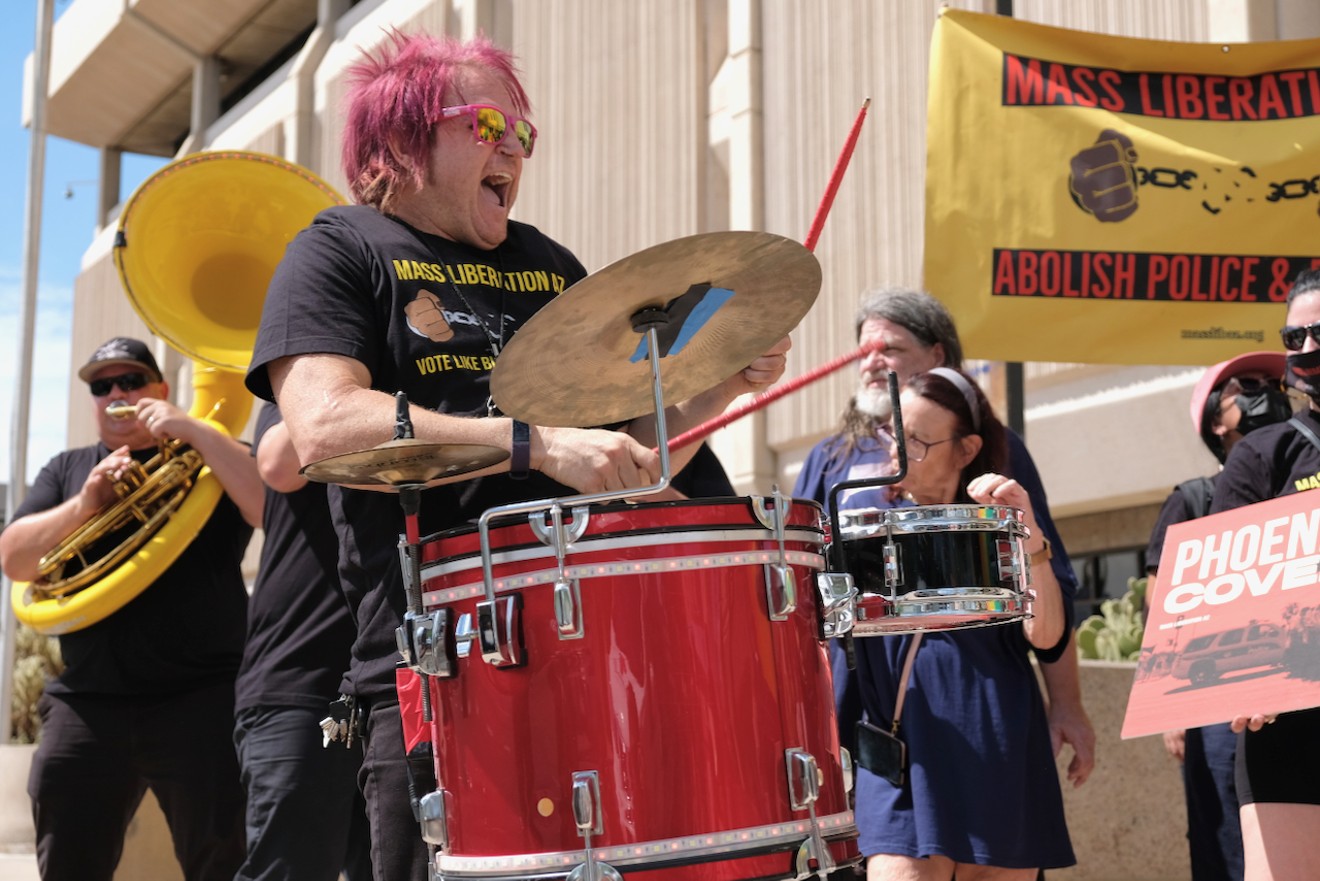 A band played in front of Phoenix police headquarters on Monday to celebrate the departure of Chief Jeri Williams. Katya Schwenk
Outside the Phoenix Police Department's downtown headquarters on Monday afternoon, the air was jubilant. A brass ensemble played a raucous rendition of "Na Na Hey Hey Kiss Him Goodbye." A crowd cheered in the summer heat as temperatures reached the high 90s.

The celebration was for police Chief Jeri Williams. Former police chief, that is. As of Monday, Williams no longer heads up the department.

The press event, staged by activist group Mass Liberation Arizona, was held to "celebrate [Williams'] forced retirement," according to the group. Williams, who became chief in 2016 and announced her retirement in May, has long been a focus for Mass Liberation and other advocates for change in the agency.

"Today, we are celebrating the win of removing Jeri Williams from office as a police chief," said Patricia Pagliuca, an organizer with Mass Liberation Arizona. Activists, Pagliuca claimed, "forced Williams out of her position." Williams said she was stepping down to "prioritize family and explore future opportunities" despite mounting criticism of the department and a federal investigation.

Monday marked Michael Sullivan's first day as the new interim chief of police. Sullivan, who the city hired in July, comes to Phoenix by way of the Baltimore Police Department, which faced a yearslong effort to come into compliance with a consent decree entered into after a Department of Justice investigation. Sullivan spent the majority of his career in Louisville, Kentucky, another city whose police force is facing a probe by the feds.

Sullivan was brought on in an interim role — for a 12-month contract that can be extended up to 24 months — specifically to oversee the DOJ's probe into the Phoenix department, which was announced in August 2021. He will be paid $233,000 a year.

Williams has not yet departed the agency officially. She agreed to stay on to help Sullivan transition into the new role. A police spokesperson said her last day has not yet been set.

Patricia Pagliuca, an organizer with Mass Liberation Arizona, spoke during a protest at the Phoenix police headquarters on Monday.
Katya Schwenk

'No Stranger' to Scandal

The event on Monday, though, was not much of a warm welcome for Sullivan, either. "He is here to continue the cover-up that Chief Williams, Mayor Kate Gallego, City Manager (Jeff) Barton, and the Phoenix City Council have coordinated for over two years," Pagliuca said.

She went through the laundry list of scandals that have occurred under Williams' tenure, including the false charging of Black Lives Matter protesters as gang members and the circulation among officers of "challenge coins" that depicted a protester getting shot in the groin. This summer, ABC15 exposed the use of Signal, an encrypted instant messaging app, by Williams and other top police officials.

"Michael Sullivan comes from some of the most violent police departments in this nation," Pagliuca said. She called him "no stranger" to such scandals.

Bruce Franks Jr., one of the protesters targeted and charged with criminal gang activity in 2020, also called out corruption in the agency during the event on Monday. Franks, who is campaign manager for Maricopa County Attorney candidate Julie Gunnigle, also said he was wary of the DOJ probe.

"We have not heard anything from the DOJ other than the amount of money [the city] has spent," he said. Such probes, he said, "are wasteful. They are harmful, they are useless, and they give the community a false sense of hope."

Sullivan was hired specifically for his experience in handling DOJ investigations. In Phoenix, the initial stage of the federal probe, which is investigating patterns of misconduct in the department, is likely nearing an end. The feds have given no official updates about the timeline. Other, similar DOJ probes into major law enforcement agencies have generally lasted about 18 months.

So far, the tab for the investigation has reached nearly $2 million, according to the city.

Sullivan hasn't spoken to the media since he was hired, but he is scheduled to meet with reporters on Wednesday.

Asked for comment about the press conference and the allegations made by speakers, police spokesperson Philip Krynsky wrote to Phoenix New Times, "We were aware there was a small news conference next to police headquarters; however we did not attend."

As Franks finished his speech and stepped away from the podium, a band member started blowing a whistle. The tuba kicked in. And the crowd began cheering.
KEEP PHOENIX NEW TIMES FREE... Since we started Phoenix New Times, it has been defined as the free, independent voice of Phoenix, and we'd like to keep it that way. With local media under siege, it's more important than ever for us to rally support behind funding our local journalism. You can help by participating in our "I Support" program, allowing us to keep offering readers access to our incisive coverage of local news, food and culture with no paywalls.
Make a one-time donation today for as little as $1.