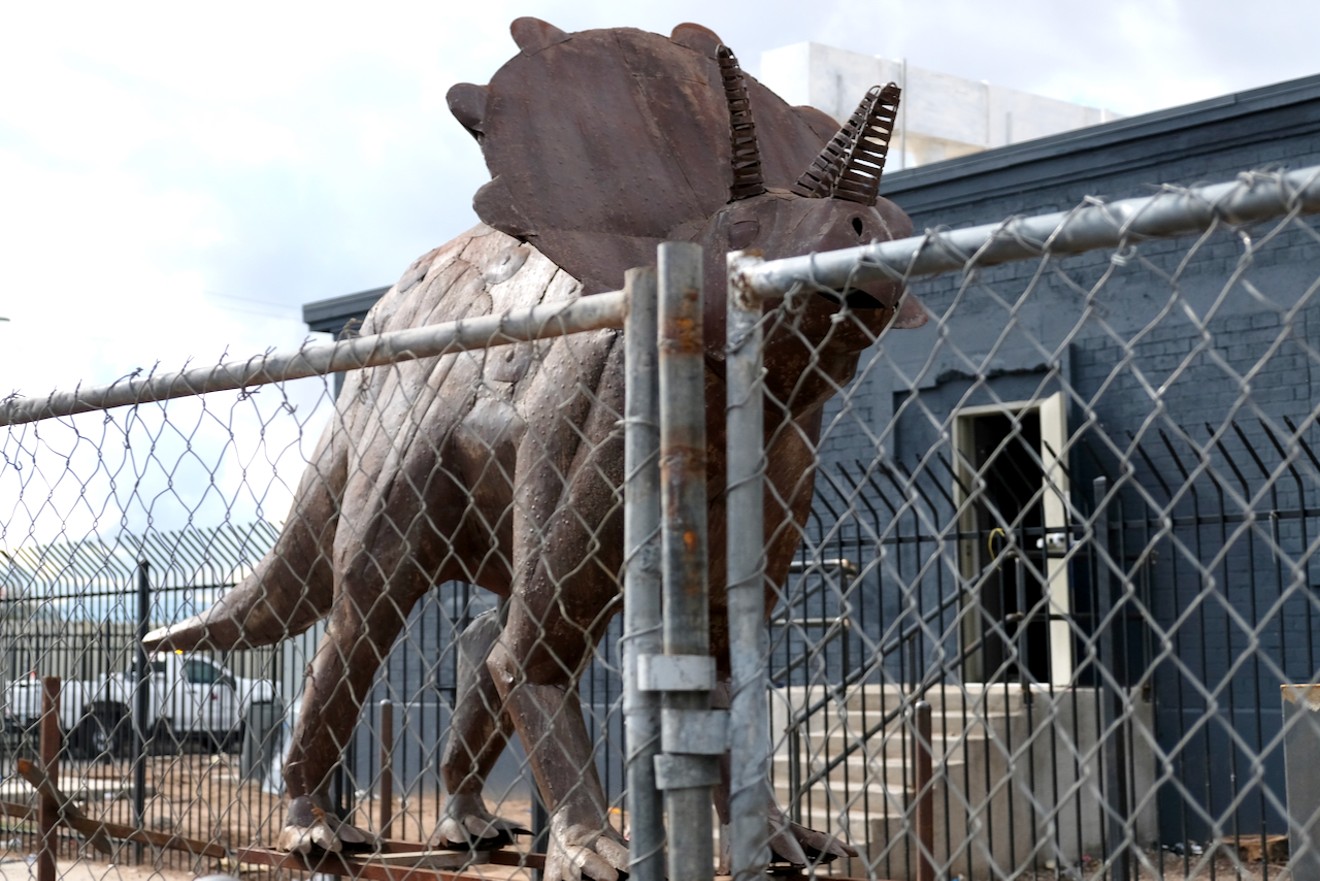 The city of Phoenix gave a California kitchen company 30 days to remove metal sculptures, including this triceratops, that are in the public right of way. Katya Schwenk
A California-based ghost kitchen company installed giant dinosaurs in a sprawling homeless encampment in downtown Phoenix and now has until December 30 to remove them.

The metal sculptures sit behind fencing along a stretch of Ninth Avenue, where tents had once lined the street. In mid-November, a property owner installed the unauthorized dinosaurs in the right of way after the block was cleared for gas line construction. For weeks, the city of Phoenix and companies in the area refused to identify who was responsible, including for a Phoenix New Times story on December 15.

Records obtained by New Times show that the city believes Maker Kitchens, a multistate commercial kitchen company, is to blame. The company has until December 30 to remove the sculptures, which line the sidewalk alongside its warehouse on Jackson Street.

On November 30, the city denied the company's November 15 application for a permit to install the dinosaurs, according to documents obtained by New Times. That's when Kini Knudson, the director of the city's Street Transportation Department, wrote to Yossi Reinstein, a partner at Maker Kitchens, that his permit was denied.

"Please remove the obstructions you have placed on and across the public right-of-way (ROW) adjacent to your property at 910 W. Jackson Street," Knudson wrote. If the structures are not gone by December 30, "the city will take further action," Knudson continued.

There are still open, valid permits in place for utility construction in the area, which New Times also obtained and reviewed.

Maker Kitchens has not responded to any of New Times' inquiries about the dinosaurs. Reinstein did not respond to a December 20 email asking for his response to the city's letter.

The dinosaurs are another flash point in an ongoing conflict in the Zone, where hundreds of people live on the streets. A group of local property owners — including Phoenix Kitchens, which is owned by Maker Kitchens — wants the city to clear the encampment. In August, the property owners sued to try to force them to do so. That lawsuit is ongoing.

Within weeks of the suit being filed, the city announced plans to restart its sweeps of the Zone. The cleanups force unsheltered people to temporarily move their tents and belongings while the streets are swept and sanitized. The city paused sweeps in the Zone in January after allegations that it destroyed the property of unsheltered people, charges that the U.S. Department of Justice is investigating.

In November, the Arizona branch of the American Civil Liberties Union sued over the plans for restarting the sweeps. The plaintiffs in the ongoing case secured an initial victory — a preliminary injunction by a federal judge that blocks the city from seizing property without notification — but did not stop the city from moving forward with its first sweep in the Zone in months on December 16.

The dinosaurs frustrated local advocates, who saw them as another attempt by property owners to keep unsheltered people away from their property at any cost.

The sculptures also blindsided city officials, who said they were aware only of utility construction in the area. The city had cleared the area in early November for the installation of a gas line. But within days, metal sculptures covered the city right of way all along the west side of Ninth Avenue between Jackson and Madison streets.

Gregg Bach, a spokesperson for the city's Street Transportation Department, said that the city's letter "is the most current information" on the situation. 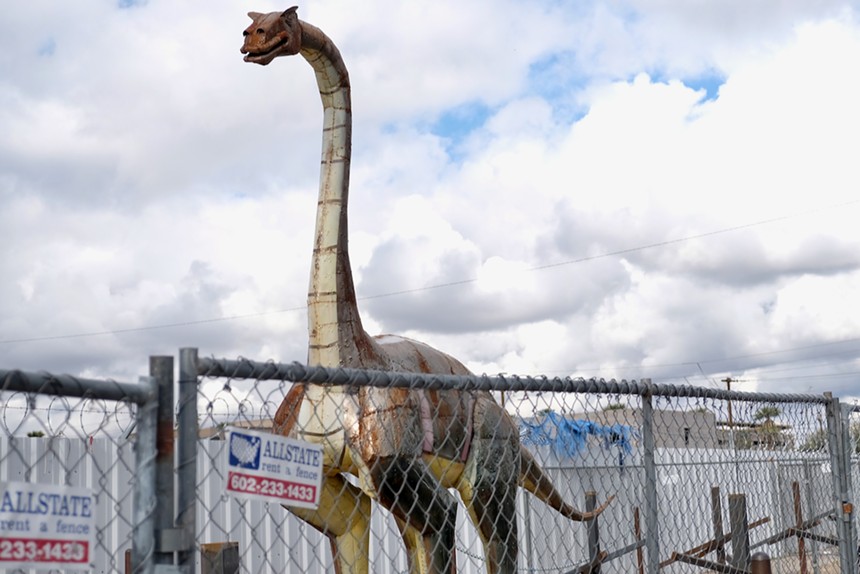 Bill Morlan, president of Electric Supply, says he funded this brontosaurus. It's now been taken down.
Katya Schwenk

It was not only Maker Kitchens that was responsible for the dinos, New Times has learned.

The kitchen company owns property on the southern side of the block where the dinosaurs are located. The northern side is owned by Electric Supply. The latter company's president, Bill Morlan, had previously told New Times that, "I was not the one who put them up."

But Morlan admitted in a text message to New Times on December 20 that he was, in fact, involved. "I did fund one dinosaur, and it has since been removed," he wrote. He said he decided to clarify the record to ensure that New Times "was not reporting information that was misleading or incomplete."

Morlan's dinosaur appears to be the towering brontosaurus, which disappeared in the days after New Times first reported on the dinosaurs. When a reporter visited the area on December 20, Morlan's brontosaurus and other metal sculptures that had extended down the northern half of the block had vanished.

Morlan said he chose to get involved in the dinosaur plan after the city cleared the block for gas line work. "I felt I could help keep the area safe and clean," he said. "When I saw on social media that the city felt the statues were not a good idea, I had them taken down."

But Morlan is still opposed to the conditions that people face in the area. "I do not believe that having people sleep on a patch of dirt next to a road is compassionate or safe," he said. "The recent tent fires, overdose deaths, and car crash in this area make it clear this situation is not good for people living in the streets or the neighborhood."

The metal sculptures adjacent to Maker Kitchens remain in place, including the large triceratops and some non-dinosaur creations, such a series of prickly pear cacti sculptures. For now, at least.
KEEP PHOENIX NEW TIMES FREE... Since we started Phoenix New Times, it has been defined as the free, independent voice of Phoenix, and we'd like to keep it that way. With local media under siege, it's more important than ever for us to rally support behind funding our local journalism. You can help by participating in our "I Support" program, allowing us to keep offering readers access to our incisive coverage of local news, food and culture with no paywalls.
Make a one-time donation today for as little as $1.