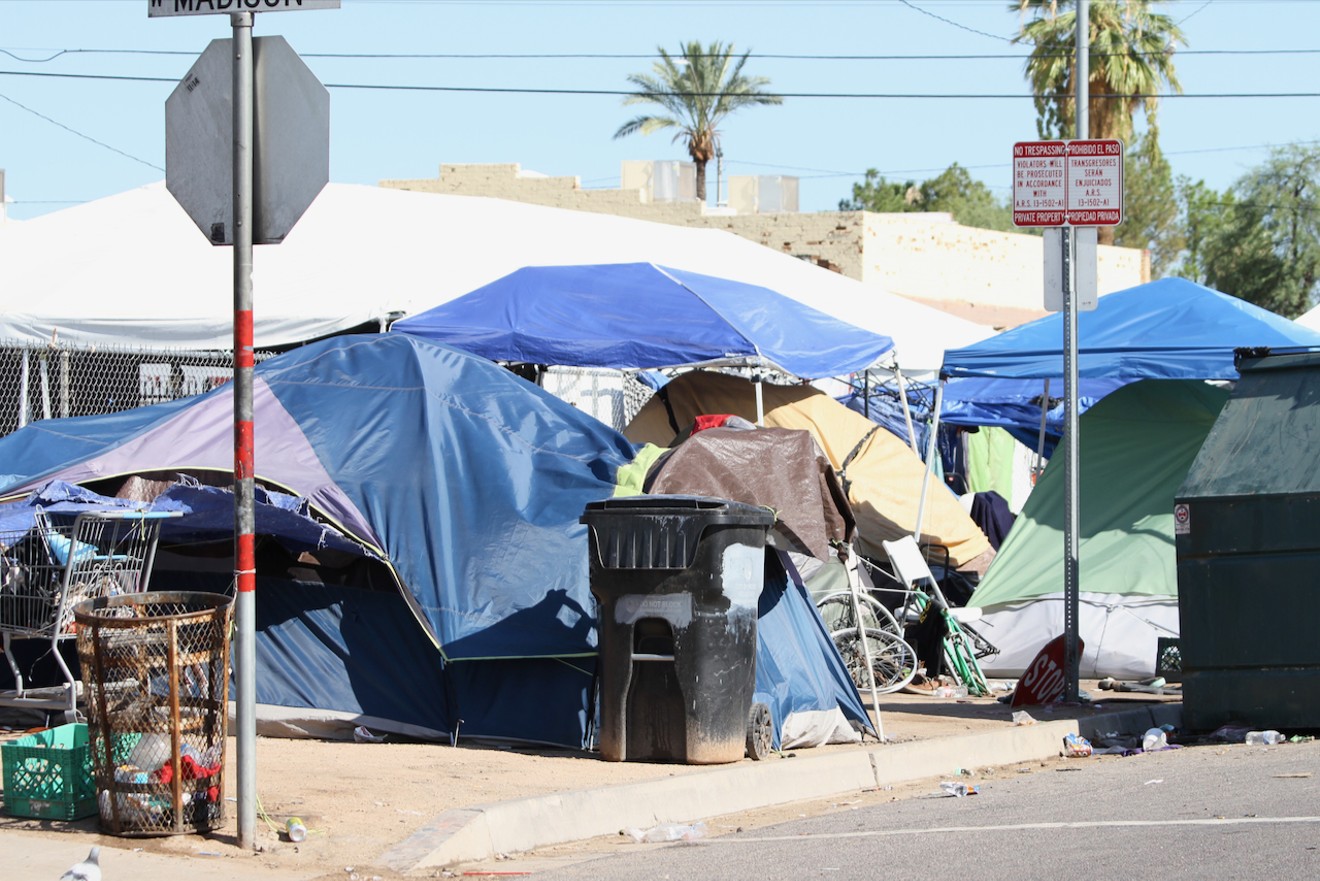 The ACLU suit, which cited a November 15 Phoenix New Times story that first reported the city's plans, argued that the cleanups violate the civil rights of people living in the encampment and requests a judge step in to prevent the city from restarting them.

The suit was filed in U.S. District Court on behalf of Frank Urban and Faith Kearns, Phoenix residents who alleged they lost property in raids, and Fund for Empowerment, the organization with which they are now affiliated. The lawsuit named the city of Phoenix, former Phoenix police Chief Jeri Williams, and current police Chief Michael Sullivan as defendants. Sullivan took over the troubled Phoenix Police Department in September.

"The destruction of property that occurs during these raids is really alarming," said Benjamin Rundall, an ACLU of Arizona attorney who is working on the case. "And the fact that it is ongoing in other parts of the city, the fact that they are going to start up these sweeps in the Zone — I mean, it's just something that isn't tolerable."

The complaint argued that the sweeps violate the civil rights of unsheltered people. It also challenged city ordinances that prohibit camping and sleeping in public and argued that the city is criminalizing homelessness.

"Rather than confront its housing crisis head-on and invest in sustainable solutions to homelessness, the city is terrorizing the very people it should be helping," attorneys wrote in the complaint.

Dan Wilson, a spokesperson for the city of Phoenix, said the city "cannot speak to the specific claims" of the suit but added that it is committed to serving all residents. "The city developed the Strategies to Address Homelessness [a report] and in the last fiscal year dedicated nearly $50 million dollars on solutions including shelters, increased affordable housing, and mental health services," he wrote in an email to New Times. "In June 2022, the Phoenix City Council also approved $70.5 million in affordable housing and homelessness programs as part of the [American Rescue Plan Act] Second Tranche Strategic Plan."

Frank Urban said past sweeps by the city resulted in him losing property he needs to "survive on the streets."
Katya Schwenk

For years, the city conducted regular raids in the homeless encampment that surrounds 12th Avenue and Jackson Street — often referred to as the Zone. More than 1,000 people live on the streets in the area near service providers such as the Andre House and the Human Services Campus. Tents line the sidewalks for blocks.

Before January 2021, city staff and police would conduct sweeps three times a week in the Zone. As early as 3 a.m., people would be forced to move their belongings and wait for the area to be cleaned in a process that sometimes took hours. Frequently, the ACLU alleged in the lawsuit, the city would seize unattended property and cause the loss of important documents or living necessities.

As resistance to the sweeps grew, and the U.S. Department of Justice launched an investigation into the police department's handling of the property of unsheltered people, the city paused the practice — in the Zone, at least. Since January, the city has conducted only limited street cleaning in the area.

Now, the city is poised to restart the cleanups.

Urban and Kearns have both experienced chronic homelessness in Phoenix. In an interview with New Times, the two said they lost key documents — such as identification or birth certificates — in previous sweeps. That prevented them from securing housing for years, they said.

"Everything that you would need to survive on the streets was taken indiscriminately and just tossed aside," Urban recalled. 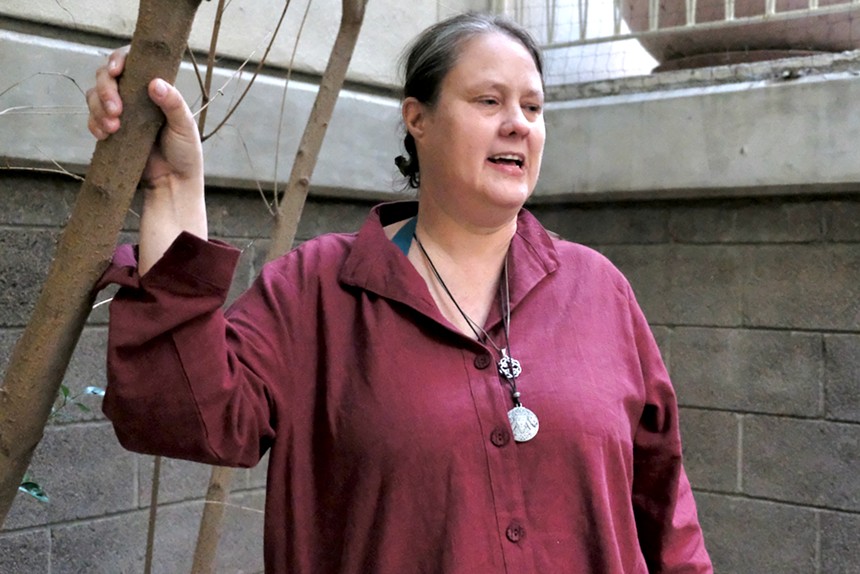 The ACLU suit outlined the history of the cleanups in Phoenix, in which police officers and city crews arrive, sometimes without warning, and force unsheltered people to move their tents, living structures, and all other belongings. Although the city ended the sweeps in the Zone — where they had attracted the most scrutiny — the practice has continued elsewhere, ACLU attorneys alleged without offering additional details.

In their complaint, ACLU attorneys said the decision to restart cleanups in the Zone is the result of another lawsuit over the homeless encampment: Brown v. City of Phoenix. In that suit, which was filed in August, property owners in the Zone claimed the ongoing encampment violates public nuisance laws and demanded the city take action to address crime, waste, and other issues in the area.

At an October hearing in the Brown case, city attorneys told the judge that officials were planning to bring cleanups back to the Zone. New Times obtained draft plans by the city and the Human Services Campus that outlined new protocols for the cleanups. In an interview in November, the city's director of homeless solutions, Scott Hall, said that the cleanups would restart sometime in December.

In that same interview, Hall declined to comment on the Brown litigation and its role in restarting the cleanups.

"The city’s only reason for performing these sweeps is in response to the Brown lawsuit brought by Phoenix residents which requests relief which would violate the constitutional rights of the unsheltered community," ACLU attorneys argued.

Faith Kearns said she hopes a new lawsuit over the city's approach to the Zone brings change.
Katya Schwenk

In a separate motion, ACLU attorneys requested that a judge issue an injunction to prevent the city from restarting sweeps and enforcing ordinances against camping and sleeping in public. "Given defendants’ prior treatment of the unsheltered community during such sweeps, particularly during the holidays, plaintiffs believe that time is of the essence to ensure the constitutional rights of those who are unsheltered are protected," according to the lawsuit.

The complaint also raised questions about two city ordinances that prohibit camping and sleeping in public. In the past, the city has issued tickets during sweeps — for camping, sleeping, or other infractions such as trespassing or obstructing the thoroughfare, according to the ACLU and the Fund for Empowerment.

The city has said it no longer issues tickets for urban camping after a 2019 decision from the Ninth U.S. Circuit Court of Appeals. The ruling held that cities could not issue tickets for camping in public spaces if there was a shortage of shelter beds.

Data obtained by New Times earlier this year showed that in 2021, nine urban camping tickets were issued compared with 238 in 2017. All nine tickets were ultimately dismissed. It's unclear how frequently the city issues tickets for sleeping in public spaces.

Asked what she hoped the lawsuit would bring, Kearns said simply, "Change."
KEEP PHOENIX NEW TIMES FREE... Since we started Phoenix New Times, it has been defined as the free, independent voice of Phoenix, and we'd like to keep it that way. With local media under siege, it's more important than ever for us to rally support behind funding our local journalism. You can help by participating in our "I Support" program, allowing us to keep offering readers access to our incisive coverage of local news, food and culture with no paywalls.
Make a one-time donation today for as little as $1.