Sullivan began Monday after a hiring process largely shrouded from public view. On Wednesday, he spoke briefly with media outlets for the first time inside the Phoenix Police Department headquarters downtown. He offered few specifics to Phoenix New Times about immediate changes he's planning but said he's been in "open conversations" with federal investigators and will be focusing on how to ensure compliance with results of the federal probe.

The new chief, who has a decades-long career in law enforcement in the top ranks of agencies across the country, was clear about his priorities for his first weeks in office. "First and foremost, we're here to prevent and reduce crime," Sullivan said. "Violent crime is at a level that we need to immediately address."

Sullivan is taking over for former Chief Jeri Williams, who announced her retirement in May. Williams said she was leaving for personal reasons and to pursue new opportunities, but activists have loudly noted the political pressure she faced at the time. On Monday, Mass Liberation Arizona, a group that has been particularly dogged in criticizing Williams, celebrated her departure with a brass ensemble.

Williams will remain at the department during Sullivan's transition. A spokesperson told New Times this week that her last day was not yet set.

Sullivan spent the last three years in Baltimore, where the police department is several years out of a U.S. Department of Justice probe similar to the ongoing one in Phoenix. That probe, Sullivan said, was "massive in scope," and the consent decree had hundreds of mandates. After years, and millions of dollars, the city is still working on its compliance efforts.

In Phoenix, the investigation is "much more narrow," Sullivan remarked. He said he had no information on the timeline of the probe, which is hardly a surprise. Federal investigators and the city have not said when it will end.

The DOJ probe is a civil investigation, searching for patterns of misconduct across the department. The original announcement, back in August 2021, said federal investigators would look into the department's treatment of demonstrators, homeless people, and people with disabilities.

The investigation's full scope is still unclear. But over the last year it has included contacting the families of people who died at the hands of police and requested documents relating to the "ACAB gang" scandal, in which protesters were falsely charged with criminal gang activity.

Asked about what he saw as the root causes of the problems in the Phoenix police department, Sullivan deflected. "The Department of Justice outlined the five areas of concern in their investigation. In terms of the cause, I would say you'd have to go to them to get that answer," he said.

Once the DOJ releases its investigation, the probe will turn to getting the department into compliance. Typically, law enforcement agencies will enter into a consent decree with the Justice Department. Sullivan said he had a "three-legged" approach to ensuring effective compliance, which consists of the initial policy change, training, and then assessing the implementation.

"When it came to training," Sullivan said, he felt that "many departments around the country have not done a good job of that in the past," undermining any policy change. It's also important to evaluate if compliance was occurring, he added. "Having a system to measure compliance is critically important. I'm going to work very hard to put those systems into place in Phoenix," Sullivan said. 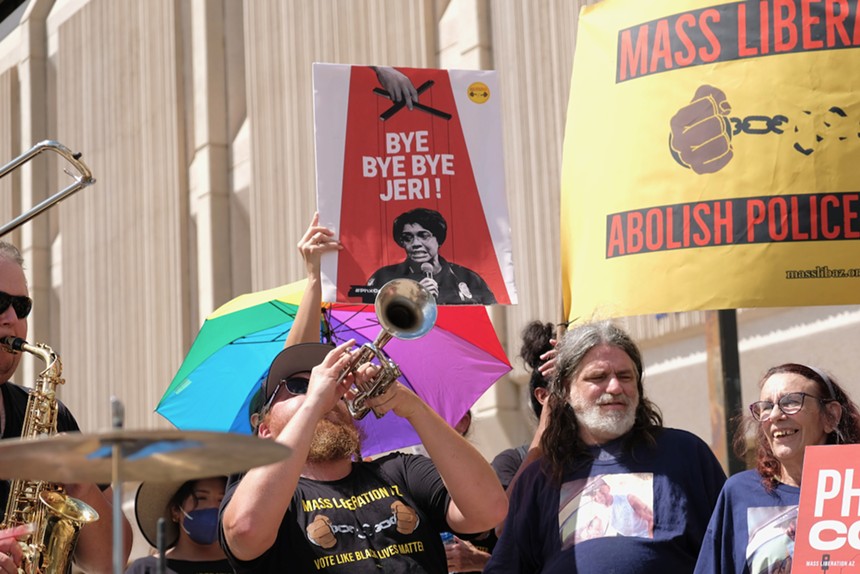 Sullivan arrives at a moment in which activists say they feel a sense of letdown over promised reforms at the department. On Tuesday, Williams delivered a lengthy presentation about policy changes in the department during her tenure to the City Council. She highlighted the further implementation of body cameras and banning chokeholds.

Williams, Human Services Director D.C. Ernst, and Assistant City Manager Lori Bays also offered long-awaited updates on the city's Community Assistance Program and Office of Accountability and Transparency. The assistance program, which Mayor Kate Gallego expanded significantly in 2021, is struggling to get off the ground. The program is an alternative response team to police for people facing mental health crises.

Although the program is slated to have 130 positions two years in, it has hired only 22 people after more than a year — and none since July when New Times asked about hiring. After months of delays, the first unit is now responding to calls and has answered 56 calls in its first six weeks. But there is no timeline for getting the second unit ready, Ernst said. There are supposed to be nine units operating.

The city also provided updates on the Office of Accountability and Transparency, a new oversight board created by the city. The current director, Roger Smith, was hired in November 2021. He told the council on Tuesday that he anticipated filling 15 total positions in the office by January. So far, four of those roles have been filled.

Activists showed up at the meeting to lobby for the city to give the programs a higher priority. "When will you start taking this issue seriously?" asked Jacob Raiford, an activist with the W.E. Rising Project. The group has been pushing the city to create a crisis response program independent of police or fire departments. Raiford said that despite demands for an oversight board of the community assistance program, the city had taken no action to create one.

Anna Hernandez told council members she was frustrated that the city went months without providing information about the reforms. "This is the first time we are hearing these updates. That's a big concern," she said. Hernandez won the Democratic primary in August for state senator in District 24, which includes portions of Glendale and Maryvale. She faces no opposition in the November general election.

Sullivan, who faces a divided department and a distrusting city, said he would attempt to rebuild trust in the department. "I build trust by building relationships internally and externally," he said. "That's conversations. That's people understanding that my motives really are to serve this department and this community."
KEEP PHOENIX NEW TIMES FREE... Since we started Phoenix New Times, it has been defined as the free, independent voice of Phoenix, and we'd like to keep it that way. With local media under siege, it's more important than ever for us to rally support behind funding our local journalism. You can help by participating in our "I Support" program, allowing us to keep offering readers access to our incisive coverage of local news, food and culture with no paywalls.
Make a one-time donation today for as little as $1.