The chain already took its assault-style weapons off the shelves in 2012, after the Sandy Hook Elementary School shooting in Connecticut.

The new ban announced this morning affects Dick's 35 Field & Stream stores, none of which are in Arizona.

Edward Stack, Dick's CEO, said in a statement today that the new move was in direct response to the Parkland, Florida, high school shooting, in which a former student used a semiautomatic rifle to kill 17 children and adults.

Edward Stack, CEO of Dick's Sporting Goods
Carnegie Mellon University
Dick's is making other changes that may affect people who planned to buy other types of guns at the chain's eight Arizona locations, Stack said. The store will also ban "high-capacity magazines" and "bump stocks," and will raise the minimum purchase age for all firearms to 21.

Federal law already prohibits handgun sales to people under 21. But according to a worker in one metro Phoenix Dick's store, none of the chain stores in Arizona carry handguns. They only sell tactical and hunting shotguns, and rifles for hunting and target shooting, he said.

Yet if Arizonans want to buy a semiautomatic rifle or high-capacity magazine, they'll find no shortage of options in this gun-loving state. Residents ages 18 to 20 don't have to drive far to find gun shops that will legally sell them AR-15s, shotguns, or other long guns.

One Arizona gun store manager suggested Dick's was about to lose more customers.

"Sorry for them, and lucky for us," said Lezel Taylor, assistant manager at The Hub, a retail gun store and indoor range in Lakeside.

Few self-respecting Arizona firearms enthusiasts turn to places like Dick's or Walmart for their needs, she said. In any case, The Hub "will never" stop selling firearms like AR-15s, she promised.

Dick's media department didn't immediately return a message from Phoenix New Times seeking clarification of its definition of "high-capacity," how online sales might be impacted in Arizona, and exactly what kind of guns will be affected by the new age limit.

Investigators determined that the Parkland shooter once bought a shotgun from a Dick's store, but didn't use it in the shooting. The Las Vegas shooter may have used a bump stock to achieve rapid fire from a semiautomatic rifle. 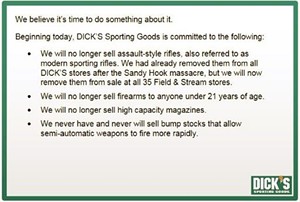 Dick's Sporting Goods new firearms policy.
Twitter
"Some say these steps can't guarantee tragedies like Parkland will never happen again," Stack tweeted. "They may be correct — but if common sense reform is enacted and even one life is saved, it will have been worth it."

Locals posting on the Facebook site Gun Owners of Arizona suggested they'd boycott the chain — if they shopped there to begin with.

"I don't know any gun owners who buy their firearms there anyway," Facebook user Cara Lee of Phoenix wrote on Wednesday. "They've never been to a decent gun shop."

Besides Arizona's plethora of gun shops, Dick's new policy will also have limited effect in Arizona because of the state's permissive firearm laws.

Under federal law, people ages 18 to 20 can't buy handguns from licensed dealers legally. But nothing in Arizona law prevents unlicensed dealers from selling handguns to anyone 18 or older, and federal law allows adults 18 and older to legally possess handguns. Federal law prohibits handgun possession by kids 17 and under, except for possession on family property or for agricultural or ranching duties.

Arizona law also has a gift clause that makes it legal to buy and give a gun to a minor, as long as the minor's parent or legal guardian has granted consent. That means if Dick's has a good sale on a shotgun, an Arizonan 18 to 20 years old need only to find a legal straw buyer.

Although the federal handgun age limit generally applies in Arizona, a person of literally any age can possess a long gun in Arizona.