Highlights of Donald Trump's Arizona Visit: 'You Can't Always Get What You Want'

President Donald Trump held  a campaign rally in Mesa on Friday night, October 19,  at the Phoenix-Mesa Gateway Airport  to encourage supporters to vote for Republicans in the midterm elections, including Arizona Senate candidate Martha McSally.

Here are some of the highlights:

As soon as Trump finished his speech, music was piped into the hangar.  The song by the Rolling Stones:  "You Can't Always Get What You Want."

The Stones' Mick Jagger has asked the president to stop using the band's music.


7:14 p.m.: Outside the Airport, Trump Supporters Showed Their Support for Judge Kavanaugh.


A crowd of Trump supporters, at one point chanting “we like beer,” followed one of the few protestors out of here. #TrumpinAZ pic.twitter.com/Kp8fcFhyhj

Trump said a vote for Congresswoman McSally "will be the second greatest vote you have ever cast ... the  first greatest was for me."

He also criticized McSally's opponent, Democratic Congresswoman Kyrsten Sinema: "She voted to support deadly sanctuary cities. ... and a vote for Kyrsten Sinema is a wasted vote and moreover it's a dangerous vote" because it could return Democrats to power in the Congress.


"we are not crazy here." "we are not a meth lab of democracy." -@marthamcsally #TrumpInAZ #AZSen

We did some fact checking and found nothing to support this claim.


Trump says "the early voting shows that Martha [McSally] is way ahead." I could be wrong, but I don't think they have released any early voter info yet. #TrumpinAZ #AZSen


A few min in, Trump pushing hard for votes for Republicans in Nov.:
- “They’re all talking about AZ, & they’re talking abt Martha McSally” (GOP Senate candidate)
- Calls Democrats “an angry unhinged mob”
- “Your vote in this election will decide which party controls Congress”

The president brought the partisan crowd to their feet when he said:

"This November, vote for the jobs, not the mobs."

Then he took a shot at potential rival Elizabeth Warren, a Democratic senator, who recently took a DNA test that showed she had only a tiny percentage of Native American ancestry. "We can no longer call her Pocohontas ... she has no Indian blood.  We'll have to come up with another name for her." 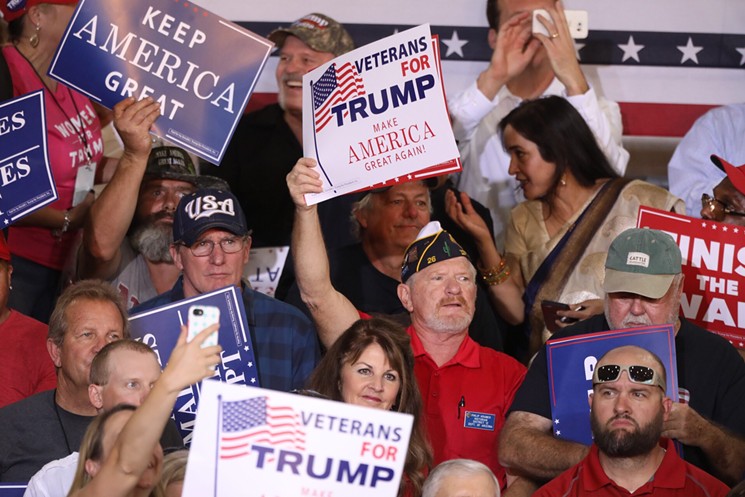 The crowd is fired up as they await their president.
Jim Louvau


The smell of horse manure/animals is wafting through the press area (and I’m guessing the rest of the hangar too) at the #trumpinaz rally. Beat It is rocking through the speakers. The sun has finally gone down and it’s cooling off. Trump scheduled to speak soon pic.twitter.com/nrK7x83X5v

“Today, under President Trump, our economy is booming thanks to historic tax reform,” Ducey said.

He said that Trump is “wiping away useless regulations and has set the American economy free.”

Ducey raised the specter of “activist judges” and said that they are grateful for Supreme Court justices Brett Kavanaugh and Neil Gorsuch, both Trump appointees.

The governor also gave a shout out to Senate candidate Martha McSally — a former combat fighter pilot, McSally has been fighting for her country her entire life, Ducey said.

Who better to send to Washington, D.C., to straighten out politicians than a fighter pilot, Ducey asked.

In the end, Trump was still nowhere close to taking the stage by the time Ducey’s speech was over and the governor left the stage.

Arizona Congressman Andy Biggs, who represents the Fifth District, where the rally was held on Friday, took to the stage after Republican Secretary of State candidate Steve Gaynor and Arizona Republican Party chairman Jonathan Lines.

Biggs listed President Trump’s accomplishments. He said that President Trump is the most pro-life president in history, plus the economy has more people working than ever before.

He said that Congress needs to pass a bill Biggs introduced to build the border wall, to which the crowd responded with a chant.

Biggs said they need Martha McSally in the Senate and to keep the House of Representatives red.

He ran down a list of Republican nightmares if Democrats take the House: impeaching Trump; abolishing ICE; buoying people like Nancy Pelosi and Maxine Waters.


Stage is set for Trump in Mesa, AZ. Current song playing over the loudspeakers: “Sympathy for the Devil.” pic.twitter.com/MqNZaZRBkw


4:26 p.m.: Protesters From Both Sides Are Lining Up Outside Mesa Gateway Airport

Here at the Trump rally in Mesa, a small contingent of Proud Boys, the violent SPLC-designated hate group that participated in brawls in New York this week. #TrumpInAZ pic.twitter.com/ne3DV0E8Pq


PARKING UPDATE (3:50 PM): Presidential event parking is now at capacity. There will be no alternative parking available. #TrumpInAZ pic.twitter.com/kFqxfz1PCo

3 p.m.: Watch This Reminder of Trump's Last Visit to Phoenix.