15 Arizona Celebrities Who We Hope Will Run for Office (Could They Do Any Worse?)

Alice Cooper is the people's choice as a Arizona celebrity politician ... as long as he doesn't run as Vincent Furnier. Jim Louvau

Ronald Reagan, Donald Trump, Al Franken, Arnold Schwarzenegger, and Melissa Gilbert – to name a few – all have something in common. They all made the switch from a career in show business to a career in politics.

Then on March 19, Sex and the City actress Cynthia Nixon (no relation to Richard) announced she would run for governor of New York against incumbent Andrew Cuomo.

Some celebrities may do great things in office, others surely will not, but to each their own. Since it's become popular for celebrities consider running — or even fans suggesting it happen (The Rock, Oprah, Tom Hanks, etc.) — we wanted to come up with a list of Arizona celebrities and the position we believe they should run for in the next viable election. 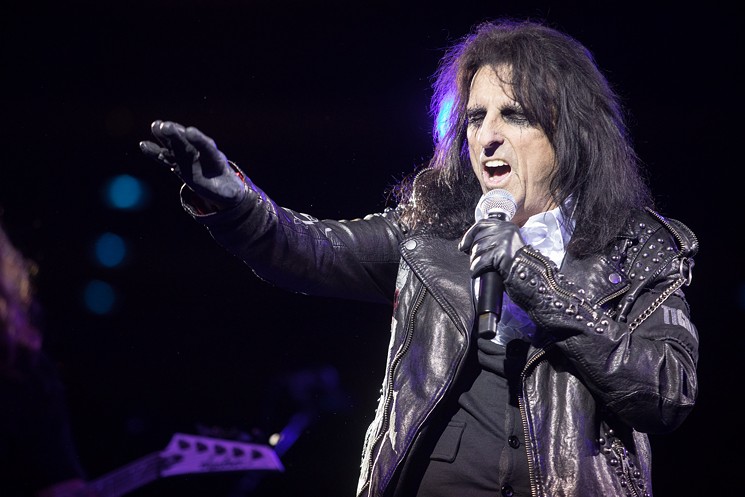 Alice Cooper is the people's choice as a Arizona celebrity politician ... as long as he doesn't run as Vincent Furnier.
Jim Louvau

U.S. Senators
Alice Cooper: Back in July 2017, we posted a question to Facebook asking who should run for Senate in Arizona given the news at the time that Kid Rock was thinking of making a run in his home state of Michigan (spoiler: It ended up not being true). The most popular name we received was Alice Cooper, and honestly he would be perfect as long as he doesn't run under his birth name, Vincent Furnier.

Now of course, Arizona – as well as every other state – has two senators, so who else would be a perfect fit in this position than the most-loved athlete to ever play for an Arizona sports team?

Larry Fitzgerald. If there's one thing fans know about him, he will never give up on Arizona ... even when he should. He's been loyal for his entire career to the Arizona Cardinals and can perform well in any situation. Isn't that what you would want from your senator? Someone who will work tirelessly to keep his supporters happy. Would he get your vote? Senator Larry Fitzgerald does have a nice ring to it.

U.S. Representatives
Yes, we are aware there are nine seats to fill, but we have too many positions to get to, so here are five worthy of your consideration.

Ted Danson: Everybody knows his name in Flagstaff.
Photo by NBC/Justin Lubin/NBC - © 2016 NBCUniversal Media, LLC
Ted Danson (AZ-01). Flagstaff has a great beer scene, and if there's one thing you think of when it comes to future Congressman Danson, it's his role as Sam Malone on Cheers. If you want to go where everybody knows your name, head to his hometown of Flagstaff and vote him in for the House. Though he was born in San Diego, he was raised in State 48, and he might have an opinion on a potential wall between Arizona and California.

Savannah Guthrie (AZ-03). Guthrie spent a lot of her life in Tucson – she lived there while young, attended University of Arizona for journalism, was a member of a sorority, and eventually went to law school at Georgetown University before eventually making her way back to Tucson for a job with NBC-affiliate KVOA. She may be the host of the Today Show on NBC with Hoda Kotb, but it's pretty inevitable she will come back to her roots and run for Congressional District 3.

Maynard James Keenan is more likable than Paul Gosar.
Jim Louvau
Maynard James Keenan (AZ-04). EDIT 3/27 12:18 p.m.: Keenan tweeted at us saying he has lived in Jerome since 1995, so he is officially a local. All the more reason for him to run... Though he is technically not from Jerome, the veteran Tool vocalist does own a wine-tasting room there, and that's enough of a reason for us to think he's a good fit to contend against Paul Gosar. He has a winery, so his family probably likes him, which is more than we can say for Gosar.

Would Emma Stone be too liberal for Scottsdale?
Dale Robinette
Emma Stone (AZ-06). She grew up in Scottsdale, and is the only actor from Arizona to win an Oscar. That's got to win you some points, right? Besides think how jealous it would make Trump, who always coveted an Emmy. Her political viewpoints won't help her much, if at all, in Scottsdale, but SHE WON AN OSCAR, PEOPLE! Plus, it would be cool to see her reunite in the House with fellow high school student ...

Aidy Bryant (AZ-09). She and Stone both attended Xavier College Preparatory, though Stone dropped out after her freshman year. Bryant's Saturday Night Live experience may come in handy if she ever has to think on her feet in a situation. Plus, it doesn't hurt that she does a killer impression of Sarah Huckabee Sanders.

Wonder Woman would make a wonderful governor.
Warner Bros. Television
Governor
Lynda Carter. Plain and simple, nobody would be better to hold the top state-level political position than the OG Wonder Woman. She is set to (finally) receive her star on Hollywood Walk of Fame on April 3, but after she will be ready to defeat any foe she comes across because she's a total badass and Amazonian warrior.

Maricopa County Sheriff
Charles Barkley. Who better than Sir Charles, really? This is probably the most perfect fit out of anybody on here. Joe Arpaio thinks he was America's Toughest Sheriff? Did he ever throw someone through a plate-glass window? I don't think so! (Although, would it be surprising if he actually did?) Barkley did it because the person threw ice at him. So he clearly doesn't like ICE. In this new position, Barkley would have even more to talk about with Shaquille O'Neal, who plans to run for sheriff in Atlanta in 2020.


Attorney General
Jodi Arias. Do we even need to go into detail? Who has spent more time in the courtroom?

The Phoenix Suns gorilla would be a thrilla in office.
Jim Louvau

Phoenix New Times' Twitter is blocked by Bill Montgomery.
Screenshot by Dillon Rosenblatt
Mayor of Phoenix (or any other city)
Grumpy Cat. Grumpy Cat, whose real name is Tardar Sauce, is from Morristown, Arizona, for those who didn't know. Wouldn't you want a cat in charge? Bosco the Dog was elected as honorary mayor in Sunol, California, in 1981, so why not Grumpy Cat, who is arguably the most famous living animal? Granted, Sunol has a population of 913 as of 2010, which is only slightly less than Phoenix's 1.6 million people.

County Recorder
Linda Ronstadt. She's known for recording great music (inducted into Rock and Roll Hall of Fame in 2014) so she surely she can be a county recorder, right?

Director of Arizona Department of Health Services
Mary Louise-Parker. Known for selling and growing marijuana on hit show Weeds as Nancy Botwin. So she would be perfect to oversee Arizona's medical marijuana industry.

State Treasurer of Arizona
Windfall Willie. He could just submit his old commercials as campaign ads.

KEEP PHOENIX NEW TIMES FREE... Since we started Phoenix New Times, it has been defined as the free, independent voice of Phoenix, and we'd like to keep it that way. With local media under siege, it's more important than ever for us to rally support behind funding our local journalism. You can help by participating in our "I Support" program, allowing us to keep offering readers access to our incisive coverage of local news, food and culture with no paywalls.
Make a one-time donation today for as little as $1.
Dillon Rosenblatt was the social media editor at Phoenix New Times from 2016 to 2018. Originally from New Jersey, he is a graduate of Arizona State University's Walter Cronkite School of Journalism and Mass Communication.
Contact: Dillon Rosenblatt
Follow:
Twitter: @DillonReedRose