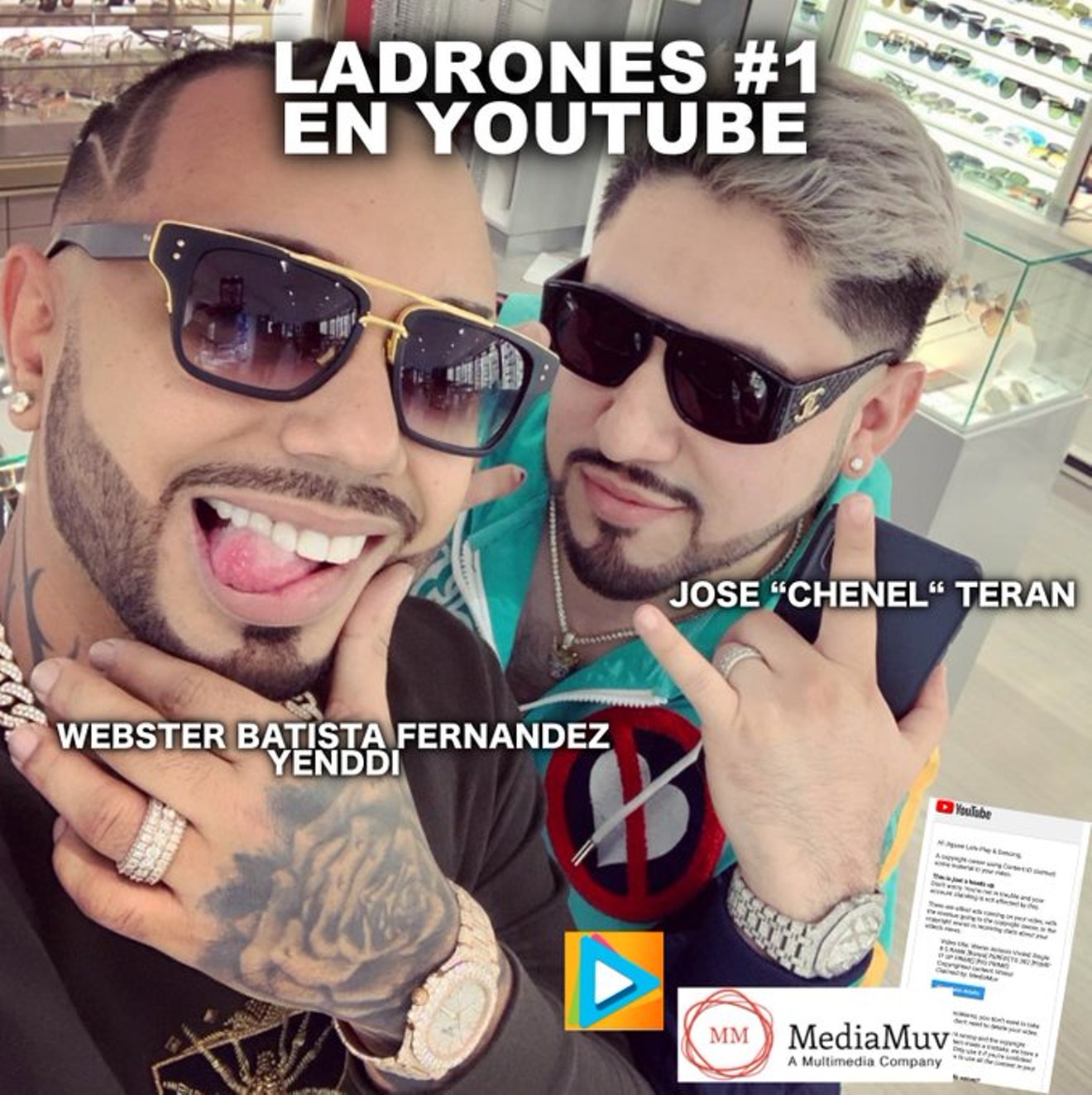 Miami-area resident Webster Batista and his co-conspirator Jose Teran in Phoenix are accused of generating $20 million by ripping off musicians on YouTube. Screenshot via @fuckmediamuv
Jose Chenel Teran and Webster Batista appeared on social media to have it all, after building an online music business empire worth millions: expensive cars, flashy jewelry, properties in Miami and Phoenix.

What they didn't have was any legal right to the 50,000-plus songs they claimed to own over the past four years, in what feds allege was a scam that cost real artists and content creators more than $20 million.

Federal authorities arrested Batista, who also goes by the pseudonyms Eniel Gaetan Hernandez and Yenddi, in the Miami suburb of Doral, on November 18, on charges of wire fraud, money laundering, aggravated identity theft, and conspiracy. He posted $150,000 in bail plus a $100,000 bond cosigned by his mother and was ordered by a federal judge to remove himself to Phoenix earlier this month, where he awaits trial in January alongside Teran, his alleged co-conspirator.

Teran purchased a 5-bedroom house now worth nearly $1 million in a gated community in the Sonoran Foothills in North Phoenix, records show.

The pair appeared in federal court in Phoenix on December 1. If convicted, the men in their mid-30s could spend about 35 years in prison.

Through their Phoenix-based business, MediaMuv, LLC, along with numerous shell companies and fake identities, Batista and Teran pretended to be the owners and creators of a vast media library of more than 50,000 songs, federal prosecutors allege. Batista and Teran claimed a wide swath of genres, including Spanish pop and anime video game soundtracks, and they reaped in $20,776,517 in royalties from YouTube without paying the real owners a penny, feds allege.

The case highlights a serious weakness in YouTube's copyright policy.

According to a federal grand jury indictment, Batista, who is a citizen of the Dominican Republic, and Teran, of Phoenix, entered into a contract with a royalty-processing company identified as "A.R." on April 21, 2017. In the contract, the two claimed their company was the "writer, author, publisher, copyright holder, and creator" of thousands of songs, and that their content would not infringe on any copyrights or trademarks.

The two claimed to have permission to upload more than 50,000 songs, including several tracks from Spanish artists ranging from the 1970s to the early 2000s. They claimed ownership over songs like "La Quise Tanto" by Los Caminantes (for which they received over $30,000 in royalties), and 1979's "Me Llamas" by Juan Luis Perales, which earned them over $100,000 in revenue from YouTube, even though they had no real ownership of the tracks, prosecutors say.

The federal indictment includes a table listing artists whose music MediaMuv claimed to own, and how much money in royalties Batista and Teran allegedly raked in. Only the artists' initials are written in the indictment, though they correspond with artists who performed songs listed elsewhere in the document. The table says, for instance, that MediaMuv received $132,702.45 in royalties from songs by J.L.P., which would correspond to Juan Luis Perales, who performed the aforementioned "Me Llamas."


Artists and content creators caught on to the scam and began posting complaints about MediaMuv online.

In an online Spanish YouTube help forum, users began posting as early as May of 2017 alleging that MediaMuv was stealing their music.

"Hello friends, I want to make a claim on this forum, as it's been several days since a business called MediaMuv started stealing content from my channel and other users. Does anyone know anything about this business?" one user wrote on May 17, 2017. "MediaMuv claims videos as their own."

In response, a forum moderator directed users to file a formal complaint through YouTube's Content ID process and linked to pages with more information.

According to the indictment, when an artist contacted MediaMuv's royalties processor "A.R.", claiming MediaMuv was infringing on their copyright, Teran told the company that any copyright claims should be directed to him for his own vetting.

"Any issue that D.H. have [sic] with our content, he can deal with me directly, we will not issue any revenue share to him or anyone just because he says he has the rights to, we have contracts, and if he have [sic] doubts we can keep discussing this in front of a federal judge thanks," Teran emailed the royalties company.

"Be careful with these YouTube content thieves," @fuckmediamuv tweeted in its initial post, which was accompanied by photos of the two defendants with graphics of cartoon burglars and rats. "They live in Phoenix, Arizona."

In 342 tweets posted over nearly four years, the page documented its claims with photos of Batista, Teran, and those in their circle posing with expensive cars and properties, and retweeted complaints from YouTube content creators about MediaMuv.

The account posted photos of the luxury cars, including Teslas and BMWs, that the indictment states Batista and Teran bought with ill-gotten gains from MediaMuv. @Fuckmediamuv also frequently posted about two related parties who allegedly assisted the pair in laundering money.
By 2019, the alleged fraudsters were branching out beyond songs by musical artists, claiming copyright over soundtracks of popular video games.

In April of 2019, YouTube user Ronald McOn[E]Punch published a video titled, "Attention all YouTubers who use Doki Doki Literature Club content, beware of these false claims!"

Doki Doki Literature Club is a popular visual-novel game featuring schoolgirls in a Japanese anime aesthetic. The majority of the music for the game was composed by game developer Dan Salvato, but YouTubers who made videos of themselves playing the game or using the game's music would receive Content ID claims from MediaMuv saying they owned the rights to the music and therefore had the rights to any ad revenue from the content.


We've been getting reports that MediaMuv and AK Music are falsely claiming YouTube videos containing music from Doki Doki Literature Club. DDLC music is composed and owned fully by Team Salvato (Dan Salvato LLC). Please dispute these fake claims, and we'll look into it too.

YouTube's Content ID system uses software that scans videos for copyrighted content such as music and cross-references the material with its database of content claimed by owners. A copyright owner is then alerted that his or her content is being used in someone's video, whereupon the owner can choose to have the video taken down or allow the video to stay up but claim all of the ad revenue from that user's upload.

YouTube content creators have complained for years that the Content ID system is too sensitive and does not follow the U.S. legal doctrine of fair use that allows people to use copyrighted material if they do so in a transformative way, such as making fan-edited videos of scenes from popular games.

YouTube executive Katherine Oyama testified before the U.S. Senate in 2020 that the majority of videos claimed through Content ID were monetized rather than removed, and that YouTube had paid out more than $5.5 billion in ad revenue to copyright owners through the system. YouTube itself reportedly also gets a cut of this claimed revenue, making the software a cash cow for the Google-owned subsidiary.

The U.S. Internal Revenue Service and the Department of Justice finally caught up with Batista and Teran in November and charged them with 15 counts of wire fraud, seven counts of money laundering, and seven counts of identity theft, as well as one count of conspiracy. The two were ordered to forfeit any and all assets involved in their offenses should they be convicted on any of the 30 counts against them. That included Teran's property in Phoenix, both men's bank accounts, including a savings account under Xpace World Music Corp, a 2017 Tesla X 100D, and a 2014 BMW i8.

In a video published about MediaMuv on December 4, after Batista and Teran were arrested, YouTube user Mental Outlaw summed up the alleged scam and the circumstances that facilitated it.

"Obviously these guys are scumbags for running this scam, stealing money from other content creators on the platform, but also YouTube is also a scumbag for designing a Content ID system that can so easily be manipulated and allow a scam like this to happen," Mental Outlaw said.