Teleos Prep, a K-8 Great Hearts school, will close permanently, according to a school representative. Joseph Flaherty
The website for a much-hyped south Phoenix branch of charter operator Great Hearts Academies disappeared on Wednesday, raising new questions about what will happen to students at a shuttered Great Hearts school near downtown Phoenix.

Officials from Great Hearts are silent on how they plan to move forward following the collapse of the chain's South Mountain acquisition plan.

Great Hearts recently fumbled a decision to move students from the K-8 school at 14th and Jefferson streets, Teleos Preparatory Academy, to a new building on the campus of South Mountain Community College. Great Hearts sought to lease this building at South Mountain Community College. The governing board denied the proposal.
Joseph Flaherty
The website for the proposed South Mountain school, known as Archway Classical Academy South Mountain, now redirects to the main Great Hearts page. Great Hearts also deleted a YouTube announcement video that was sent to Teleos parents in April. In the video, Great Hearts Arizona President Erik Twist was filmed standing in the building’s gym while touting its classrooms and athletic facilities.

Great Hearts would not give a detailed explanation of the ill-fated plan to expand to south Phoenix. In an email, digital media manager Shannon Richards said that the network was "communicating" with students' families.

On Tuesday, Bill O’Dell, a Great Hearts spokesperson, said in an email to New Times, “We don’t intend to close Teleos. We continue to pursue the South Mountain opportunity.”

But a Teleos representative contradicted O’Dell on Thursday when asked whether Teleos is enrolling students for next year.

“It’s closed permanently,” she said, adding that Great Hearts is searching for a new school site.

When Richards was asked about the closure, she maintained that Teleos is merely moving to a new location, with a new name.

"We had no intention of closing Teleos," Richards wrote. "We were working to give it a new home: Archway South Mountain. We still intend to do this for the fall of 2019."

In other words, Teleos is changing its name, moving to a new location, and Great Hearts has no idea where that final location may be. But it's not closing, as Great Hearts says.

Charter officials will make room for Teleos students who want to attend other Great Hearts schools this fall, Richards said. Although MCCCD and Great Hearts had agreed on terms for a building purchase in April, she said, the district denied Greats Hearts a long-term ground lease one month later.

"We continue to work with MCCCD on the possibility of a partnership," Richards wrote. "We are disappointed that resolution couldn’t be reached in time for this coming school year."

Because Great Hearts will not move into the South Mountain campus this fall, officials said, they removed the Archway South Mountain website and video.

Teleos is the network’s closest school to downtown Phoenix. The proposed South Mountain school site, near 24th Street and Baseline Road, used to be the location of Hope Academy, a public school where nontraditional students could complete their high school education or receive career training.
A public charter chain, Great Hearts operates 28 schools in Arizona and Texas and offers a classical liberal arts education. The network is known for its academic rigor — students learn Latin and Greek — as well as the conservative leanings of its board and leadership.

On May 22, the governing board of the Maricopa County Community College District, which oversees South Mountain, denied Great Hearts’ proposed lease of the property. The vote was unanimous. Laurin Hendrix, the president of the governing board told New Times that he doesn’t expect the two parties to reach a deal before the fall semester. 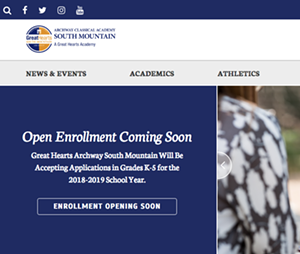 The website for a new Great Hearts school in South Phoenix went offline on Wednesday.
GreatHeartsAcademies.org
Meanwhile, the headmaster of Teleos departed last month. According to her LinkedIn page, former Teleos principal Christina Lucas-Sheffield no longer works for Great Hearts as of May.

It’s not the first time that Great Hearts has encountered resistance while trying to acquire new properties: In September 2017, Great Hearts offered to spend millions to develop a park on city land in Scottsdale, only to back off after City Council members said they opposed the Great Hearts plan because of the charter chain’s discriminatory policy toward transgender students.

Although Great Hearts says Teleos students can attend other Great Hearts schools as a “contingency," the 2018-19 school year is two months away, and a last-minute accommodation plan likely won't work for everyone.

Paul Goss, a Teleos parent, is planning to send his eighth-grade daughter to a different charter school because there are no nearby Great Hearts schools where they live and work.

Goss told New Times last week that Teleos parents have been left in the dark on the status of the new campus. He was forced to confront Lucas-Sheffield in late May after he heard rumors from his daughter that the new South Mountain school would not accept seventh- and eighth-grade students.

He was bewildered by the lack of communication from one of the most well-known charter operators in Arizona.

“It was two days before the end of school, and she’s just hearing rumors from other kids,” Goss said.
KEEP PHOENIX NEW TIMES FREE... Since we started Phoenix New Times, it has been defined as the free, independent voice of Phoenix, and we'd like to keep it that way. With local media under siege, it's more important than ever for us to rally support behind funding our local journalism. You can help by participating in our "I Support" program, allowing us to keep offering readers access to our incisive coverage of local news, food and culture with no paywalls.
Make a one-time donation today for as little as $1.