The Watkins Jail, one of six jails operated by Maricopa County, has a 1,600-bed capacity. James Deak
Since the onset of the pandemic in 2020, staffing vacancies have ravaged Maricopa County's jails.

County officials said that they are taking action to address the dwindling staff numbers — and the turmoil the problem has created. But according to the most recent figures provided to New Times, the situation is only getting worse.

As of mid-July, Maricopa County Correctional Health Services, which provides health care to people housed in the jails, had a vacancy rate of about 25 percent, or 137 out of 539 positions.The vacancy rate is higher among nursing positions; 68 positions out of 179, or 38 percent, were not filled.

That’s an increased rate from May, when CHS saw a vacancy rate of 24 percent. It's about the same as it was in November 2021, when a team of consultants warned that correctional health at the jails was “operating under crisis standards of care” due to understaffing.

Overall detention staff, meanwhile, is seeing a vacancy rate of about 26 percent. Among the nearly 1,900 detention officer positions, nearly 28 percent — more than 530 — are unfilled.

The alarming vacancy rate among jail health care and detention staff comes as the number of people in the county's six detention facilities has increased significantly over the past year. The population has grown from around 6,200 in November 2021, when it was still kept low due to pandemic concerns, to 7,500 as of August 5, according to MCSO spokesperson Monica Bretado.

This has overwhelmed staff, according to county employees.

"There are too many patients to treat," said one registered nurse who currently works at CHS. The nurse spoke with New Times on the condition of anonymity since they are not authorized to speak with the press.

The sheriff's office said that the increasing number of people in county jails is beyond the agency's control and that its hands are tied even during the staffing crisis.

"Although MCSO is responsible for operations involving the county jail, reducing incarceration or jail populations would involve other agencies and changes [at the] legislative and judicial level," Bretado said.

In the past, though, the sheriff's office has taken steps to do so. During the pandemic, detention officials touted their "proactive" efforts to reduce the number of people in the jails in an effort to mitigate the spread of COVID-19.

"We have taken aggressive steps within our control and in collaboration with the judicial system to reduce our daily population from approximately 7,100 to about 6,258 as of today," according to a November 2021 post on MCSO's website.

Bill Gates, chair of the Maricopa County Board of Supervisors, previously has declined to speak with New Times about issues at the county jails. The county manager is responsible for correctional health, while Sheriff Paul Penzone oversees the jails. Gates again declined an interview request for this story.

Fields Moseley, a spokesperson for the county, said this was because health at the jails was a “county operations” matter. Moseley declined to make anyone else at the county available for an interview. But he said the county was making extensive efforts to bolster recruitment and hiring. The most recent budget for correctional health, passed by county supervisors in June, includes $210,000 for signing bonuses for some health staff — a small slice of the department's $90.9 million budget. The bonus is $3,000 after three months for registered nurses and $1,500 after three months for vocational nurses, or LPNs. It was implemented for registered nurses last year and remained the same with the new budget. For most nurses, wages have increased over the last year by $2 to $3.50 an hour.

So far, though, the incentives have not been enough to beat back the jails’ staffing crisis, which is not helped by a nationwide health care worker shortage. The bonuses also pale in comparison to other recruiting campaigns in the Valley — such as Phoenix's pay raises to recruit cops, which for officers could mean as much as $27,000 more a year.

"Guess what? Everybody’s offering bonuses to sign on. And if you go to the hospital, it’s higher pay," said the CHS nurse, who is unsatisfied with the county's action on the issue. By increasing the jail population to pre-pandemic levels given the staffing shortages, the nurse said, the county was creating risks — for patients and employees, who could face liability.

Staffing shortages among health care workers at the jail are made worse by the vacancies among detention officers, according to people who work in the jails. Without officers to bring inmates to and from the medical clinic, or to accompany nurses on their walks, medical care becomes more inaccessible. Medical posts that are supposed to be staffed by detention officers are left vacant frequently, the nurse said.

“People keep quitting, and no one is being hired to replace them,” said a Maricopa County detention officer, who also spoke on the condition of anonymity. “We are so short-staffed on the detention side that we can’t staff medical escort positions.”

The lack of detention officers leads to lockdowns and unstaffed medical posts.

One June shift summary obtained by New Times demonstrates this impact. “For the safety and security of the facility and all, [Lower Buckeye Jail] levels 1, 2, and 3 were placed on security override,” the sergeant wrote, saying that 19 duty posts in the jail had been left vacant, including six medical assignments. 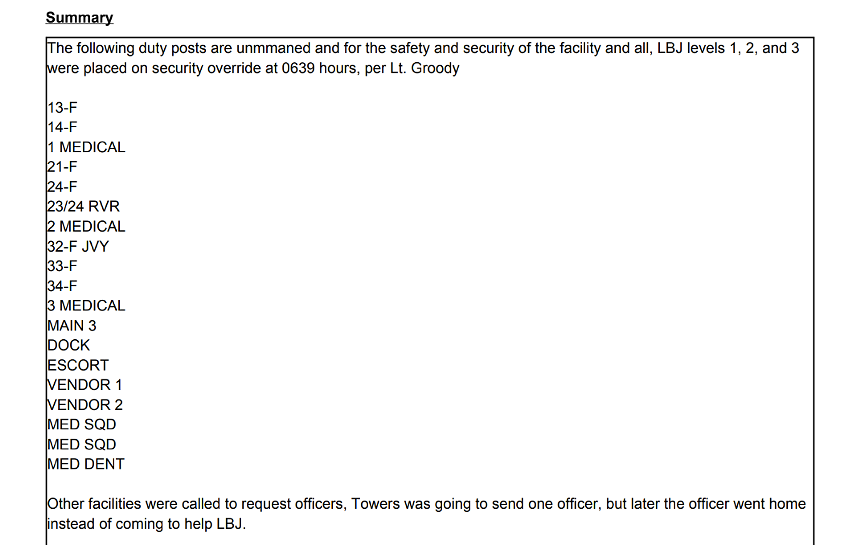 A shift summary showing that 19 posts were left vacant in Lower Buckeye Jail recently.
New Times source
A June investigation by New Times found that the county brought in a team of consultants to audit Correctional Health Services. The consultants found serious problems and released recommendations to increase staffing and fix the issues, which included nearly 40 occasions when no inmate in an entire jail received their medications.

"Numerous clinical staff reported in interviews that they have missed medication passes on several occasions," the consultants found. When they looked at the available data, they found that med passes were missed 38 times in the three-month period of September through November.

At the time, county officials said they were acting on the recommendations suggested in the report.
KEEP PHOENIX NEW TIMES FREE... Since we started Phoenix New Times, it has been defined as the free, independent voice of Phoenix, and we'd like to keep it that way. With local media under siege, it's more important than ever for us to rally support behind funding our local journalism. You can help by participating in our "I Support" program, allowing us to keep offering readers access to our incisive coverage of local news, food and culture with no paywalls.
Make a one-time donation today for as little as $1.